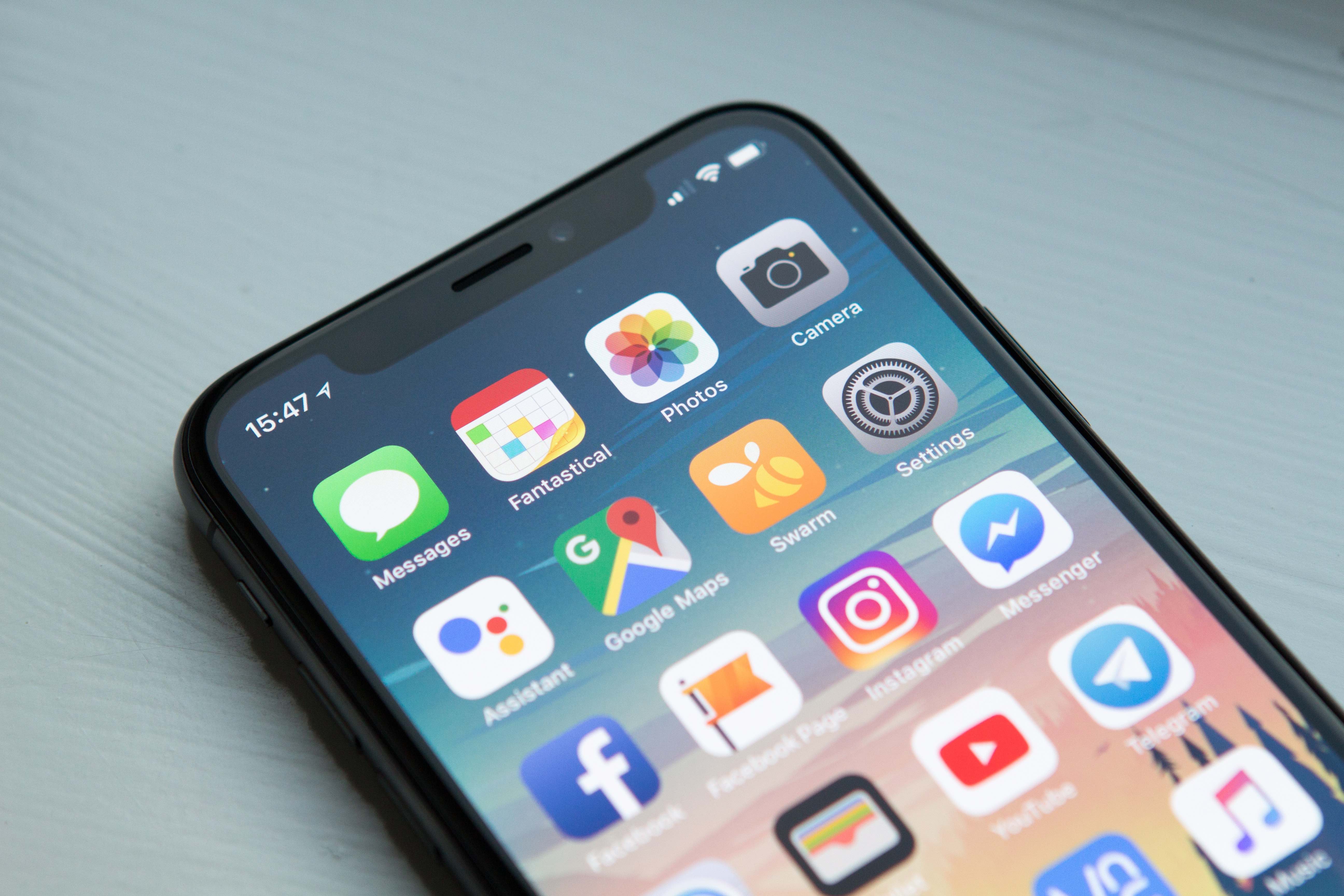 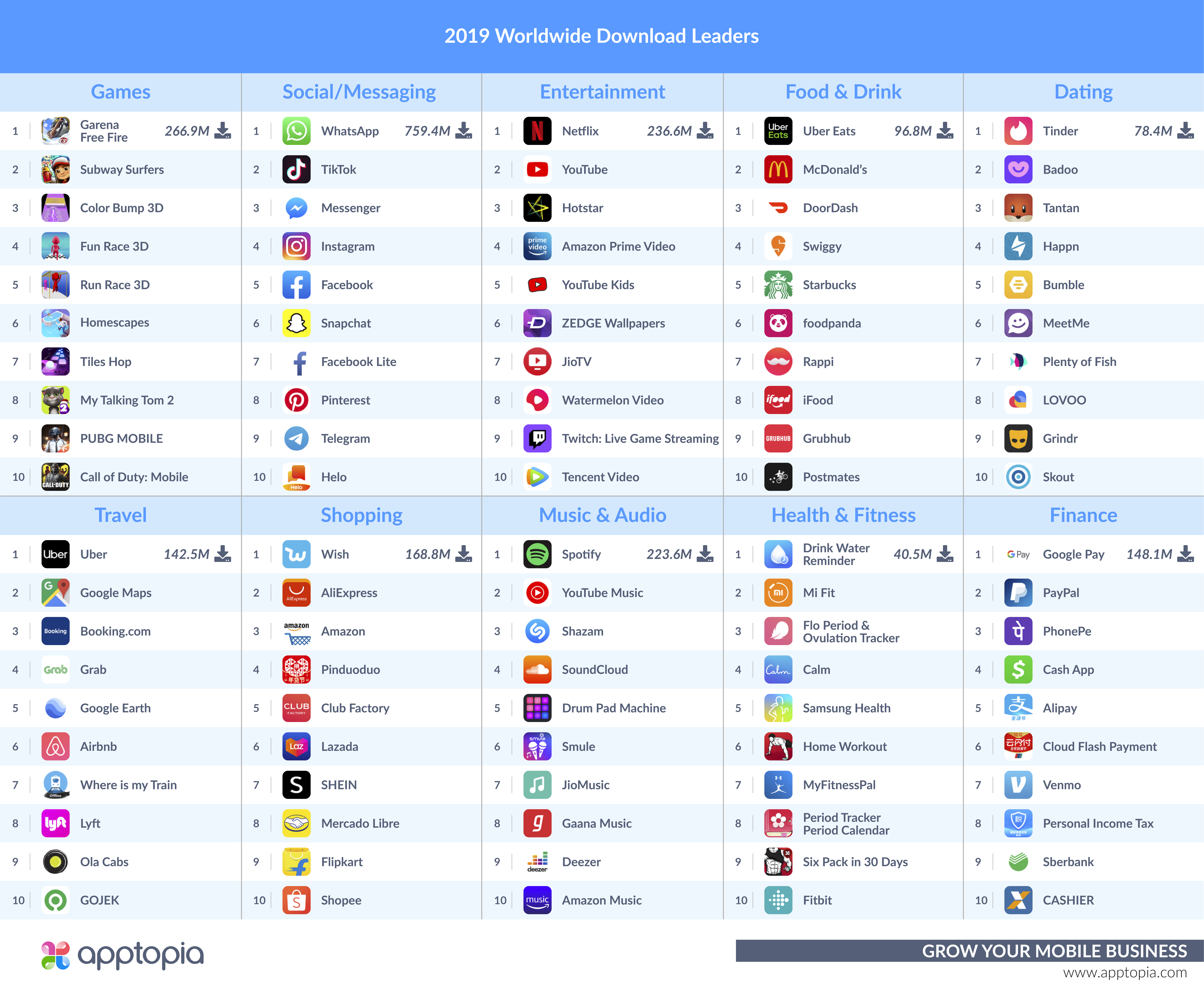 Rather watch it than read it? John Koetsier of TechFirstDraft and I break it down.

I’m providing a few sentences about each category below, but there are so many storylines in this chart that it’s more fun for me to see what your takeaways and themes are after looking at it. You can compare it to the 2018 worldwide download leaders as well. Ask questions and leave me comments on Twitter (@adamblacker25) and I’ll get back to you.

With the exception of Dating, all of these are based purely on real app store categories and not self-created categories. Dating is a category on Google Play but not on the App Store. Some of the top dating apps choose not to list themselves in the category anyway.

Games: I’ve never played Subway Surfers but at this point I have to try it out. It has more than 1.5 billion lifetime downloads and is at the top of this list every year so they’re doing something right. I’ve buried the lead though - Garena’s Free Fire takes the #1 spot as a battle royale game not named PUBG or Fortnite. The game is very popular in India, Brazil and Indonesia. Four of these games are what I would classify as hypercasual. Last year, the only match 3 game to make our top 10 was Candy Crush Saga and this year the only one to make it is Homescapes.

Social/Messaging: Facebook owns 5 of the top 10 apps. If Evan Spiegel hadn’t turned down $3 billion, it would have owned six (Snapchat). We estimate TikTok to have 682.2 million downloads in 2019 and this does not include third party Android stores like those commonly found in China. Helo, which is an app I had not heard of, breaks into our top 10 for the first time. It’s almost exclusively used in India and launched in June 2018.

Entertainment: Netflix stays in the #1 spot by a healthy margin. After all, spending billions of dollars on content should come with some rewards. Hotstar rings in at #3, an Indian streaming video on demand platform owned by Disney. JioTV is also an Indian streaming service. Watermelon Video and Tencent Video are impressive as they are Chinese apps and data for them is iOS only. Disney+ has only been out since November 12 and so even though it has been downloaded tens of millions of times already, it fell about 10 spots short of making it into our top 10 for the year.

Food & Drink: Food delivery apps account for 8 out of the top 10 in our list. Uber Eats is the clear winner in food delivery; this is largely due to it being available in the most markets by far. McDonald’s and Starbucks have separate/individual apps for almost every country or region they operate in. Because of this, we combined all of their apps to create one download number and get an accurate picture of their impact.

Dating: Tinder surpassed its next closest competitor, Badoo, by a healthy margin of 30.8 million downloads. Match Group gets on the board with Tinder and Plenty of Fish, while MagicLab matches with two of its own in Badoo and Bumble. Tantan, which came in third with 39.3 million downloads, is an app I dubbed the Tinder of China in a newsletter earlier this year.

Travel: Uber takes the cake, no surprise here. I am surprised that Booking.com is the only OTA (online travel agency) to make the top 10. Are people booking direct? We estimate Booking.com to have 11.2M more downloads in 2019 than Airbnb, and this Fortune article claims Booking.com is beating Airbnb at its own game. For those of you wondering, the Where is my Train app is only used in India where the app claims to be a “unique train app that displays live train status and up-to-date schedules. The app can function offline without needing Internet or GPS.”

Shopping: Wish won the downloads battle for Shopping apps in 2019 with almost 170 million. AliExpress, the next closest app, registered around 109 million downloads. Wish won by a healthy margin as they are the highest volume advertiser on mobile within the Shopping category. There is a strong Chinese presence in the top 10 Shopping apps with AliExpress, Pinduoduo and SHEIN. Pinduoduo is perhaps the most impressive as 99% of its downloads are from China and it is iOS only as Google Play is not available in China. Apptopia does not track third party Android stores.

Music & Audio: The lineup here is almost exactly the same as the 2018 lineup. Spotify and YouTube Music are the clear leaders here as there is a big gap between them and numbers 3-10. If we add Spotify and YouTube Music's downloads together, they come in just shy of the combined downloads of numbers 3-10. However, the most notable thing to me is that Pandora has fallen off the list this year.

Health & Fitness: I did not expect an app reminding people to drink water to be the most downloaded for this category. I get thirsty often so I’ve never understood the need to set reminders for this type of thing, but what do I know? We see two ovulation-tracking apps in the top 10. You can read more about the growth of those in Madeline’s very recent blog post. Mi Fit, the #2 ranking app here has a strong international presence with no majority ruling market. Its top market over the course of 2019 was Russia with just 13.1% of its total downloads. China, India, and Brazil are the next largest markets by downloads (in that order), as MiFit is building itself a BRIC house.

Finance: Google Pay (includes Tez, which Google acquired) is a beast and saw 140% more downloads than its next closest competitor in PayPal. Google Pay owes most of these downloads to the India. India is also the sole market of our #3 app, PhonePe, which is owned by Walmart. Alipay, Cloud Flash Payment and Personal Income Tax are Chinese apps. Sberbank is a Russian bank and Cashier is a Brazilian app that enables users to access multiple financial accounts through one login.