8 scary mobile trends that will give you the chills 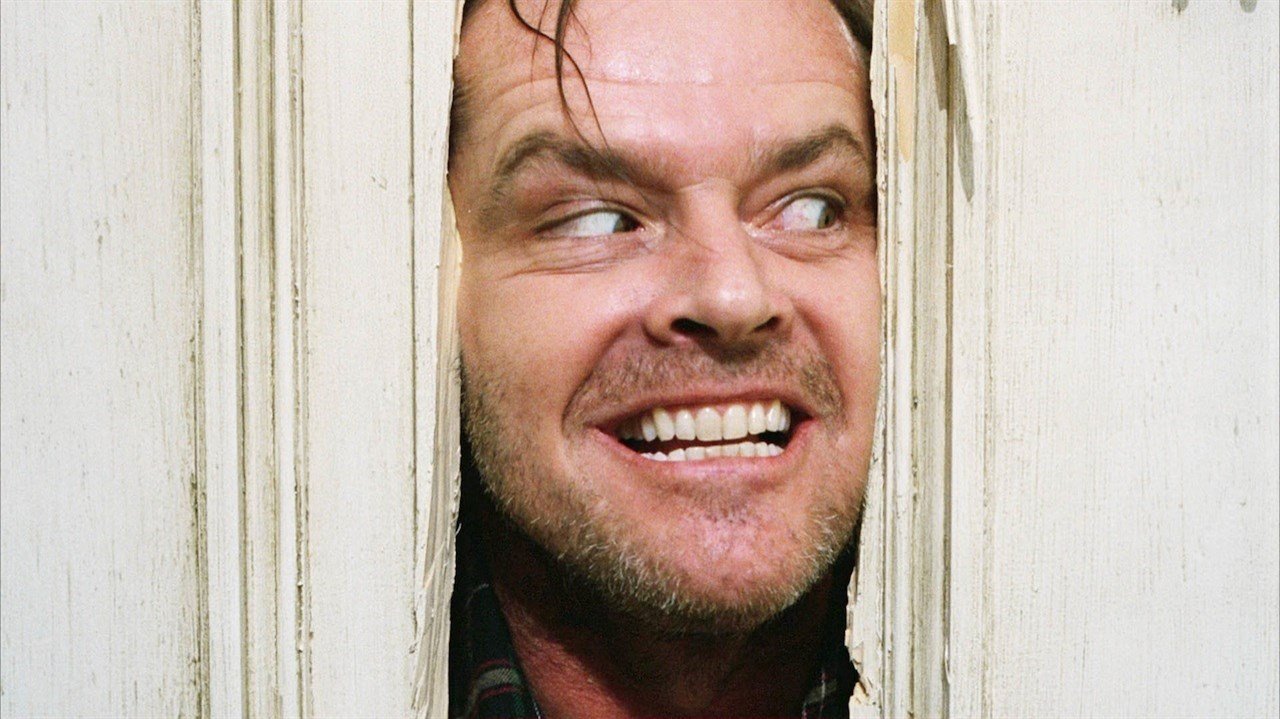 But have you heard of...downward trendlines? Decreasing daily active users?! 😱 This is what really haunts us mobile geeks at night.

Since we're feeling extra spooky this Halloween, we're sharing the terror with you. Here are the scariest app engagement trends of the past 90 days  (from least scary to pee-your-pants scary). You may want to grab a friend and night light before you get reading.

Waze, your cute little icon will not be spared in this Apptopia horror film. While the line is not frighteningly steep, your DAU is down 6% and downloads are down over 20%  😬. Time to turn it around before it's too late ☠️ 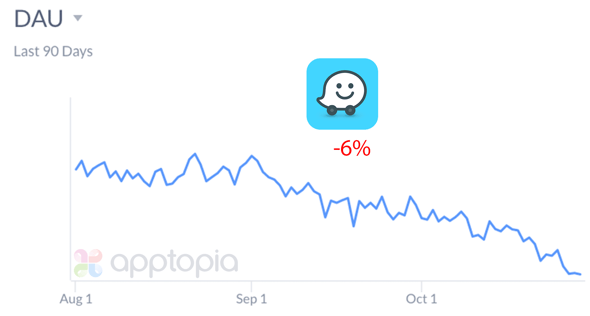 Netflix has been on a clear decline lately, missing its subscriber numbers for the second consecutive quarter. They may have survived this time around, but let's see how they fare after the launch of Disney+ 😈 dun dun DUUNNN 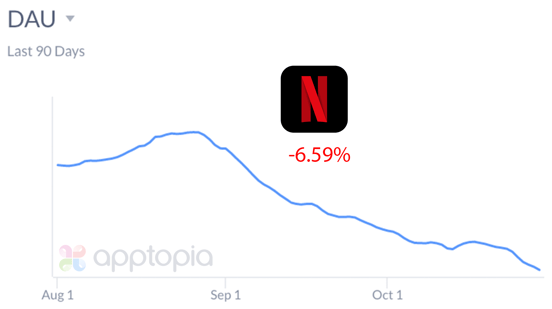 No one's hungry for Grubhub anymore 🙅🍽️.  On Tuesday, the company's shares plummeted to their lowest level in more than two years. We saw this train wreck coming and couldn't look away. RIP 😔 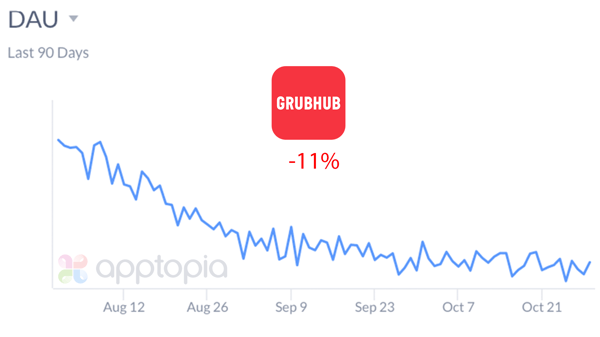 Pandora's the character in the horror movie that you didn't think was going to survive, yet there he is, holding on for dear life. But with a 12% decrease in DAU and a whopping 32% decrease in downloads, Spotify and Apple Music may finally be closing in on him.🔪 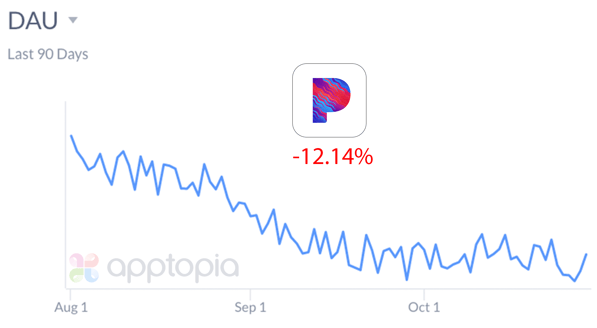 Sweatcoin must be SWEATIN' 💦 after this 90-day report 😅. There are a lot of things I would do for money, but exercise isn't one of them. Maybe I'm less alone than I thought. 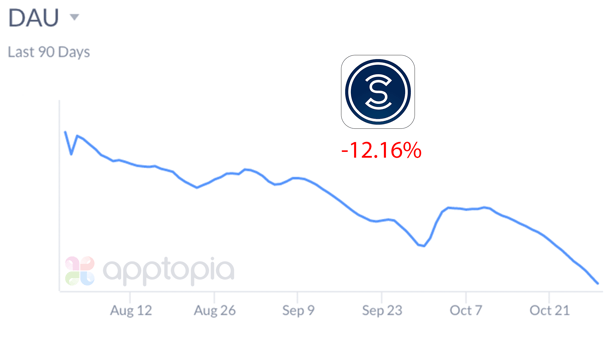 This one cuts deep. I change my Bitmoji's clothes weekly, but it's clear that other people have moved on 💔.  Apple's Animoji may be the final nail in the coffin for good 'ole Bit ⚰️ 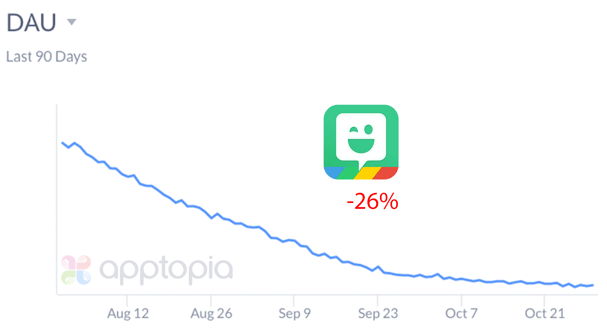 Another one BYTES the dust 👋. ByteDance, most known for their viral app TikTok, is struggling to keep their less successful app, TopBuzz, alive and well. Rumors have been circulating that they may gearing up to sell the news aggregator app...based on this performance, the rumors check out. 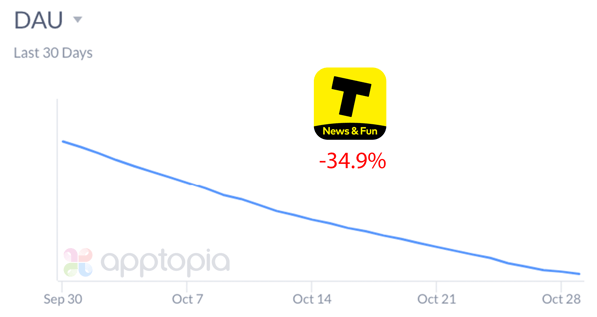 Better Me  has seen better days 😏.  It's candy and pumpkin spice season, so the majority of people are not interested in counting calories right now. Try again after New Year's, Better Me. 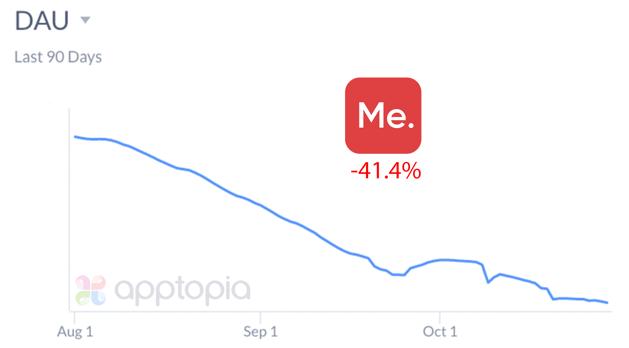