So, you and your team made a great game. The core loop is perfect, the tutorial is awesome, the on-boarding process is highly optimized, the metagame ensures longevity, and the overall production value is to be envied by studios much larger than yours. All of this makes a great game, but you still see games on the top grossing charts of a lower quality than yours, with millions of users. How can this be?

There can be multiple reasons, but the likely scenario is: You have to know how to advertise your game in order to reach a mass audience.

According to Apptopia, there are 46 iOS games that have stayed within the top 100 U.S. grossing game spots for the past 365 days. All but two are shown to be advertising according to Apptopia’s Advertising Intelligence. They are not necessarily top advertisers either, but some level of quality advertising is instrumental in making you money.

Knowing what types of creative ads you need requires a lot of work and expertise. How growth marketers use creative ads to drive bigger and better conversions has become a great endeavor of science meets art. Ads are getting smarter, shorter and quicker paced - accommodating the bite-sized way of online user behavior.

Before we dive deeper into Apptopia’s Advertising Intelligence platform, we need to look at some 2019 mobile gaming marketing facts:

Now, imagine how much you can bring to the table by viewing all of your competitors’ ads, helping to get everyone on your team on the same page when it comes to the expected look and feel of your ads. Apptopia’s Advertising Intelligence provides you with just that, and even ranks top advertisers (by share of impressions in each store/network/country/category). Of course, you can create alerts surrounding your competitors an advertising as well. 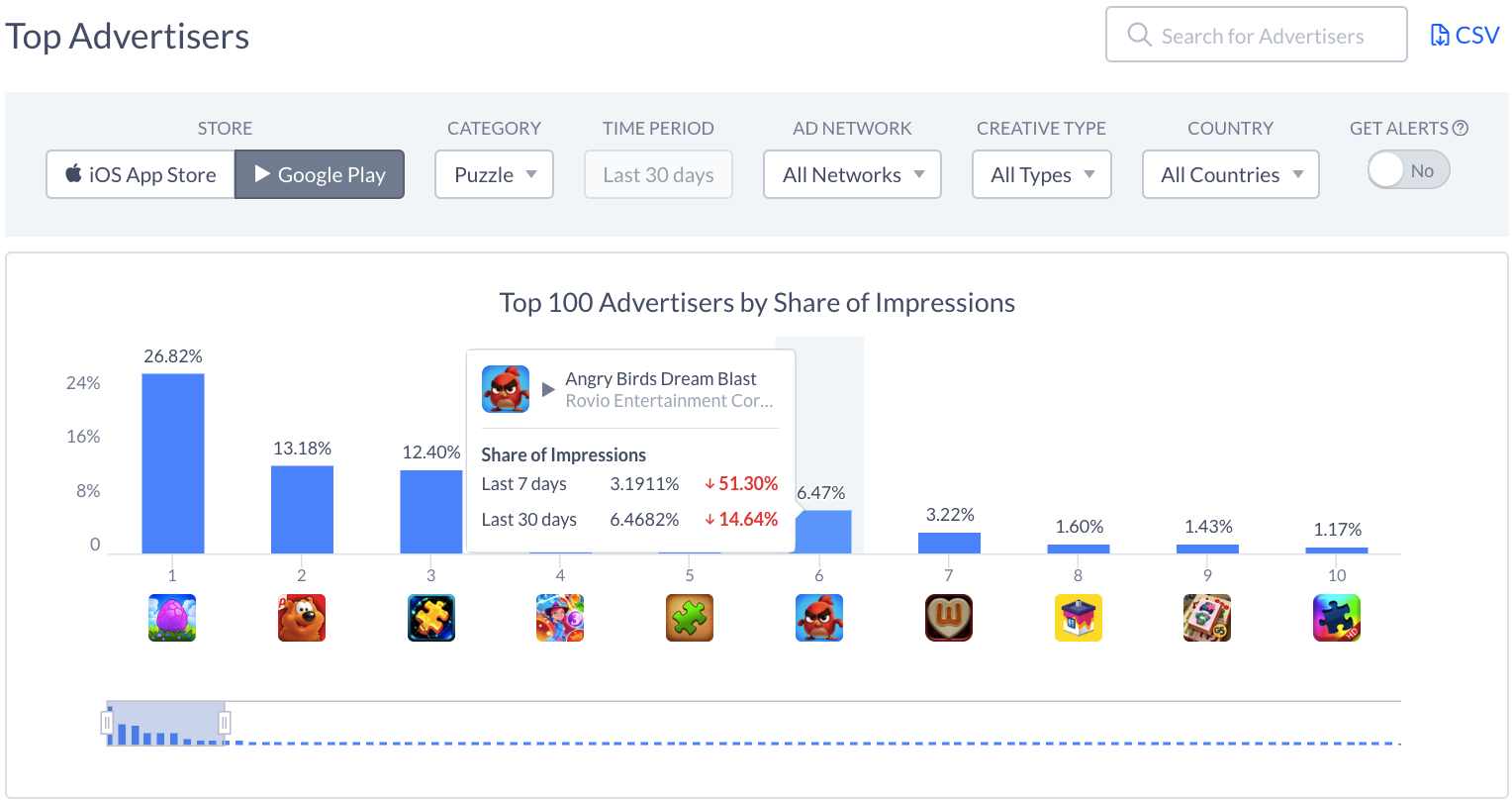 In addition to specific creatives, what else can you take note of from your market competitors? Study exactly where they advertise, with what volume and for how long each creative runs. You can also view which apps are publishing your competitors' advertisements. Apptopia even lets you identify their blend and if it is above/below the average for that category. Your creative team can study their best performing ads, effectively skipping some expensive steps of testing and iterations. Pro tip: best ads are usually the ones who’ve been running for longer than 9 weeks - these are the ad fatigue resistant ones!

Having worked with industry veterans and using the ad intelligence platform for a while, I have several long-term market tips for 2019:

Developers and publishers still mostly turn to Facebook and Google for user acquisition. Most marketers are allocating 30 to 60% of their monthly UA budgets to Facebook, because compared to other platforms Facebook is still miles ahead in efficiency. They have a clear ROAS view, which needs to be hit within the first week of an ad going live (to know if it will be profitable or not).

Biggest trend in 2019 = the KISS (keep it simple, stupid) videos. They’re ultra short (3 to 6 seconds), have just one message, one call to action, told quickly and visually - meaning users see it even if they just keep scrolling. This drives effectiveness. They are roughly divided into 4 categories:

Gameplay vs Cinematic vs Live Action - all of these are present, it really depends on the type of the game. Gameplay wrapped in an eye-catching environmental background seems to perform above average. Videos with more cinematic content are addressing different audiences than those presenting mostly gameplay. In some cases, even Live Action videos with actors make sense. If you don’t have the time nor the budget to do this, you can also leverage videos from your influencers and edit them into ads.

We often see publishers failing to explain what the game is about and users hate this. You must clearly communicate WHAT your game type is and WHY people should invest time to download it. Everything else is secondary.

Bear in mind that while Facebook and Google are excellent sources for UA, they are inherently different environments than mobile games. Rewarded ads in other games offer the best returns for discovery, where players clearly understand that they’re watching videos in exchange for a reward. Users are in a more relaxed and open state of mind when playing games than when engaging with social networks. This means that video ads in games have better engagement, higher completion rates and ultimately bring better quality users. There are no wasted impressions inside mobile games because publishers know that the audience is already interested in gaming.

Creatives on rewarded videos in games tend to be very straightforward, whereas Facebook and Google allow the developers to reach its target audience in unique ways by mixing creativity with data. The key to knowing which platforms to extend a marketing mix to is in understanding the audience. Apptopia can also help with this, diving deeper into audience demographics and user graphs, but that requires another full post.