App store rank explained: what is an app’s Apple & Google store ranking and what impacts it? 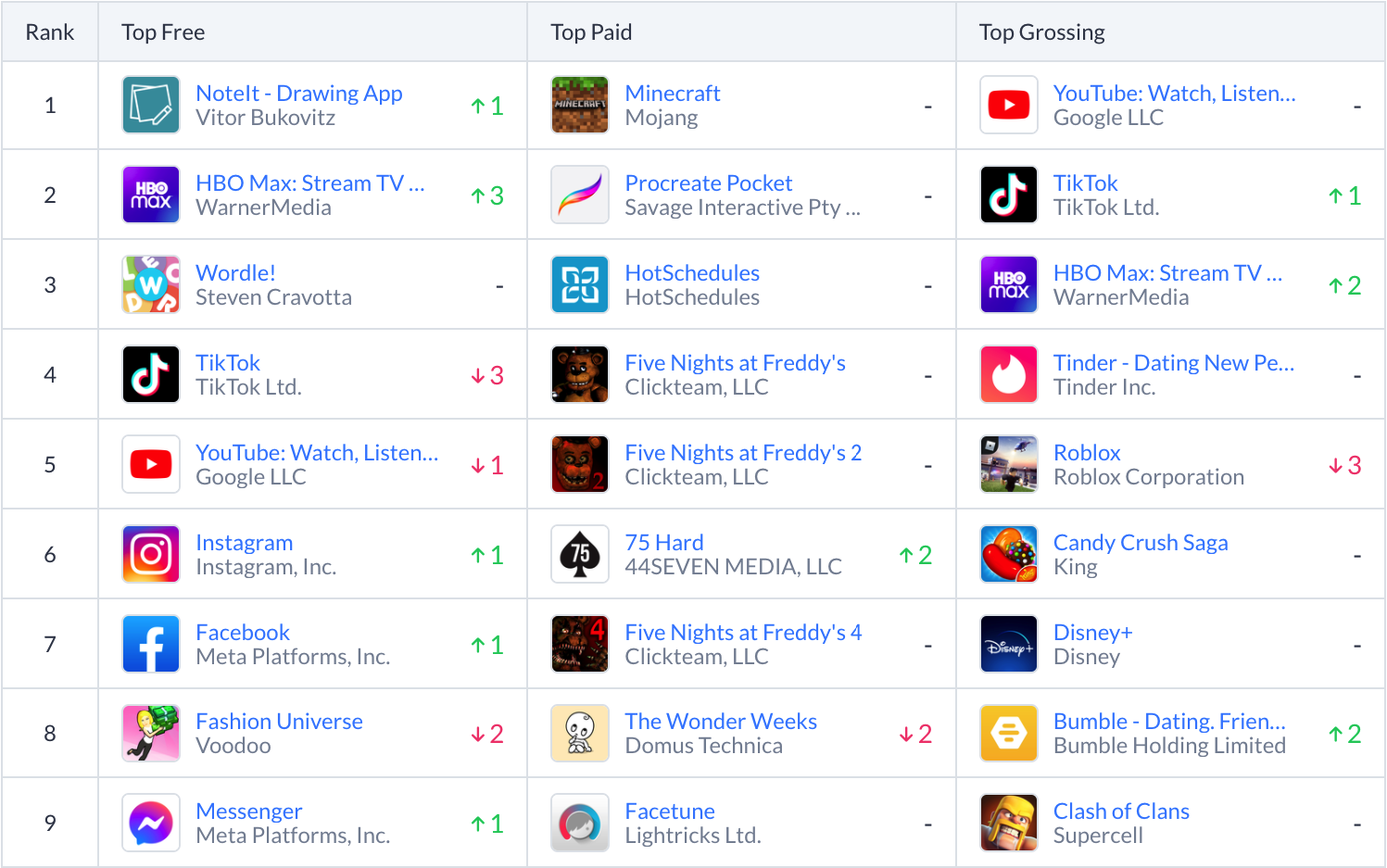 Everyone has access to the Apple App Store and Google Play Store Top Charts online, or on their mobile devices. But no one has access to Apple and Google’s ranking algorithms. This makes app rank, also known as store rank, both the most cited and most misunderstood mobile app metric out there today.

The biggest misconception today about rank is that it is determined by, or equates to, downloads. Under this assumption, the “Top Free Apps” are the most downloaded apps of the day, listed in descending order (highest number of downloads at the top). While this is inaccurate now, this was likely the case up until 2014, when major changes to the app store algorithms were made.

When downloads alone determined rank, it created a market inefficiency, where app publishers who spent a lot of money on user acquisition could guarantee, or pay their way, to the top of the charts. Under this model, Apple and Google realized that the apps they were surfacing to people were the biggest apps, not necessarily the best apps. And so they changed the algorithm, forcing publishers to think beyond paid user acquisition. Under the new ranking mechanics, a download is just one piece of the puzzle. It should be noted that rank is determined per country, and global app rank does not exist.

What impacts an app’s store ranking?

App Store Rank is influenced by several key performance metrics. At Apptopia, we believe we’ve successfully reverse-engineered the store ranking algorithms, uncovering what goes into them. This is what enables us to accurately estimate mobile app performance for every app in the stores.Today, we believe there are three main components to App Store Rank:

App store rating, user review volume, keyword relevancy and uninstalls contribute to the algorithm as well, albeit to a lesser extent. We believe that all of these components are evaluated on a 4-7 day moving average by Apple and Google. As such, providers in our industry ingest 4-7 days of historical data in order to make an estimate for one day.

To better understand the ranking algorithm, let’s look at Instagram. Instagram is a very large, very successful social networking app. Looking at its two-year historical data, the app has ranked in the top 20 in the US nearly every single day over the last 730 days.

However, Instagram has essentially saturated the US market, so it doesn’t actually receive that many net new downloads per day. In fact, if ranking were based on downloads alone, then the US would have to have doubled its population to account for Instagram’s consistently high rank. The US has not doubled its size in two years, leaving high app usage as the next obvious explanation for Instagram’s long-term reign at the top of the charts.

When App Store Rank is viewed over time, it provides clues about an app’s downloads, engagement and retention. Instagram, for example, clearly enjoys high user retention and engagement, which are the main components driving it to the top of the charts. Mobile intelligence providers and app publishers alike can leverage App Store Rank like this for greater market visibility.

People often wonder if Apple and Google have different app store ranking algorithms. Based on our analyses throughout the years, like this one from 2017, we’ve determined that Apple and Google’s algorithms are in fact slightly different. 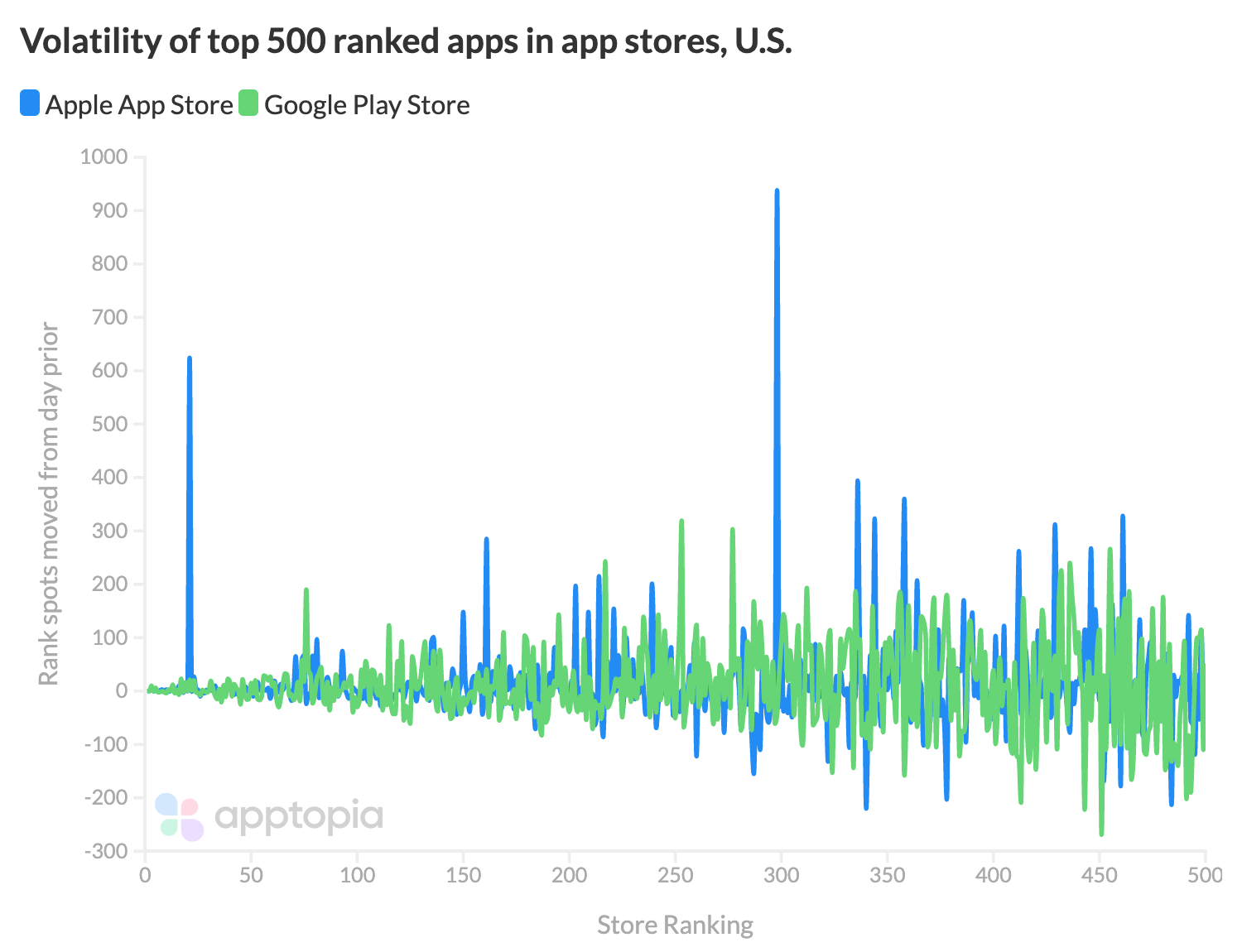 Above is a sample of a random day in August 2021, where we determined how many rank spots an app in each ranking position moved from the day prior in order to end up where it is now. For example, maybe the 5th ranked app that day was ranked 200 the day prior. In this example, we would see a reading of 195 on the Y axis over the #5 spot on the X axis. In General, we can see that the App Store has slightly more volatility than the Google Play store, especially in terms of letting apps shoot up in the rankings.

While most app publishers would assume that any slight rise in the number of app downloads should positively impact their overall app visibility, the Google Play Store seems to approach things differently. Instead of proportionally bumping up your Android app’s ranking based on the growth rate of its app installs and daily downloads, Google Play tends to pay more attention to the major milestones.

To get an understanding of the impact ratings have on store rank, we pulled a 60 day sample size in 2021 of the top 200 ranked apps in the United States for the iOS App Store and the Google Play Store, along with their respective star ratings.

In our 200 app sample on iOS, we found there to be an average of 192.5 apps rated 4 stars and above. This is the overwhelming majority (96%) and so we can conclude that it matters to be a highly rated app to be consistently ranked as a top 200 app overall. Doing the same thing for Google Play, the average was 138.2 and so it appears ratings have less of an impact on rank, but still, the majority (69%) of the top 200 are rated at 4 stars and above.

Additionally, for each day, we averaged the store rank numbers of apps rated 4 stars or above, apps rated anywhere from 3.0 - 3.9 stars, and apps rated below 3 stars. This generated some interesting data. On iOS, for each day, the average ranking of apps rated 4+ stars was 101.5. This was very consistent. The daily average for apps rated in the threes and those rated below fluctuated wildly, but both were always above 101.5.  Because there are so many apps that are ranked 4+, it ends up making the better rated apps look worse. The stores (especially Apple's) make way for lower rated apps to shoot to the top off of download velocity. When an app experiences a surge in downloads, and shoots to the top, we usually see an uptick in negative reviews because more users = more bugs found for apps that have been unable to be heavily tested.

Paid vs. Grossing: How these Top Charts differ

The Apple App Store and Google Play Store separately rank free apps and paid apps. Paid apps are those that require an app store purchase in order to download the app. Free apps can have in-app purchase options, but are free to download.

As there is a clear distinction between the two types of apps, it is impossible for an app to have both a free and paid rank. Paid apps are ranked in the same manner free apps are. This means that downloads, and several other metrics, influence a paid app’s rank. A paid app’s rank is not determined by the value of, or revenue gained from, its downloads.

In addition to the Top Charts for free apps, paid apps, free games and paid games, there is a Top Grossing list. Apple no longer publicly shares this list, but the Google Play Store does. Grossing rank is based on the IAP (in-app purchase) revenue the app is earning. Advertising revenue is not factored into Grossing Rank, as this revenue does not get processed through the app stores.

Grossing rank is different from Free and Paid rank, as it is not determined by downloads and/or engagement metrics. Instead, it is determined by the total value of an app. An app that sells 1,000 in-app purchases at $100 a piece ($100,000 in revenue) will have a higher grossing rank than an app which sells 50,000 in-app purchases at $1 ($50,000 in revenue).