Many assumed that with Apple's App Tracking Transparency going into effect, we would see a significant decline in iOS game performance because ad targeting would not be as effective or as efficient. According to the latest estimates from Apptopia, this is not the case. 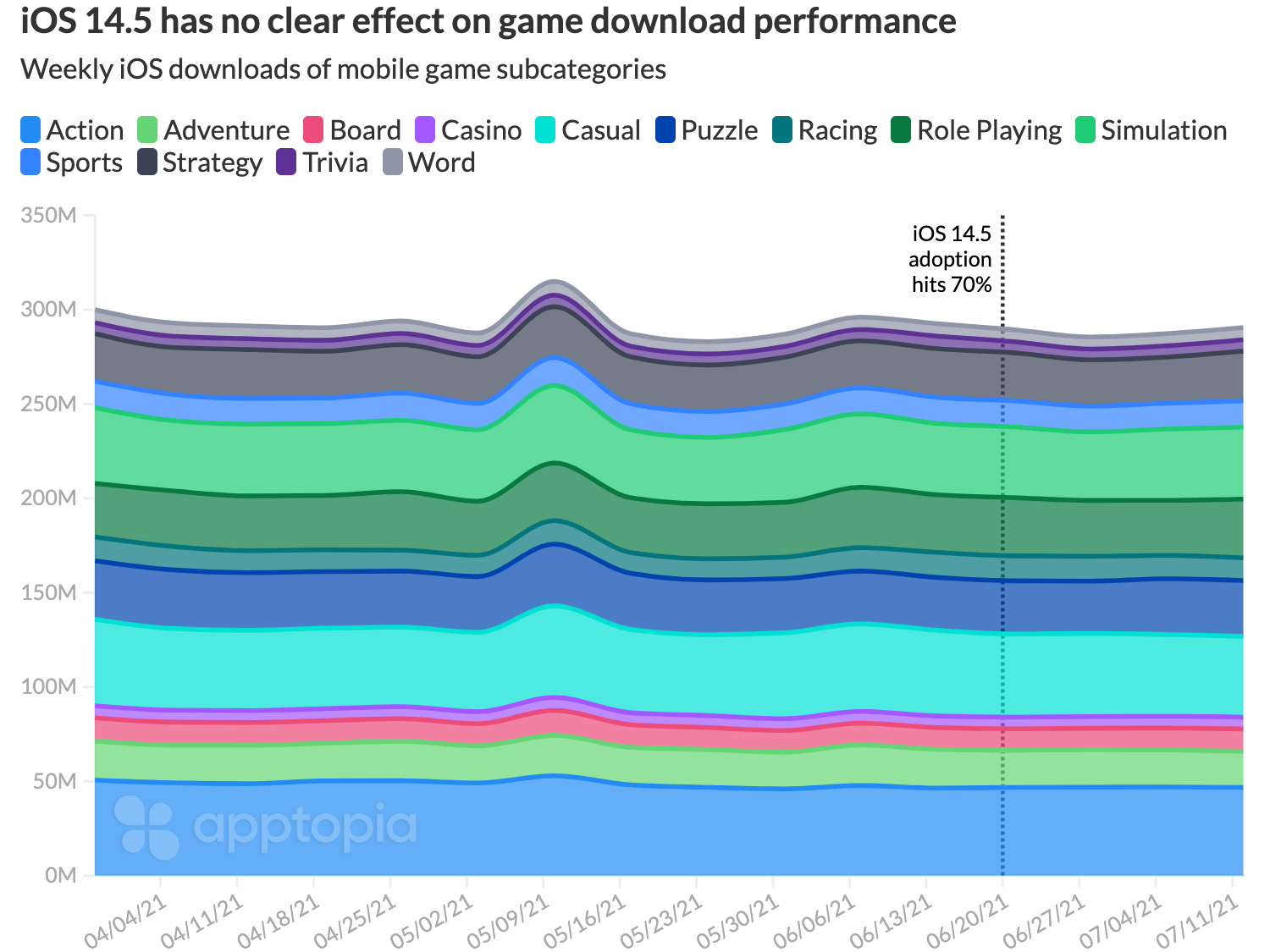 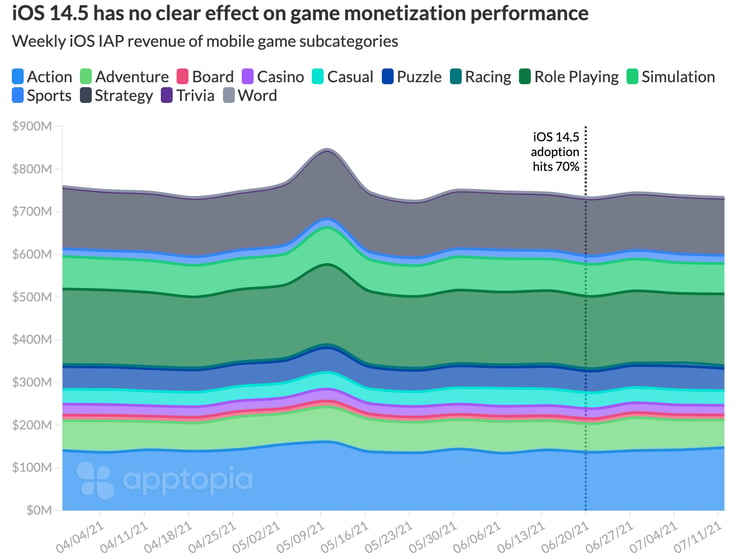 According to Branch, iOS 14.5 adoption hit 70% on June 20th and 75% on June 27th. As you can see in the images above, mobile game downloads and in-app purchase revenue of the largest gaming subcategories remain unchanged from their trend lines.

Just like when the clocks changed from 1999 to 2000, it appears the apocalypse did not happen. So why not? I can't say for sure but I can take a few guesses:

-App publishers could be fingerprinting even though Apple doesn't want them to, but hasn't slapped anybody's hand just yet.

-Publishers could simply be spending more on user acquisition to make up for lost efficiency, though this seems unlikely this early in the transition. I imagine publishers will want to see how things progress before spending more money on something that might not work.

-Some publishers may be allocating a larger percentage of their advertising budget to native ads of large networks like Facebook, where they can still benefit from an efficient targeting system.

-Many large publishers have better targeting capabilities than their smaller counterparts because of the IDFV, or vendor identifier. IDFVs enable publishers to run cross-promotional iOS campaigns which include ‘limit ad tracking’ without relying on fingerprinting. In June 2021, the 25 largest game publishers by downloads represented 24.37% of all mobile game downloads globally, further negating any negative trends we may have expected to see.

-And of course, there's the potential that more people are allowing for tracking than the industry is led to believe. 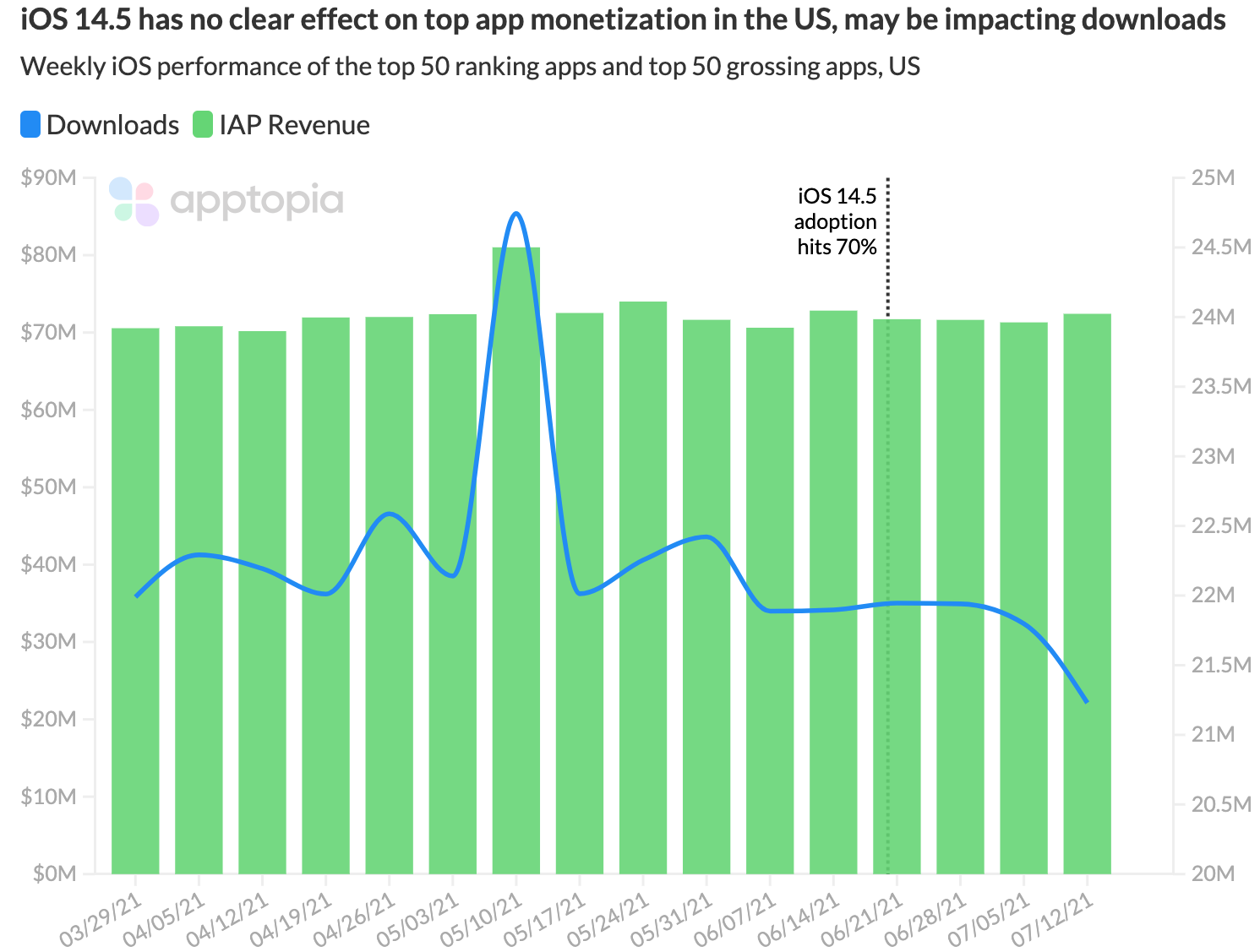 Getting out of games for a moment, and looking at non-games, we see a similar trend. The data in the chart above is for the United States. In-app purchase revenue of the top 50 grossing apps remains on its trend line as adoption of iOS 14.5 increases. We do see a very slight dip in downloads for the top 50 ranking apps.

We'll need to continue to monitor to see if the downtrend for downloads continues. Maybe this is water finding its new level but it could be a coincidence. If the downtrend is real, IAP revenue will likely follow as new subscription revenue is harder to come by when there are less new users.

Take the data out for a spin