It’s 4:20 somewhere, right? Marijuana has been legalized recreationally in nine states, including Apptopia’s home state of Massachusetts. An additional 14 states have decriminalized the plant and 29 states have medical marijuana available to those who qualify. Most recreational legalizations have happened within the past five years and more states will follow. This has created a naturally growing market, which includes the mobile app economy. 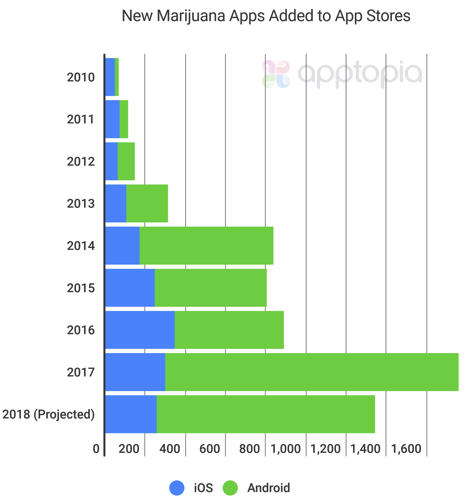 From 2010 to 2017, net new marijuana apps joining the app stores has increased 2,564%. As you can see, 2017 was a big year (specifically on Android) for new apps. These numbers are impressive but still trail net new entrants for self-care apps. Based on new entrants through March, we project well over 1,000 new apps to join the stores this year but we anticipate it to be a few hundred less than last year.

When I first came up with the idea for this post, I set out to talk about the growth of the top 10 games and apps, but found that even though there are loads of new games and apps joining the stores every year, most of them are either not super successful or not growing at an impressive rate. There are only two marijuana apps I would venture to call “big,” and both of them make are also the fastest growing. I'm talking about Leafly and Weedmaps. Other notable marijuana apps you have probably heard of include Duby (social network), High There! (social network), Eaze (delivery), and MassRoots (medical marijuana aid).

If we measure by MAU, Weedmaps is the largest marijuana app and Leafly is the fastest growing marijuana app. Weedmaps is the oldest marijuana directory, with listings throughout the US, Canada and Europe. It helps users locate doctors, deliveries, storefronts and deals near them. Leafly is a crowdsourced marijuana strain database with detailed information on each strain. It also directs people to where they can obtain marijuana products and enables business owners to create online storefronts.

Likely driven by the celebrity of its namesake, Wiz Khalifa’s Weed Farm is the #1 marijuana mobile game. It is easily the top performing game that publisher Metamoki has live on the app stores, accounting for 95% of its IAP revenue. Players of Weed Farm aim to grow and sell marijuana to increase their profit.

The other large marijuana mobile game we identified is Hempire, created by LBC Studios, and we believe it is the only mobile game the company has live right now. Hempire is similar to Weed Farm but goes deeper in many ways; the marijuana products the player is in control of and can create, the growth of the player's business, and the storyline.

Both apps launched in April of last year and even though Wiz Khalifa’s Weed Farm has about 52% more monthly active users, Hempire has generated 50% more IAP revenue since launch. After looking at 14 day user retention, Hempire averages a few percentage points higher across the past year which leads me to believe its more involved storyline is keeping players playing longer and spending more cash than players of Weed Farm.

What does the future hold?

As more states, or maybe even the federal government, begin to legalize marijuana, we will continue to see more apps pop up. It’s highly likely they will be localized due to differences in state laws. Because of that, a delivery company like Eaze cannot operate as simply as a company like Grubhub. Games will outperform in downloads and active users because they can cross state and country lines without repercussion. We'll do another post next year as a follow up to this unless something big happens within the next 365 days.