Mobile games making use of ASMR are on the rise! The number of games ranking across iOS and Google Play with the word “ASMR” in title and/or description have been rising for 13 straight quarters. Q2 2021 ended with 405 games, an increase of 72.3% year-over-year.

For the uninitiated, ASMR stands for autonomous sensory meridian response. It’s when your body responds to audio stimuli by giving you a tingling sensation and/or pleasant chills. Many people find this sensation to be calming and relaxing. ASMR can be used to relieve stress and anxiety.

Why is the number of games being marketed with ASMR increasing?

Looking at the top 10 ASMR themed games over the past ten quarters, we found that every game was a hyper-casual game. The hyper-casual genre is defined by its simplicity. These are lightweight , easy to play games that can be very addictive. They come without a large amount of investment from the gamer and are passively played during our commutes or while waiting in a doctor's office. They take little mental effort and have simple gameplay mechanics.

This is a perfect fit for an ASMR themed game. Many people play games to relax and to take their mind off of other things. ASMR serves many of the same purposes.

More than anything though, because hyper-casual games are easy to create and launch, they tend to latch onto fads and use popular searches and current interests to drive downloads. I remember when fidget spinners were everywhere in mid-2017 and the top of the app store charts followed, populating with many fidget spinner games. The lifecycle of many hyper-casual games is short-lived. People get bored and move onto the next simple but fun game, just like with fads. 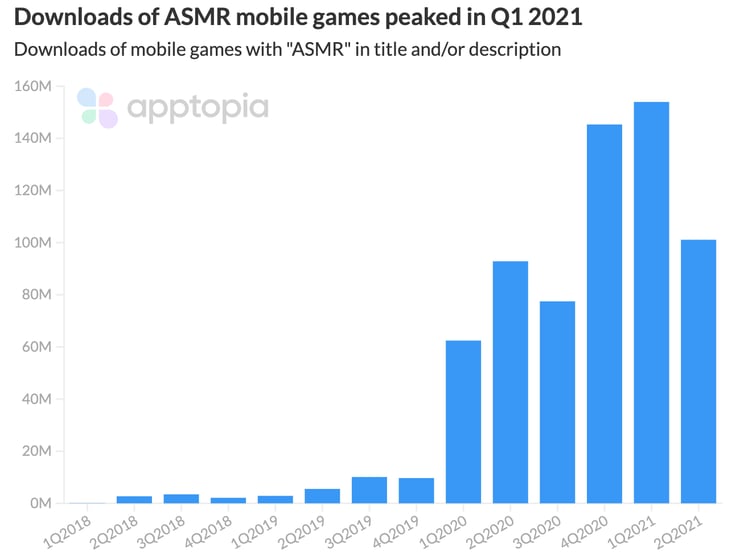 Downloads of these games hit their peak in Q1 2021 with a whopping 154 million.

ASMR gained its popularity on YouTube. As you can see above, shortly after searches for "ASMR" on YouTube rose in 2019, game publishers noticed and took action, building similar components into their games, or at the very least, trying to have the search term's success rub off on them.

Publishers and developers take notice when competitive apps do well. There is no shame in taking ideas from one successful hyper-casual game and tweaking them to create your own. On a recent episode of Somewhat Mobile, Sunday's Christopher Sachsenhausen likened it to the remix culture in Hip-hop: When ASMR was starting to make its way into mobile gaming in 2018, it was mostly around the slime. Slime was being used by YouTube influencers in toy reviews and then it moved onto TikTok where people made videos showing how oddly satisfying watching it could be.

Lately, Crazy Labs and Say Games are the two most successful game publishers behind ASMR themed games today if we're judging by downloads. They focus on creating satisfying and mindless games and put "ASMR" either in their titles or subtitles. ASMR Slicing from Crazy Labs is a good example. This is its App Store description:

This is the most satisfying kinetic sand cutting game. It's not just kinetic sand, there are multiple other awesome objects too! You've seen it in the videos and now you get to cut it yourself!

Cut different shapes of kinetic sand and feel the amazing satisfaction. Many different types of objects available to cut! Feel the immense satisfaction!

Just last quarter, Sushi Roll 3D again led the pack but with a stellar 46 million downloads. ASMR is more of a trend than a fad as it's been around for awhile and there are plenty of YouTubers consistently generating revenue from their ASMR work. We did see downloads dip last quarter (see chart above) but I do not believe they will nosedive like we saw with the fidget spinner games.

Take Apptopia for a spin and look into five games of your choosing to see what trends you might spot, just click the blue button below.

Finding and tracking trends is fun!