Beauty Retail and Direct-to-Consumer (D2C) Apparel apps are driving more daily active users (DAU) in the last 30 days than during the peak of 2021 holiday shopping. Daily users engaging with D2C Apparel apps have increased 5% from December 2021, and 2% for Beauty Retail apps.

Historically for these retail categories, they reach a new all-time-high engagement rate each December. In the last three years, the record engagement would not be surpassed until Q4. This year, D2C Apparel apps beat its December engagement in May. Albeit by less than 1%, but the market has consecutively increased engagement since, to the point that August engagement is 10% above December 2021.  Beauty Retail apps just outperformed their market’s holiday record this month, increasing engagement by 2% in August. 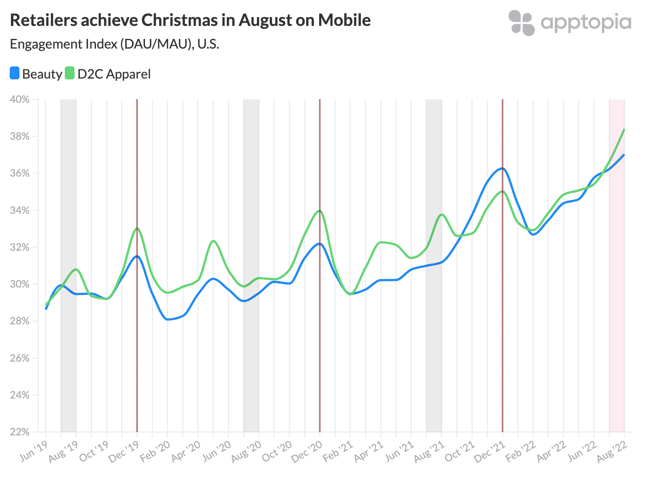 An increasing rate of daily active usage is fascinating to observe among these Retail apps, which represent discretionary spend. The apps from each market with the highest engagement come close to 50%, which means users are opening the app almost every other day. While I have not seen holiday shopping ads from these retailers, I have seen loyalty programs and revamped rewards galore as consumers gravitate toward apps that offer discounts. The Bath & Body Works app in the Beauty Retail app market announced a loyalty program yesterday, but in our performance intel, we can see it soft-launched in July after a slow roll out and testing since March. The official launch comes just a week after the company laid off 130 employees, mostly in leadership roles.  From the looks of their mobile performance data, the restructure is in favor of mobile investment. In the last 90 days, Bath & Body Works has gained 1.2 million new installs, and 20% were in the last week.

Notably, Sephora's strategy to increasing engagement this year is not all about free stuff. In fact, it's about paying Sephora more often. In April, Sephora released a subscription hub for a feature called "Auto-replenish". Users can opt into Auto-Replenish to refill the beauty products used in their routine. In July, it enabled buy now, pay later for Auto-replenish subscriptions via Klarna, making it even easier to opt in to subscription. Sephora leads the Beauty Retail apps market in engagement, and when you look back, it seems to have always prioritized a product-led growth strategy to drive engagement. 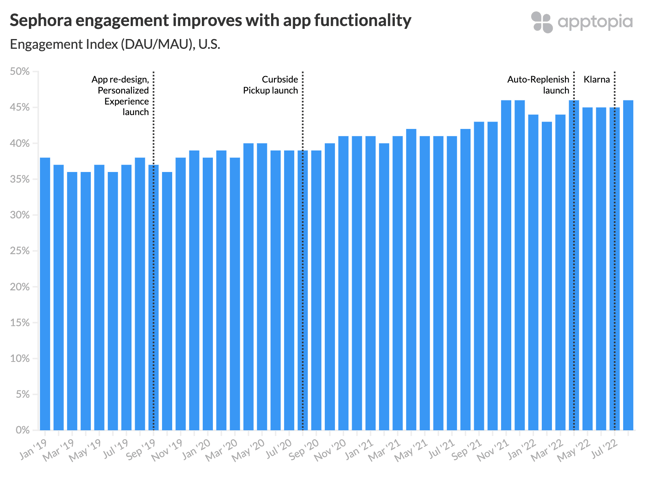 In the D2C Apparel market in June, Gap and Hollister, tied for highest engagement, opted for the loyalty and rewards program update strategy. Both made updates to credit card and cash rewards, and both have increased engagement by 2% since then.

The fact that both worked on cash and credit rewards stands out to me. You can see the program updates in the app updates images below. Earning brand currency has been a popular tactic for increasing engagement over the past year because it makes spending time in the app worth something. It will be interesting to observe the different types of loyalty and rewards programs launched among retailers this year and see which provide long-term value - at the least into the real holiday shopping season.