There's more streaming video options for entertainment than ever before but which companies are seeing success and why? What's working, not working, and what could be better?

In Apptopia's latest report, Benchmarking the Streaming Video Entertainment Landscape,  you can see how your app stacks up against the competition and what you can learn from both your competitors and their customers. We'll also show you the fastest growing apps you need to keep an eye on.

In addition to a global look at the top streaming players, we dive deeper into subcategories for the industry in the U.S. market, looking at SVOD, AVOD, Sports, TV Network and Live TV streaming apps.

Netflix still leads the industry as it's available in the largest number of markets. Disney+ and HBO Max continues to do well with strong adoption from the major market of the United States, and continued international launches. Two of India's largest streaming offerings in Hotstar (owned by Disney) and ZEE5 made the cut, as well as two offerings out of China in WeTV (owned by Tencent) and iQIYI (owned by Baidu).

Besides these big name players, what stands out to me most is the performance of Pluto TV (owned by Viacom) and Tubi (owned by Fox). Most well known apps are based on subscription revenue. These are the only two offerings on this top list to be supported solely by advertising revenue.

Year-to-date, 2021 is the strongest year for US subscription streaming app downloads with 216 million across the top 25 apps, a 29% increase year-over-year. 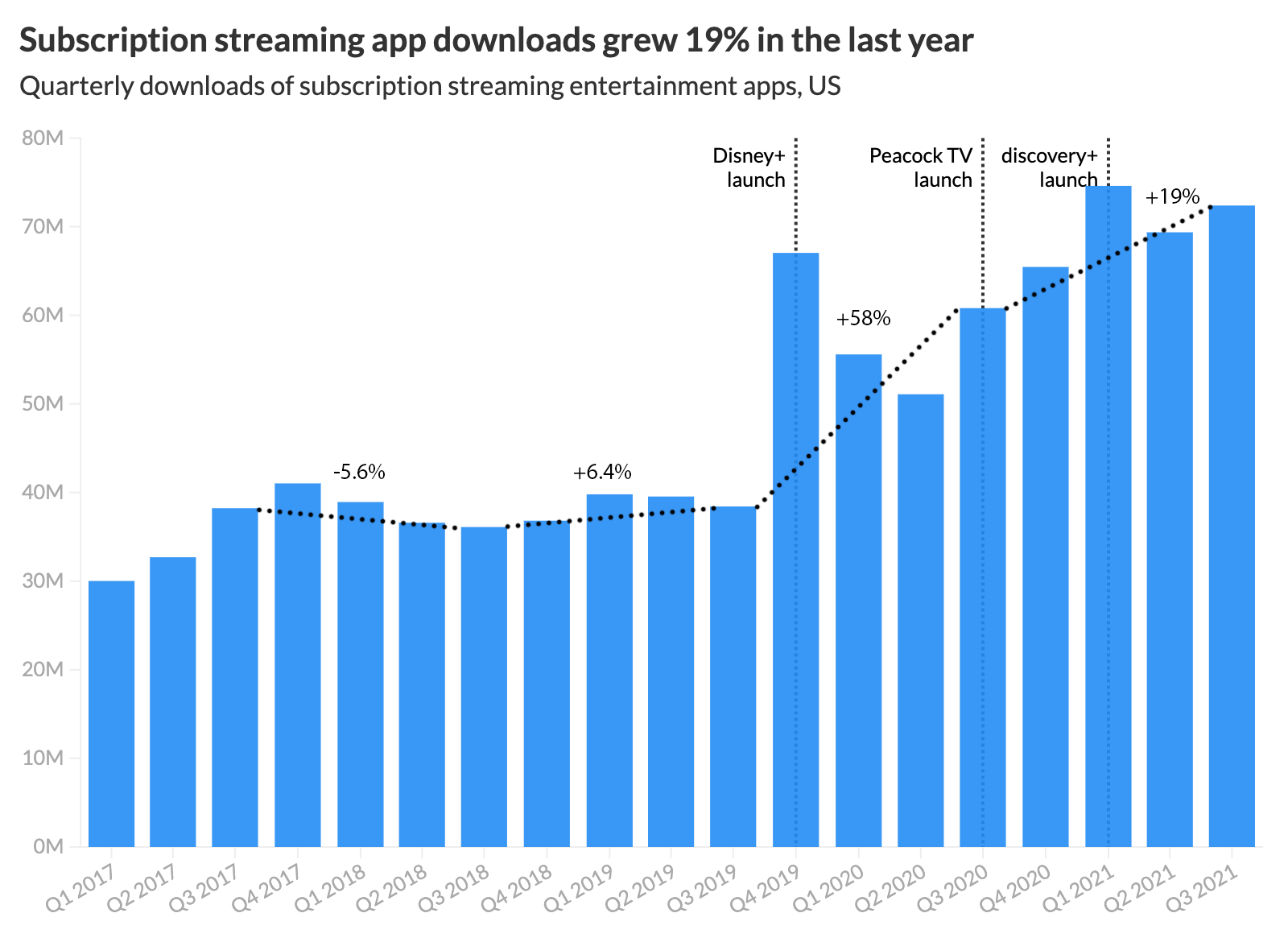 Even with all these new players and heavy investment from large media corporations, Netflix is still the market leader in viewers' eyes. So much so that "Netflix" is a top 10 keyword used in the user reviews of all of Netflix's top competitors. The reviews mentioning “Netflix” range widely in their sentiment for the respective apps, but the point is that every streaming service is constantly being compared to Netflix by its customers.

This past quarter, the top 25 TV Network apps (TLC GO, Watch TBS, etc.) saw their first year-over-year growth since 2016, but they've been on the decline when it comes to attracting new users, as the number of 'cord-cutters' continues to grow. Additionally, several traditional cable networks have launched subscription streaming apps, leaving their respective TV Network apps to see their usage fall significantly as viewers are directed toward the subscription option.