Supercell’s newest game, Braw Stars, launched worldwide on December 12th. In its first week of global availability, the game grossed $5.1 million through in-app purchases and was downloaded 9.5 million times. Supercell tested Brawl Stars in soft launch markets for about 1.5 years before global release, where it generated about $6 million in revenue.

As with many new games, downloads are already starting to recede, hitting their highest peak on day five with two million. However, the game's revenue is continuing to climb day over day. The last game Supercell launched was Clash Royale in March 2016. Granted it’s a much different game, but in comparison of performance metrics, it blows Brawl Stars out of the water.

In Clash Royale’s first week of global release, it generated $22 million in revenue and garnered 13 million downloads. Also unlike Brawl Stars, its downloads were still consistently rising. By most standards, Brawl Stars has had a very successful launch. It is more the case that Clash Royale had an absolutely superb launch. 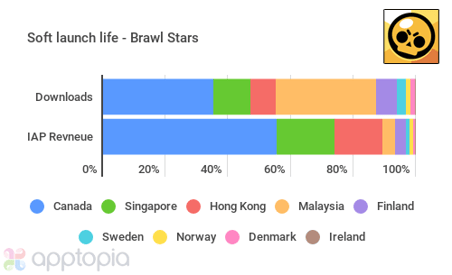 Brawl Stars has already ranked #1 overall in 53 countries in the App Store and 47 on Google Play. The game has only reached #1 overall grossing position in three countries on both stores. Should we see any exciting developments in the metrics for Brawl Stars, we'll be sure to share them.