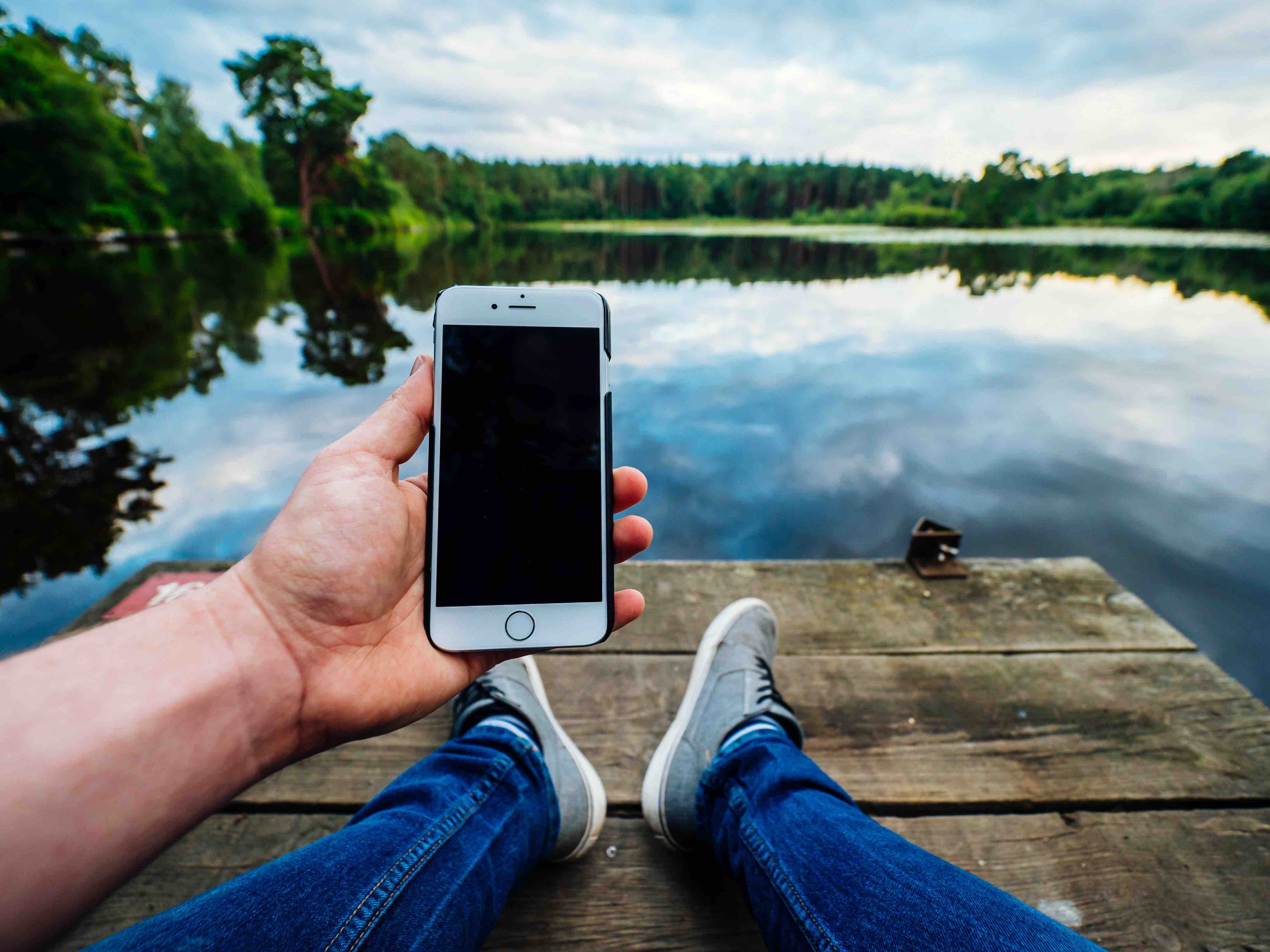 Mental wellness apps, like Calm and Headspace, have increased in popularity over the years as more people embrace meditation and other self-care practices. Now, there's a lot of speculation that these apps are surging due to the pandemic. However, that's not quite the case. While engagement is high right now among these apps, it's not off-trend from what we were seeing prior to the outbreak.

App sessions of the top 15 mental wellness apps are up approximately 66% YoY and monthly active users (MAU) are up 11% YoY (May to May). That 66% leap, though, appears to be due to an abnormally poor performing May 2019. As you can see below, sessions of these apps have, for the most part, been steadily increasing since May 2017. You can also see that there's no dramatic spike in sessions during the months characterized as the quarantine period. 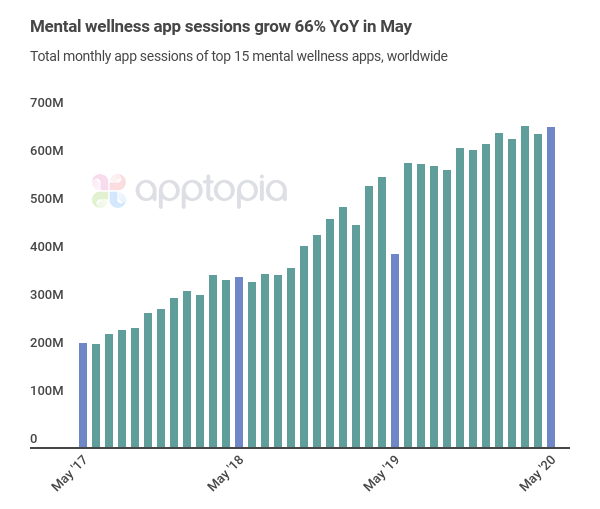 These apps are not attracting large numbers of new users either. Downloads or "net new installs" of the top 15 mental wellness apps actually declined 4% YoY, after multiple years of steady upward growth. This means it's loyal users, not new users who are driving the strong engagement lately. 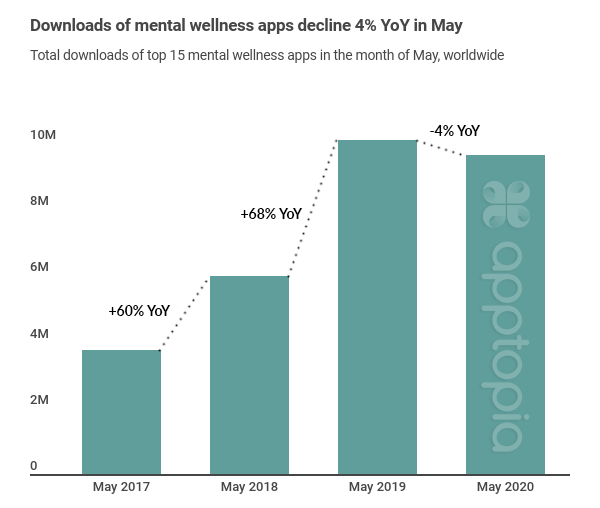 Reflective of the market as a whole, most of the apps we analyzed were largely unaffected by the pandemic, continuing to grow or decline according to their previous trend line. For instance, Calm, the largest app of the group, may look like it's surging in recent months: new installs of the app were 18% higher in May than January, and app sessions were 23% higher. And on June 14, Calm achieved its highest DAU in its lifetime with approximately 4.6 million. Still, this record high engagement does not deviate from the app's trend line, as pictured below. 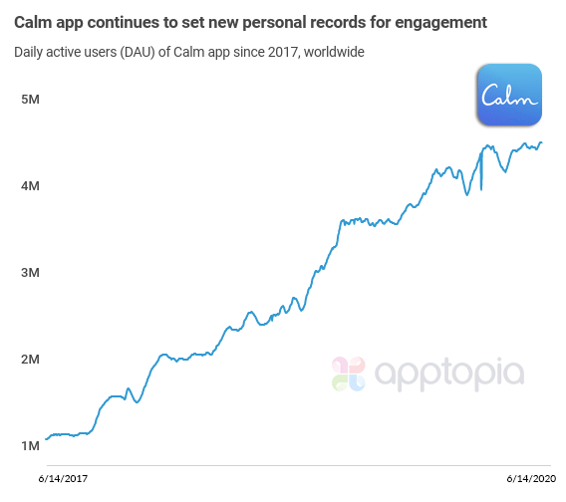 Recognizing this, we can still appreciate the large amount of time we spent in these apps during quarantine. The mental wellness apps that saw the most usage in the United States in the months of March, April and May were Calm, Headspace, Noom, Reflectly, and Relax Melodies. Calm recorded 120% (almost 200 million) more apps sessions in the U.S. than Headspace. Worldwide, in these same months, the most used were Calm, Headspace, Meditopia, Reflectly and Noom, in that order.

It's also worth mentioning that our findings were similar for therapy-platform apps like Talkspace and Betterhelp. Sure, these apps are growing, but the past few months have not yielded a steady, upward increase, like some would suggest. Instead, their growth since January looks like this: 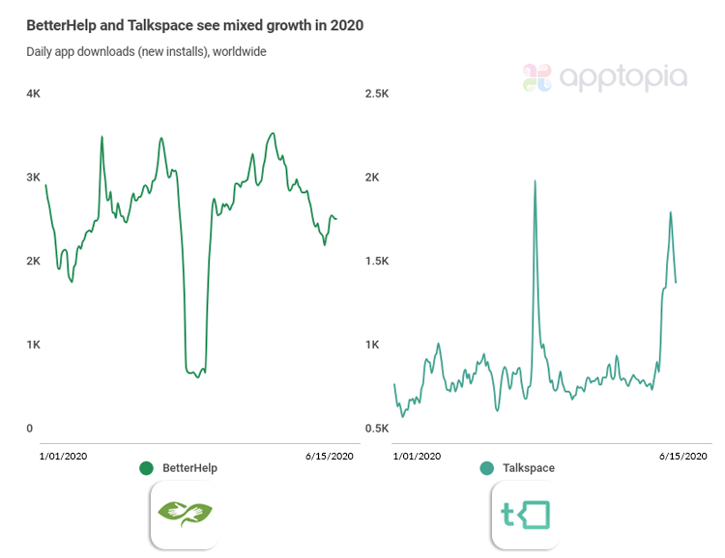 BetterHelp experienced an odd drop off in installs in March, which could be explained by technical issues -- regardless of the reason, BetterHelp's daily installs sit below 4K anyway. Talkspace saw spikes in new installs on March 24 and June 12, but the installs were also in the low thousands.

Key takeaways: while mental wellness apps are growing in popularity, their success is not directly tied to the pandemic. This, of course, is not a bad thing, as the high engagement we're seeing is a signal that these apps have loyal users. I expect this market to continue to grow and expand as more people embrace telehealth in all of its forms.