Class Has Begun, Please Take Your Phones Out

I remember in high school, teachers would tell us all to put our phones away and silence them. Phones were a distraction from learning all that knowledge Mrs. O’Connell was dropping on us about the Industrial Revolution and whatnot. Those were the days of flip phones, slider phones and some Blackberrys.

Now we’re in a different age. As my boss likes to point out, the appification of everything is happening and education is no different. As we roll into the 2017-18 school year, teachers are sending students and their parents information about how to use smartphone apps to engage in school work and stay on top of the curriculum. Four of the most popular of these educational apps are Quizlet, ClassDojo, Google Classroom and Remind. With the exception of Remind, each of these apps is meant to be actually used in the classroom. So in a twist, teachers are now telling their students to take their phones out and keep them out. Weird.

Leading up to this school year, Remind has hit the highest rank in either store (#1 overall in the App Store five times in August),  but Quizlet reigned supreme last school year with an average of 1.3 million monthly active users. User acquisition is a little different with these apps due to their use cases. Your job is to get a teacher or entire school or school system to buy in and they in turn get students and parents to download and use.

As of Sunday, August 27th, the top 10 Education ranking in the App Store is as follows: 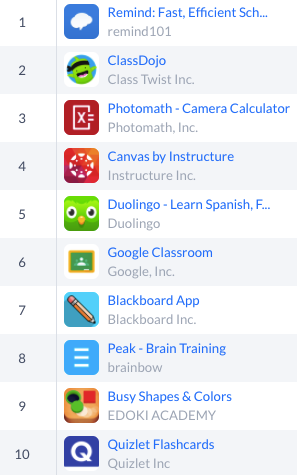 The above information is limited in terms of Apptopia's full capacity of data on these apps and their respective category. Please do not hesitate to reach out to me or anyone on my team to learn more about the apps mentioned above and their competitors in the Education categories. Feel free to schedule a demo as well.