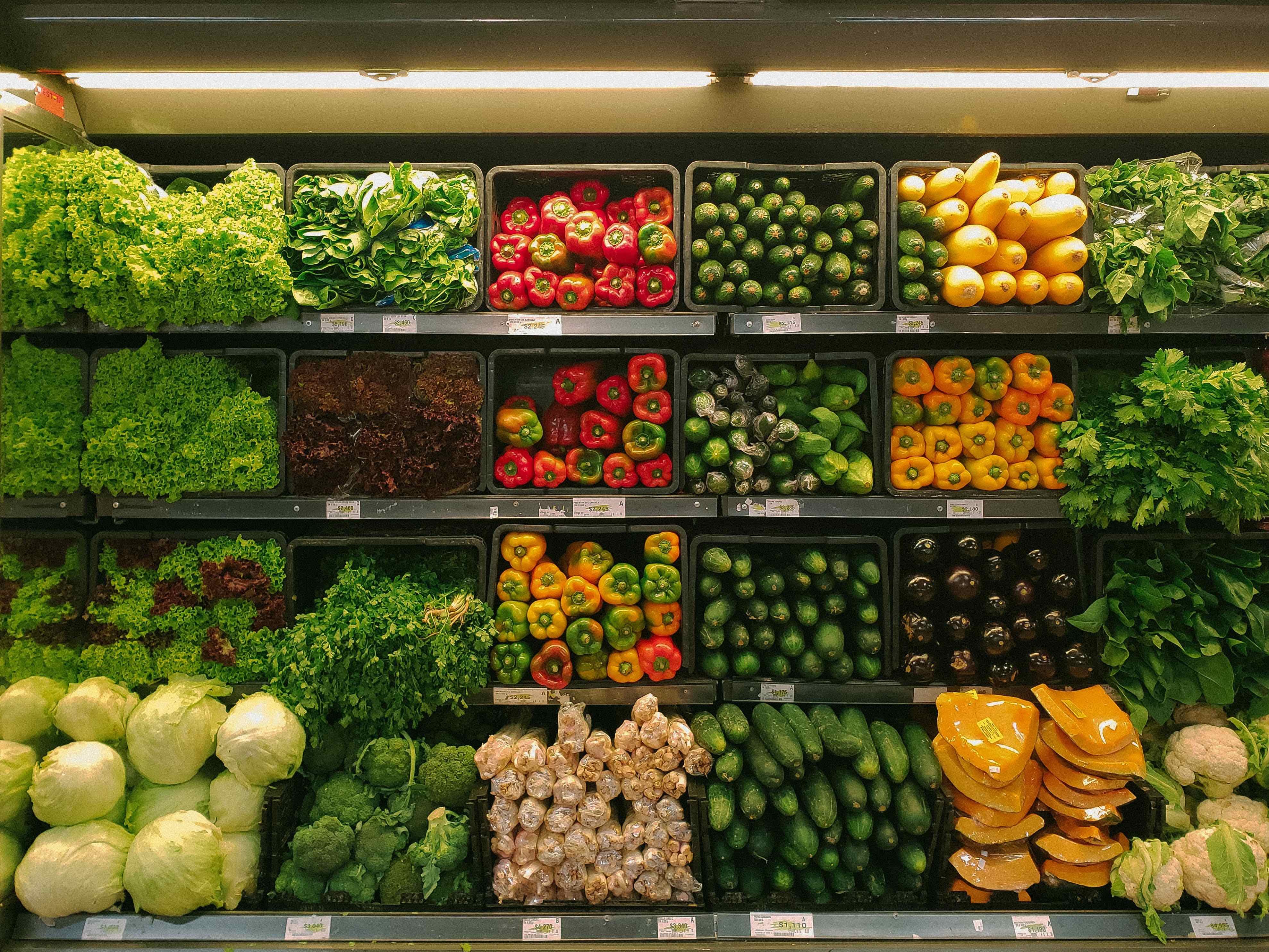 As COVID-19 spreads, people across the globe are trying to limit their exposure to other humans. This means finding alternative ways to buy food and household items. We took a look at regional and global data for grocery apps, food delivery apps and restaurant-chain apps. Here's what we've discovered so far.

United States - Folks are stocking up as we are WFH until further notice. BJ's app downloads/installs are up about 55% since Feb. 1 and Costco's are up 52%. Not included in the graph below is Target - Target's grown installs 72%, with its greatest uptick occurring after March 8. I have not yet noticed abnormal trending for grocery-delivery apps in the U.S. 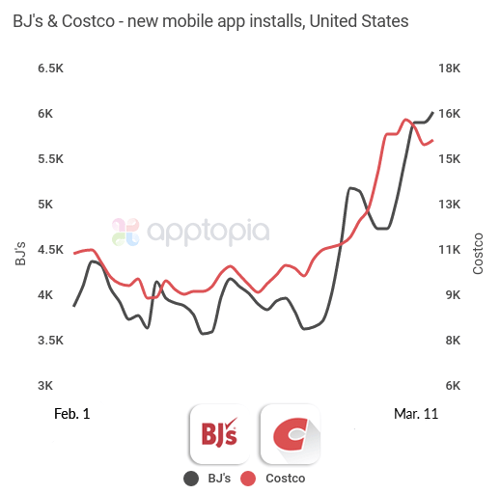 Italy - Italy is under a nationwide quarantine. I believe one of the only types of businesses currently allowed to operate are grocery stores. We've seen major spikes in engagement for Esselunga, Supermercato24, EasyCoop and CiaoSpesa. 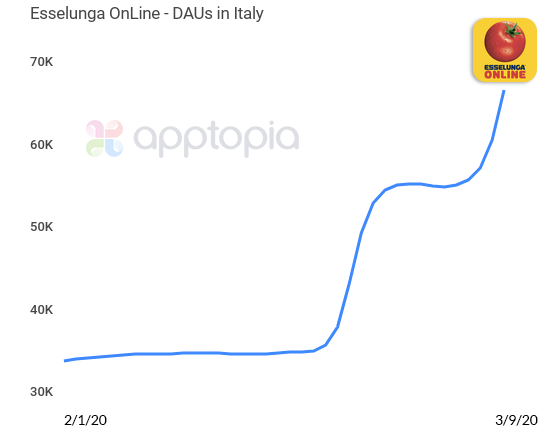 Korea - Korea's calming. Like China, Korea was hit early by the virus. While grocery-delivery apps surged during their high-alert stage, they have been cooling down this week. Not included in this graph below is Coupang and Karrot. Both of these apps were already trending up, so while they are receiving high engagement, it is nothing too out of the ordinary. (Coupang is a grocery delivery app, where Karrot is a community-based buy/sell app, where neighbors can exchange items).

China - China has a lot of different food & grocery delivery apps, the majority of which can deliver both restaurant food and grocery food. The two apps which experienced the most significant movement were Hema-Tasty Life (Alibaba Group) and Ding Dong Shopping. Both claim to get you fresh food in under 30 minutes, with no human contact. In February, both apps received their highest number of new installs ever. Feb. 9 was their record-breaking day: Hema with 75K downloads and Ding Ding with 70K. As you can see, like Korea, things have calmed down since. 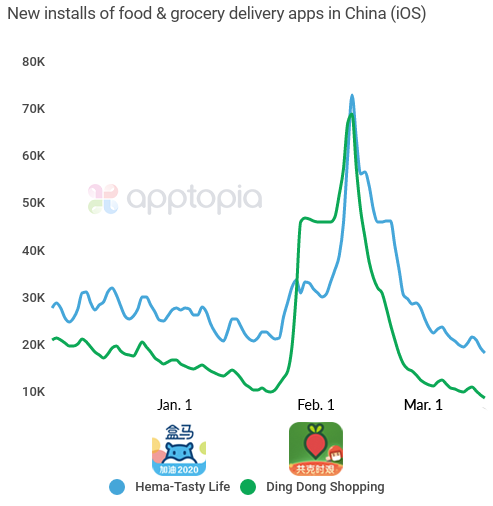 I think it's risky to be ordering Uber Eats right now, but I suppose it's better than going to a populated restaurant. And, at least, apps like Postmates are adding a "no contact" option to their apps.

United States - While my colleague Adam Blacker recently reported that food delivery in the U.S. is finally cooling, COVID-19 may cause it to rise again. So far, the numbers are not significant, so stay tuned for an update on this.

Italy - DAU of Just Eat and Deliveroo in Italy are up about 10% and 6%, respectively, since Feb. 1. However, DAU for these apps peaked on March 3 & 4 and is now falling (and will continue to fall) as most businesses are officially closed. We'll update this chart soon to reflect the change. 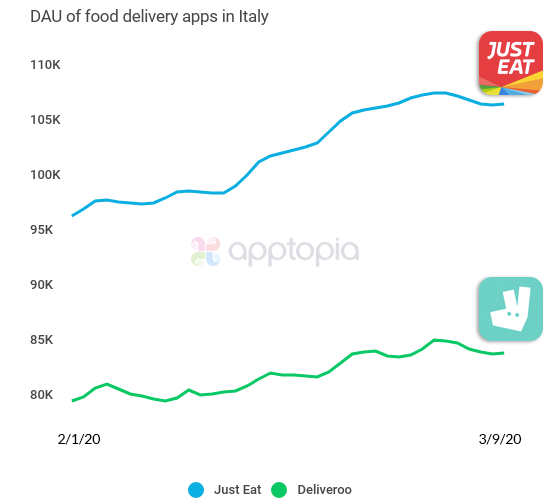 China - Mobile app sessions dropped for popular Food & Drink apps in China. However, Luckin, KFC and Starbucks are all rebounding as they start allowing for mobile pick up orders again. We imagine we'll start seeing similar patterns develop in the U.S. and other regions. 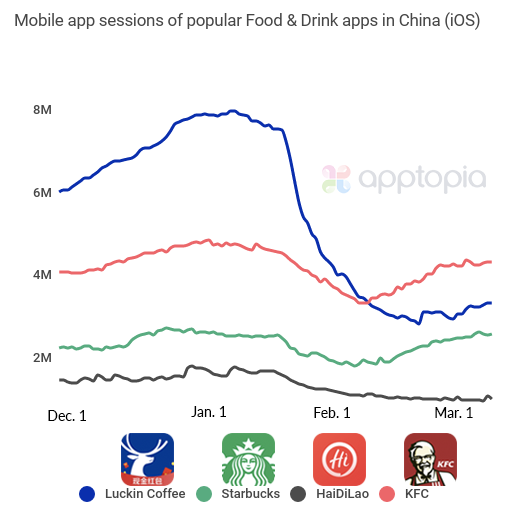 Tweet me @LenahanMadeline if you want me to look into a particular app or market.