The US version of Discovery Plus officially launched one month ago. Since then, the mobile app has been downloaded about 3.3 million times total across iOS and Google Play. Discovery+ labels itself as “the only streaming service with the greatest real-life entertainment from your favorite TV brands— including HGTV, Food Network, TLC, ID, Animal Planet, Discovery Channel.”

To enjoy this content, the service currently charges $4.99 per month for its ad-supported version, and $6.99 a month for its ad-free version. In comparison to other SVOD services, Discovery's prices are fair. And like Disney+, Discovery+ is also offering a special deal to Verizon customers.

Create a custom report on SVOD apps, or any five apps of your choosing

You’ll notice that I wrote “US version” at the top. That’s because Discovery+ consists of several apps, all of which launched in different regions and at different times. To make matters slightly more confusing, it appears that there are multiple apps available in certain countries. Why? To accommodate all of the different devices in which the app is available.

In the US, for instance, there’s the mobile version of Discovery+ (one on iOS, one on Google Play). This is the one I intro’d with. The iOS one works for iPhones and iPads and the Google Play one, of course, works on Android devices. This app is also fully integrated into Apple TV. While its logo there appears slightly different from the regular mobile version, it is otherwise considered the same app.

This is where it gets a little funky...unlike Apple TV, Android TV has a standalone Discovery+ app in addition to the mobile version. This separate Google Play app has been downloaded in the US approximately 310K times on mobile since it was released. For the purpose of our analysis and this blog, we will not focus on the Android TV app. Instead, we will focus on the launch of the mobile, US version of Discovery+. But, before we do, let’s quickly run through Discovery+ abroad.

Discovery+’s largest and oldest app launched in August 2019 in what could be considered Eurasia: Sweden, Denmark, Norway, Finland, Japan, Spain, Netherlands, Italy, U.K., and Ireland. This app, over a year old, has been downloaded approximately 6.7 million times.

Then, there’s the Google Play app that was released in India in March 2020. In its 11-month lifetime, the app has been downloaded 4.6 million times.

And, about three months ago, another Discovery+ app launched in the UK and Ireland. It’s been downloaded  520K times, and according to language in its ‘About’ section, may be a replacement app for the one currently used in those countries.

Discovery+ plans to expand into additional markets in the coming year. 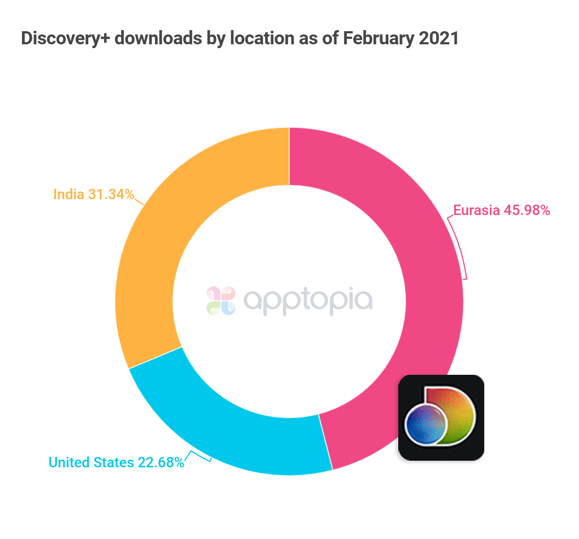 Evaluating the US Launch

In just one month, Discovery+ is catching up to its predecessor Discovery Go. Discovery Go, which launched on mobile in 2015 in the US, offers similar content, but requires a cable subscription. In its lifetime, the Discovery Go mobile app has accumulated about 5.81 million downloads.

In comparison to other recently-launched streaming services, Discovery+’s first-month performance on mobile is strong, but not unexpected. Peacock TV, which launched its mobile app back in July, amassed about 3.7M downloads in its first month live. HBO Max, which launched late May, amassed about 3.1M. This means that Discovery+ falls right in between these two with 3.3M in its first month. 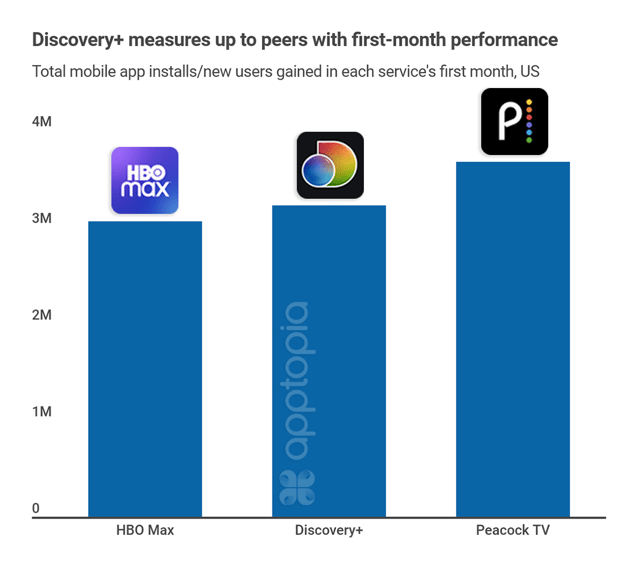 More interesting than first-month stats is sustained (or not sustained) new user growth over time. During Discovery+’s first month live, HBO Max gained 3.4M new users on mobile, and Disney+ gained 3.6M.  Peacock TV, on the other hand, only gained 1.9M new users. If Discovery+ can maintain its growth, it may be able to keep up with the likes of HBO. If not, it may join Peacock in the lower ranks.

As for engagement, the US app averaged just shy of one million daily active users in its first month (990K), giving it a stickiness score of approximately 62% (stickiness = DAU/MAU). Again, we’ll see how this holds up over time.

So Far, So Good

All performance metrics aside, what do users think of the app so far? 66.2% of its reviews have been positive, with 100 of its most recent ones being 75% positive— a good sign for a new app overcoming typical launch issues. 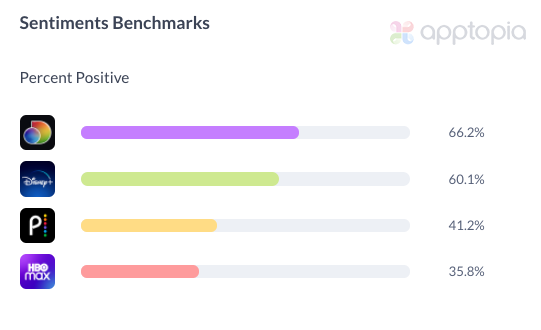 We've said it before: content is king. Bugs and design issues can always be fixed. But if your core content isn’t appealing, you’re in trouble. Discovery+ is clear about the type of content it offers, making it a potentially stickier choice than a SVOD service with a comparably more broad content offering.

Disagree? See how powerful content was in defining SVOD success in 2020.

Download the 2020 'Year of Streaming' Report by Apptopia and Braze