As college football kicked off in the U.S. on August 27, the top 5 Sports Betting apps did too, accumulating half a million downloads through Labor Day. This combined new install count among DraftKings, FanDuel, BetMGM, Barstool, and Caesars is up 39% from the same period last year.

Barstool Sportsbook's daily downloads grew the most between the two weeks, reaching a 329% increase on Sunday. Its growth slowed Monday, while second-fastest grower FanDuel continued to pickup, and the two apps met at 257%. 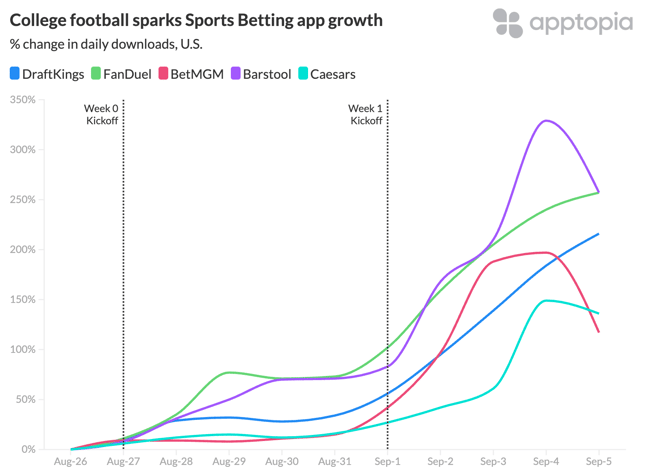 With the high volume came poor performance, particularly for Barstool. According to our Review Intelligence, 73% of its app reviews in the last week were negative and more than half of those were about "Performance & Bugs," relating to the app crashing. BetMGM had the second highest percentage of negative reviews at 40%; a third of them were also about "Performance & Bugs," as reviewers report issues with cash outs. This emerging market appears to remain focused on acquisition tactics at the expense of investing in a user experience that promotes retention. All five offered new users a $1,000 risk-free bet this weekend, and Caesars upped that to $1,250.

In fact, Review Intelligence indicates that not one of the top 5 Sports Betting apps has all the desired features, so bettors are likely using more than one app to place different types of bets and shopping around for different new user promotions. This creates an ever-shifting market share when evaluating by downloads.

For example, as download leaders FanDuel and DraftKings duke it out for market share, the majority of user reviews rate DraftKings more positively for faster payout and live betting functionality that does not lag. However, "FanDuel" appears as a top 10 all-time review keyword in its reviews, as users mention it's where they go to place parlay bets.

The engagement race between the two reveals that parlays may matter more to these users. Since FanDuel launched parlay bets in February 2022, it tripled the margin between its monthly active users (MAU) and DraftKings' from the prior year.

DraftKings looks to have realized this. Two weeks ago, it released updates to improve parlay bets and promoted it in the app description. 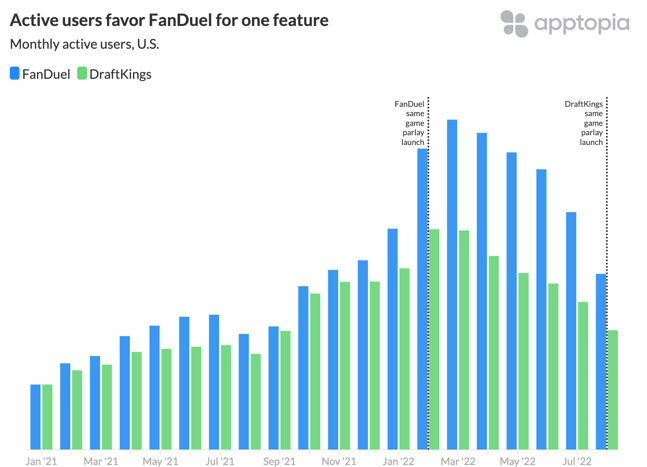 The top 5 Sports Betting apps grew 259% year-over-year in 2021, as more states in the U.S. legalized online wagering. Remember that the novelty was intensified as sports returned from cancelled seasons in 2020. This year, the market is on pace for positive growth, but it will likely be in the single digits as growth followed more seasonal trends that favor the NFL season. MAU for the market has been declining since college basketball's NCAA tournament (March Madness) ended, but I expect it will surpass March levels in September.