Gamee, a social gaming network that connects friends in gaming challenges, recently made the list of the top startups from Prague that you need to “Czech out.” It was called out in recognition of its smart strategy—which makes use of messaging app players and platforms to make games playable and shareable with friends across apps. We kick off Women In Mobile to recognize the women behind the apps and reveal the lessons and learnings that have enabled them to build better products, teams, and brands. 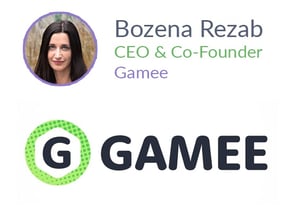 Gamee was founded in 2015 by Bozena Rezab, Jan Castek, Lukas Stibor and Miroslav Chmelka. The company has raised $2.8 million in funding from investors that include Google Launchpad, Credo Ventures, Initial Capital, Index Ventures and Socialbakers co-founder Jan Rezab. Prior to establishing Gamee, Bozena was responsible for YouTube monetization across European markets. She mentors a number of rising stars in the tech and digital space and is a keen traveler and experienced Yogi.

What are the leadership qualities that drive growth?

I think it’s the ability to create an environment for other people to grow and improve. I’m not sure if that is linked to gender, or to my own personality, but this focus on cultivating the talents of others, which is a real departure from commanding people--pushing people. I prefer to create an environment that nurtures talent because that is what you need to grow a company. You need people who have a variety of talents and the confidence to grow and improve so we can achieve what we are going after together.

Cultivate, not command, is what I’m hearing here. It’s also at the core of your company DNA and its ability to build an audience that is roughly a 50-50 split between men and women…

Today, the gaming community we have within Gamee, which is still a casual gaming platform, is also evolving to more hardcore gaming behavior. We see this skewing more to women, which is interesting. You would have thought this would have skewed to men, yet we have a high representation of women. It may be linked to the community and communication where female fans are sharing these games. Or it may be linked to the mechanics of Gamee and the user experience. When you join Gamee, we connect you to friends that are already on Gamee, or we suggest gamers who might be interesting for you to follow.  After you play a series of games like arcade or puzzle games, we use that to learn your taste in games and recommend more games you’ll appreciate. As you play games you build your profile, and we award you with special achievements and rewards as you build your profile. Typically, it's a competitive platform, but in a fun way.

You have hit a milestone of 60 million users since you launched. What has allowed you to build and keep the momentum? This is, after all, your first gaming company.

Gaming is indeed competitive and we made several decisions and partnerships that have allowed us to compete and win in the space. Early on—and earlier than most in industry--we partnered with messaging apps to bring our games or gaming experience into the app. We were one of the first 10 companies on Facebook Messenger, we were the first gaming company to launch games in Telegram, and we also launched as a chat extension in Viber.

To date we have launched over 70 games within those social environments. This gives us deep knowledge and insights around user behaviour. We know how games are played, how they are shared, and which games drive time spent or retention. So, we have learned a lot from that, which allows us to compete in the space. At the same time, the space is evolving to produce more distribution channels, more ways to get your games in  front of users. We don’t yet know how the distribution of content is going to change, and how it’s going to impact the App Store or Google Play. We are seeing super apps that are emerging, such as Messenger, WhatsApp and other chat apps and we saw the opportunity years ago to place games apps inside the messengers using the social graph they already have to reach their audience.

It’s a different distribution channel and I’m wondering if there is an impact on user behavior. What can you share?

Some games drive shareability, which means they are games that somehow trigger emotion—like players feel proud they have achieved something and, at this moment, want to share it to a friend. But these games typically do not have high retention. The idea is to have balance in the portfolio between games that drive attention and games that drive time spent, and make people want to stay in the game. We’ve also seen that people play several games at the same time, not just one game for a really long time, Instead, they play sets of games.

The average session is 30 minutes per daily active user per day, which is quite a lot. It's broken down into three to five sessions. The data also shows some interesting patterns about the times and places users are playing games. For example, we see European markets are playing during the day. This tells is they are playing while they are at work, at school, or during breaks. In Southeast Asian markets it’s a different story. They have less gaming use during the day, but they have much more in the evenings, after school and after work. They also outperform European users in time spent and overall engagement.

We monetize our games through advertising, mostly reward video ads. We have also experimented with playable ads. Taking, for example, a game that is popular on the App Store and making a smaller snackable version of it and then launching on Gamee. The assumption was that people would check it out and then, if they liked it, download the full version of the game on the App Store. We are still looking at the data because it’s an interesting model – but doesn’t work for all genres. We're also currently experimenting with different ways to introduce in-app purchases. We don’t like to put paywalls in the way of gamers who want to engage, just not pay. It’s here that we’re looking into ways how to give our users extras like customized features or characters for in-app purchases.

We have experimented with influencer marketing and learned an interesting thing: the most efficient way to engage audience is to work with users that are active on Gamee and became influencers on our own platform. What I mean by that is that they have built their profile on Gamee and they have a high following in the community. So, we’ re talking here about an influencer with say, 20,000 followers on Gamee and—more importantly—they are active on Gamee. These are power-users who are able to drive retention on the platform—but they’re not famous outside the platform. Their engagement and their interaction with their followers is genuine, and that drives the community.

Yeah—and that’s the interesting part. If you take the big stars and influencers that everybody knows, what they're able to do is to bring a large amount of audience because their followers will do whatever they do. So, you bring in a large number of users, but you can also lose them just as easily because it's like a wave that comes and goes. It's not sustainable and it’s not enough to build a product on this because you're only getting the waves and, of course, these influencers are also getting more expensive.

So, we prefer to look into ways to identify and incentivize micro-influencers, power-users on our platform. At this scale, it's very hard to keep one-on-one relationships, which is why we're building communities with this aim--like a Gamee lovers group on Facebook. It’s not rolled out yet--but we're working on features that will empower our hardcore users. It’s not money they care about; it’s building their own audience and giving to the community.

It’s a smart approach and a great learning to share. What else do you do to stay one step ahead of your competitors?

It starts with how we start our day as a team. We look into our own data, what's going on within Gamee. Then we look what's going on in the market and the market data. We have a weekly team meeting we call “all play”, where we play all sorts of different games and talk about them, what and why we think works.

It's not only how we stay on top of games; it's also how we watch tech players. We review what their priorities are and how their roadmap is shaping up. This is critical because these companies influence the future of our industry and how everything—messaging apps, social media, app marketing--is going to evolve.