Just over a month ago, Google Pay relaunched with new features: tap-to-pay, peer-to-peer, personal finance aggregation, customizable deals, and other traditional banking services. Some have compared the app to Venmo, but I’d say that Google Pay is now more all-encompassing.

Two days after the relaunch, on November 20, Google Pay became the #1 Finance app in the Google Play App Store. By December 9, it reached the #1 Top Overall spot, and has remained there since.  As for the iOS store, the app became #1 in the Finance category on December 16 and #1 Top Overall on December 20. These are the highest rank positions the app has ever held according to our record. 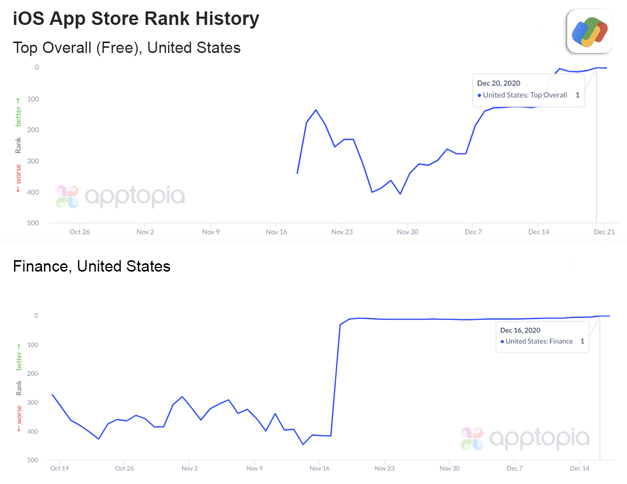 Before we dive further into Google Pay's performance, let's quickly talk about its history. Google Pay first launched in 2013 as a fairly basic payment app. This is not the app pictured above. This is the app that Google is currently phasing out, making most features inoperable by January and adding "(old app)" to its App Store name. Its largest market appears to be Russia, followed by the U.S. In the U.S., daily downloads rarely exceeded 20K, at least over the past four years.

In 2017, Google launched another Google Pay app. This is the one that recently got all the new bells and whistles. Up until now, India was this app's primary audience. The app has been downloaded almost 300 million times there, compared to 5.7 million times in the U.S.  However, the U.S. is officially overtaking India as its largest generator of new users, adding about 321K new users yesterday compared to India's 220K. 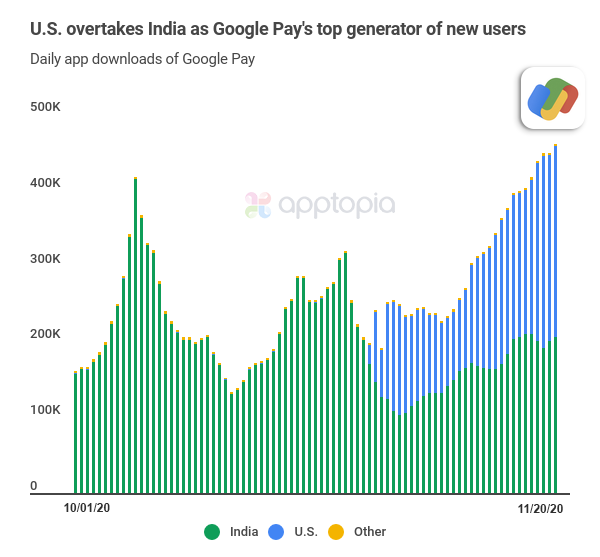 Determined to expand its presence in the U.S., the app is offering $21 referral bonuses through January 1st. This, in addition to its newly added features, have lured in about 4.8 million new users from the U.S.  If you were to compare November 17 to December 22, the app has increased daily U.S. installs by a whopping 130,387%. 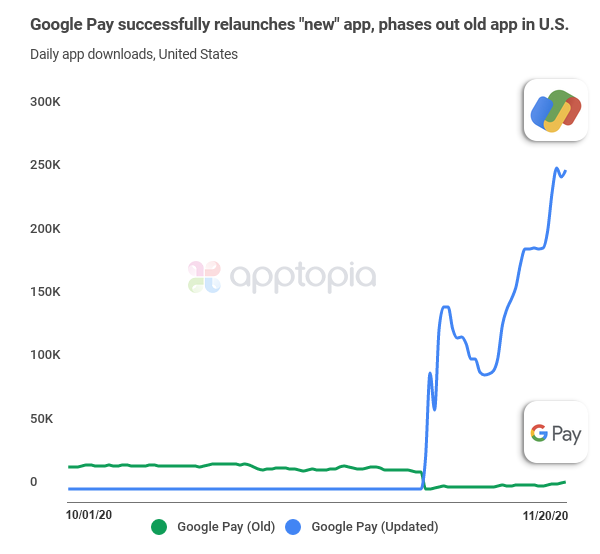 But with more users comes more critics.  Anytime an app updates or relaunches, we tend to see an influx of user reviews– many of which may be negative as bugs are ironed out. As such, Google Pay's user sentiment has dropped over 10% from November to December. Aside from the usual launch bugs, some people just don't like change.

Haters gonna hate? Hard to tell right now. Google Pay has surpassed both Venmo and Cash App in December downloads in the U.S....but this is to be expected; Google is a marketing machine, and Venmo and Cash App have already had a lot of time to establish their user bases. 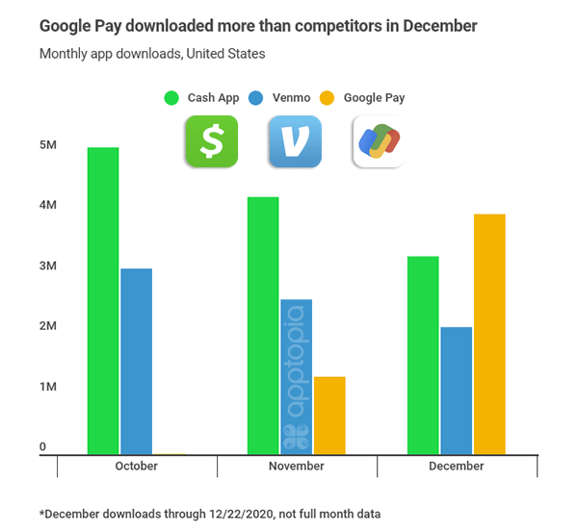 Still, Google Play is off to a strong (re)start. And in a few months, we'll be able to tell based on the app's retention rate if theses new users are here for the long haul or if they were just in it for the referral bonuses. Want to follow along with us? Create your own peer-to-peer payment report below.