Apps have not only changed how we live, but also the design of the devices we use, even beyond the smartphone. However, the road won’t always be smooth and this week saw two young companies, each of which used apps differently, react to hard times.

The earlier bad news came from GoPro, makers of cameras that can stick onto anything and drones that have a tough time staying up in the sky. Following the recall of its long-delayed Karma drone, the company announced that it will be laying off employees and shuttering the entertainment division. Despite assertions that the company’s media ambitions never made sense, it’s clear that it was trying to follow in the footsteps of Red Bull. The price of a can of Red Bull makes it far easier to build a mass market community that lends itself to such extravagances as stadium and sports team naming rights.

GoPro continues to sell well among its core customer base. While actually not its most popular app, downloads of GoPro’s iOS Capture app is a good proxy for camera sales, which temporarily recovered over the course of the year after a huge holiday spike last December. Also interesting to note is the correlation between GoPro Capture downloads and the company's stock price over the year. 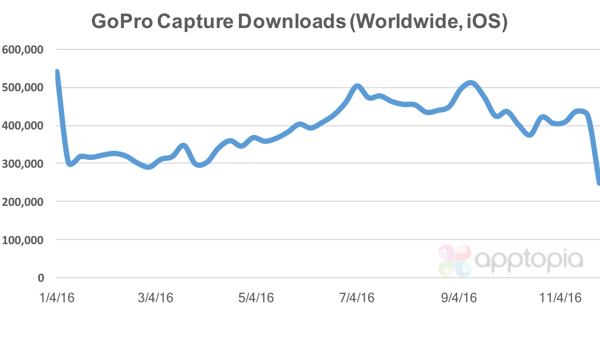 However, a sadder fate awaits the product roadmap of Pebble, the smartwatch pioneer that broke Kickstarter funding records twice. Pebble managed to do something few companies did, create a store within an app on iOS. But while the Pebble watches had been available at lower prices than watches from Samsung and Apple, Pebble certainly couldn’t compete with the distribution of those companies, particularly as smartwatches in general are still struggling to find their footing as a category.

While the Pebble app also saw spikes last holiday and after the release of the second generation of its color watch, the overall numbers were but a fraction of GoPro’s. Pebble will now be acquired (and eventually shuttered) by more established device startup Fitbit, which has had its own share of struggles. Its trackers have started to blur the lines between fitness band and smartwatch. Like GoPro, Fitbit at least knows its customer base. And unlike GoPro, it’s a potentially broad one.