3 Tips to Kickstart Your Influencer Marketing

Promoting your app on Instagram is a must - the platform has 1 billion monthly active users and holds the attention of almost every Gen Z and Millennial with a smartphone. For a great example of influencer marketing done right, look no further than AmpMe, an app that lets you play music louder by turning your friends into a portable sound system.

Crafting a non-spammy, promotional message that resonates is the biggest challenge on social. AmpMe chooses to go down the comedy route and seamlessly integrates the app to support the story. The key point being: their videos aren’t focused on the app, they’re focused on the characters and story development around it.

When it comes down to it, no one cares about your app’s features, they only care about how it benefits them in their everyday life.

3. Get the right micro influencer

It’s important to keep in mind that influencer means someone with influence, not necessarily a lot of followers. The influencers that AmpMe works with aren’t of “Kim K caliber” because they aren’t relatable to their audience. Also because it would obliterate their marketing budget. Instead, the company cost-effectively works with rising artists and comedians. These accounts don’t have billions of followers, but they do have highly engaged audiences that they connect with on a micro-level. 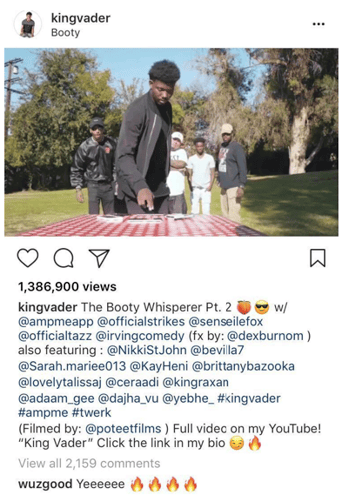 Relying on tools and numbers can only get you so far. This is why it’s so important to have someone on your team, whether it’s you or a marketer, that looks and behaves like your target user. You need to understand the community you’re trying to reach on a very personal level (motivations, struggles, comedy preferences, etc.), which goes a step further than hobbies and basic demographics.