Hulu Just Had Its Best Quarter Ever

Earlier this month, Hulu struck a deal with the National Hockey League to become the official sponsor of the NHL’s Stanley Cup Playoffs. As I watch my Boston Bruins on YouTube TV, I do feel weird about seeing all those Hulu logos everywhere. But Hulu’s ad blitz has been paying off if we look at the explosion of growth it has experienced over the past year.

More importantly, the app just had its most lucrative quarter ever, generating $37.6M in IAP Revenue, more than the two previous quarters combined. I should note that we are only talking about the United States as Hulu is not available with live TV in other markets. 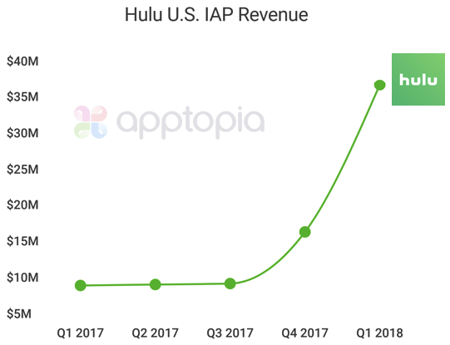 April is on track to continue Hulu’s revenue and active user growth. YouTube TV is also seeing success but is not as widely available as Hulu yet. It has had a staggered rollout and is not available in every state but is available across 99 different cities in the United States. 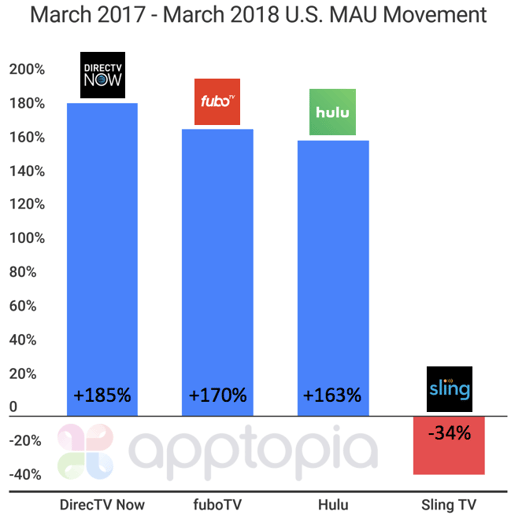 We excluded YouTube TV from the above chart considering it launched in early April of last year. In its first month, we estimated the app to have 138,000 unique users, and today we see the app has grown to about one million monthly active users. There have been reports of YouTube TV having about 300,000 subscribers. Just like a Netflix login, people in households and maybe even some ex-girlfriends are sharing a login. We excluded PlayStation Vue as well because while it fluctuates, it has essentially not grown or diminished its MAU.

Looking at download and grossing rank in the U.S. iOS App Store, Hulu and YouTube TV are the dominant forces for live cable-like television options in the Entertainment category. It's no surprise other digital platforms are growing as well. Unfortunately for Sling TV, it is not riding the same wave of growth. Strategy Analytics believes its subscriptions are slowing which may be directly correlated with the substantial growth we are seeing for DirectTV Now.