Instacart, Walmart Grocery and Shipt have all been setting record download days for downloads of their mobile apps each day for the past three days. Yesterday, Sunday March 15, 2020 was again a new record for each app.

We've been getting a lot of inquiries asking if food delivery is on the rise in the United States due to the spread of COVID-19. We very recently reported the market is actually cooling in this country. Before we check back in with food delivery, let's look at grocery delivery.

Even though Walmart announced it is slowly closing its standalone grocery delivery app and rolling it into its flagship app, new installs have been increasing. Instacart and Shipt (owned by Target) have also seen rises in new installs of their mobile apps. This makes sense as shoppers want to come into contact with less people but still need to accumulate supplies and groceries to hunker down during a period of intense social distancing. 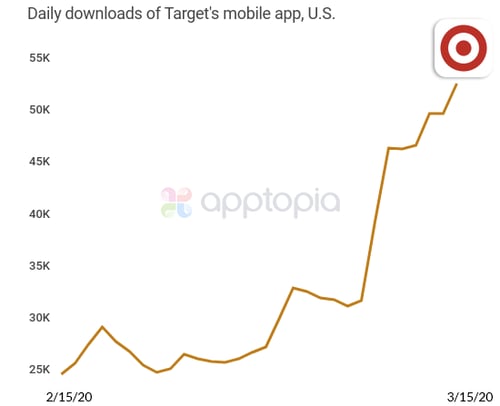 We've also noticed people in the United States have been turning to Target to stock up on groceries, entertainment and everyday essentials. March 15th's downloads saw an increase of 98% over the average number of daily downloads in February.

Back to food delivery. As we said earlier, the market had been cooling in the United States. In the beginning of March, it did start to pick up but has already cooled off again. Even with the promise of non-contact delivery from these providers, people are starting to understand that consistently ordering delivery is both expensive and, quite frankly, not as safe as cooking meals within your own home.