Storytelling has been around as long as humans have. Whether it be in the form of cave paintings or for the reason of explaining why the sun rises and falls every day. The tradition takes places across every culture and every race. Fast forward to 2018 and we’ve continued this love for a good story into our mobile apps. Two popular vehicles have been having success in the top charts, enough to catch my eye.

Interactive story games enable their users to create and build upon their own stories and live out lives or experiences that are not their own. Chat fiction apps take a different approach and put their users in the position of a voyeur, watching someone else's story unfold through text messages on their personal device.

Apptopia researched several top apps in both of these storytelling buckets to give you an idea of the audience they each attract. The demographics from interactive story games tell us a younger audience engages with this style of game.

Chat fiction apps hit their peak about a year ago but they're still going strong. Interactive story games are now progressing to their eventual peak with new games launching and hitting the top charts every week it seems. 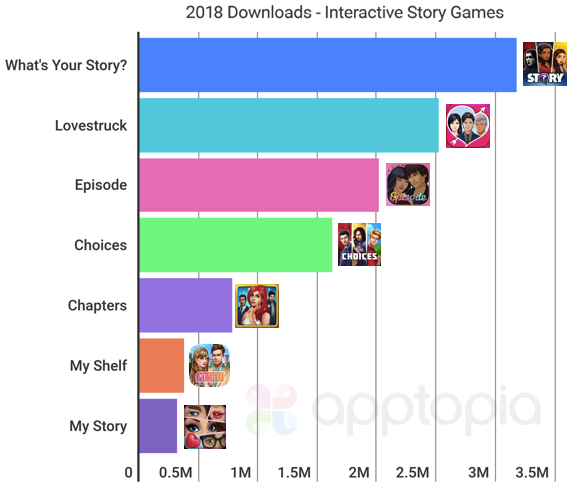 While Episode and Choices are not getting as many downloads as some newer apps, they have more current active users. As a grouping, revenue in this space has grown. 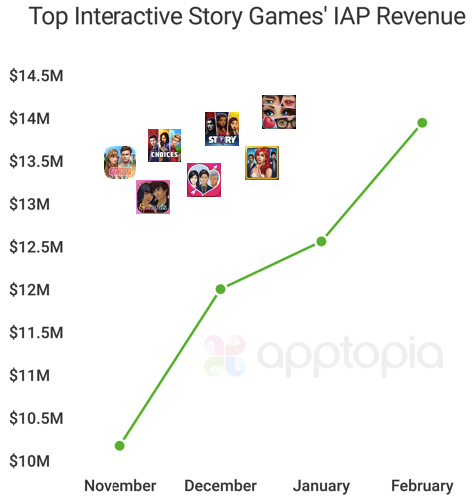 The top three apps here are Choices: Stories You Play, Episode - Choose Your Story and What’s Your Story?. All three of these launched their iOS versions on different dates than their Android versions. Episode has been around the longest with its iOS version launching in late 2013. Choices launched in mid 2016 and What’s Your Story launched late last year. Here are their grossing charts for the App Store in the U.S. for the past 90 days:

Even though What’s Your Story? launched late last year, it did not start ranking until the end of January. Episode and Choices both see bumps toward the end of December where they had storyline additions and updates. Similar to tuning in for a new TV episode or a new TV show entirely, this attracts people back into the action.

The popularity of these apps has not gone unnoticed. Developer Wooga just announced it will be refocusing on story-driven casual games while the new game My Shelf: My Choice, My Episode just launched this month for iOS and has been climbing the App Store ranks. The game is in beta for Android.

The top three apps here are Hooked, Yarn and Tap. Hooked launched in August of 2015 and is the first mover to this market. Yarn launched its iOS version in February 2017 and its Android version in April 2017. Tap went live on Android very late 2016 and its iOS version became available in February 2017 around the same time as Yarn’s. Here are their grossing charts for the App Store in the U.S. for the past 90 days:

Hooked is clearly the most successful in terms of revenue as it rarely relinquishes the #1 grossing spot in Books, but it also receives the most downloads and active users as well. Yarn almost always directly follows Hooked, and Tap almost always directly follows Yarn. Hooked really set the stage for a new type of Book app and now the genre dominates this category. These three apps often rank above major titles such as Amazon’s Kindle and Audible.