It's Instacart's Game to Lose

There is a sizable gap between Instacart and Shipt... and it’s about to get a whole lot bigger. From January 2016 through October 2018, U.S. MAU of Instacart’s mobile app grew 259% compared to 104% for Shipt. Last month, Sam’s Club announced it will deliver groceries via Instacart - bad news for anyone trying to compete with the $7B company. Sam’s Club is owned by Walmart, which has in-store pickup and grocery delivery of its own through its Walmart Grocery app. In the same timeframe mentioned above, the Walmart Grocery app has increased MAU a whopping 5480% - likely attributable to rolling out new service locations. 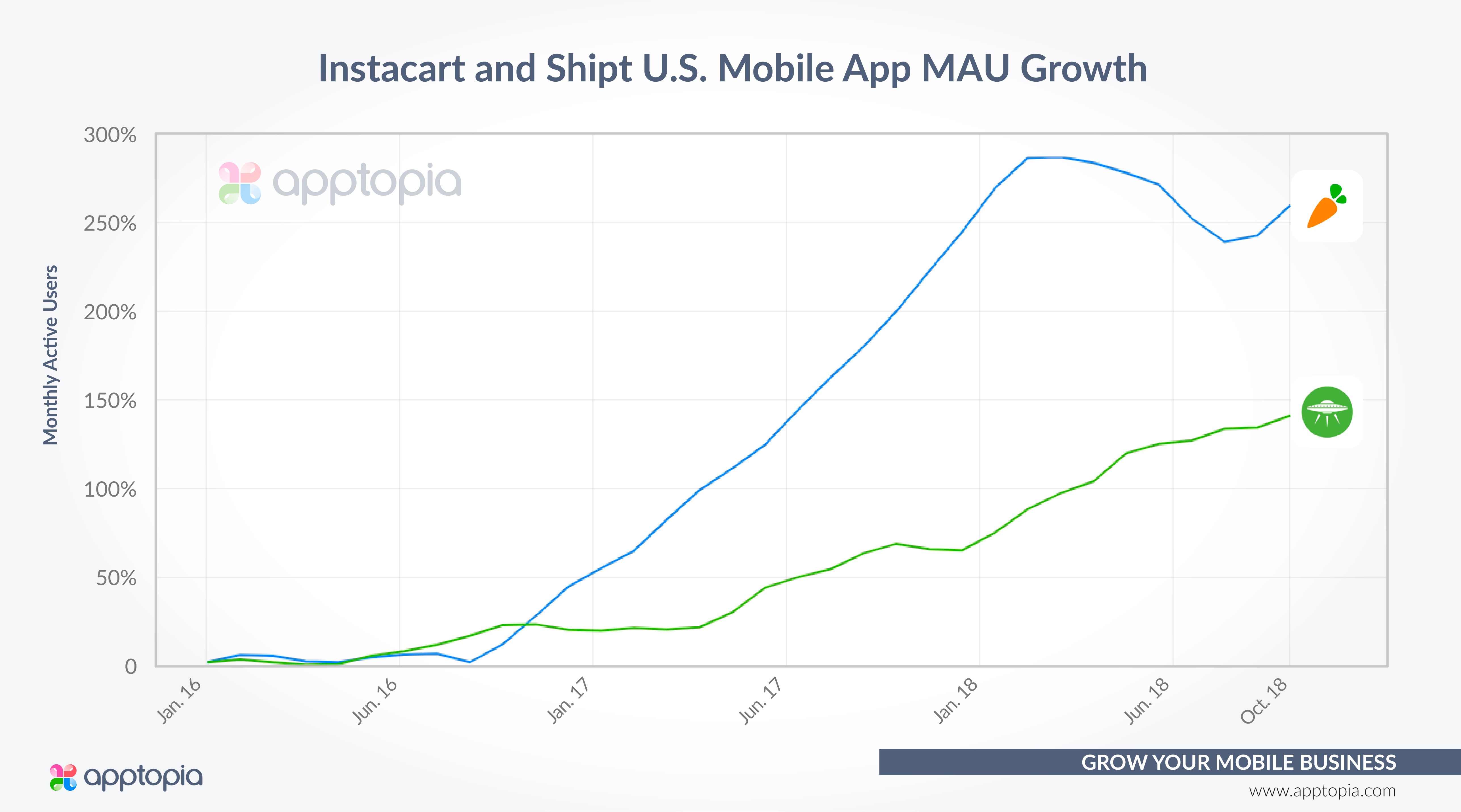 Toward the end of 2016, Instacart rapidly expanded locations, started delivering alcohol from select stores, and struck a deal with supermarket chain, Publix. In the above chart, you can see this is when the app truly started to grow its user base.

While Instacart offers flexibility (user can choose from multiple local supermarkets), Walmart Grocery is the superior app in terms of usage and rank. We have to keep in mind that Walmart Grocery offers in-store pickup, so it’s very possible a similar number of people get delivery from Instacart as do from Walmart.

The point is Walmart has access to a massive and mobile-engaged base that it can open up for Instacart. This partnership is still expanding and I believe it will lead to some truly impactful growth for Instacart. As I am writing this, it just came across my screen that Instacart is now offering in-store pickup, lending even more credence to this belief. 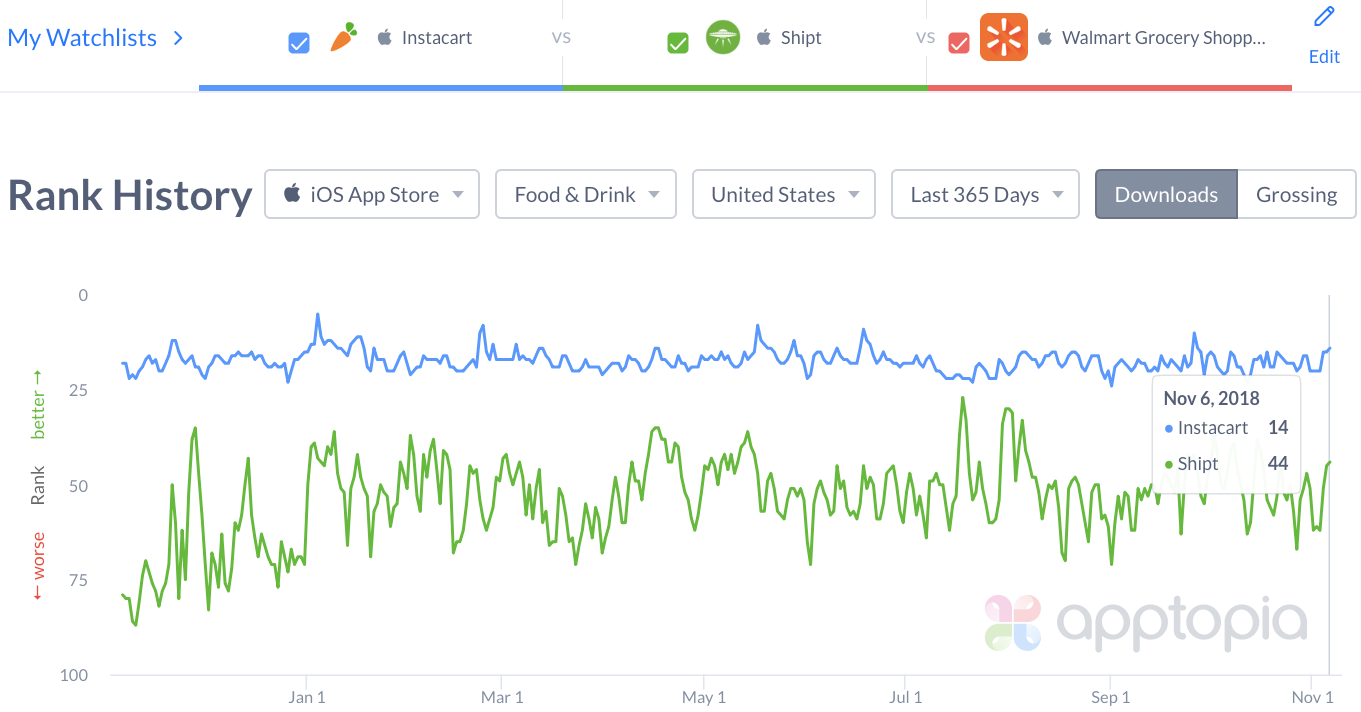 Walmart Grocery is not listed under Food & Drink but is listed under Shopping, where Instacart and Shipt cannot be found.

For those of you familiar with the space, now is probably the point where you are wondering what impact Target’s acquisition of Shipt has had on its success in the mobile arena. For now, Shipt is mostly acting as an independent company and delivery from Target still requires the user to have a Shipt account. The roll out for this partnership has been slow and unimpressive to date. You will notice a downloads bump after the acquisition in the below chart, but it's not significant when you take into the account the potential of this space. That could all change this holiday season though as Target said same-day delivery [via Shipt] will be available nationwide. 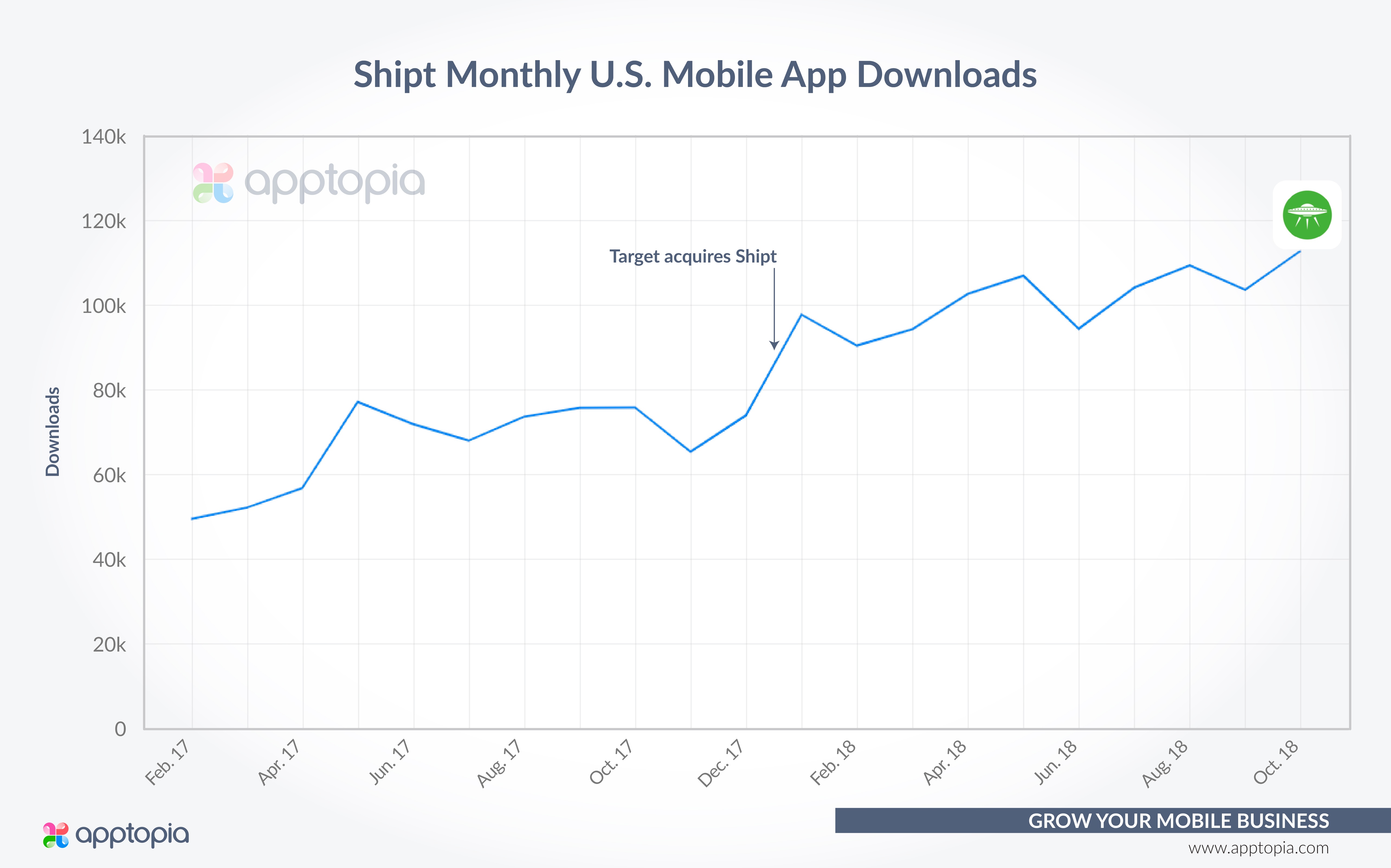 My takeaway from all of this is that it's Instacart's game to lose - unless an entity with built in infrastructure and a ton of capital to boot entered the game. Uber and Lyft are really the only companies I see doing this, especially when you consider Uber has already come in and done very well in the restaurant delivery space.