Job search apps have more engagement than ever, remote work of high interest 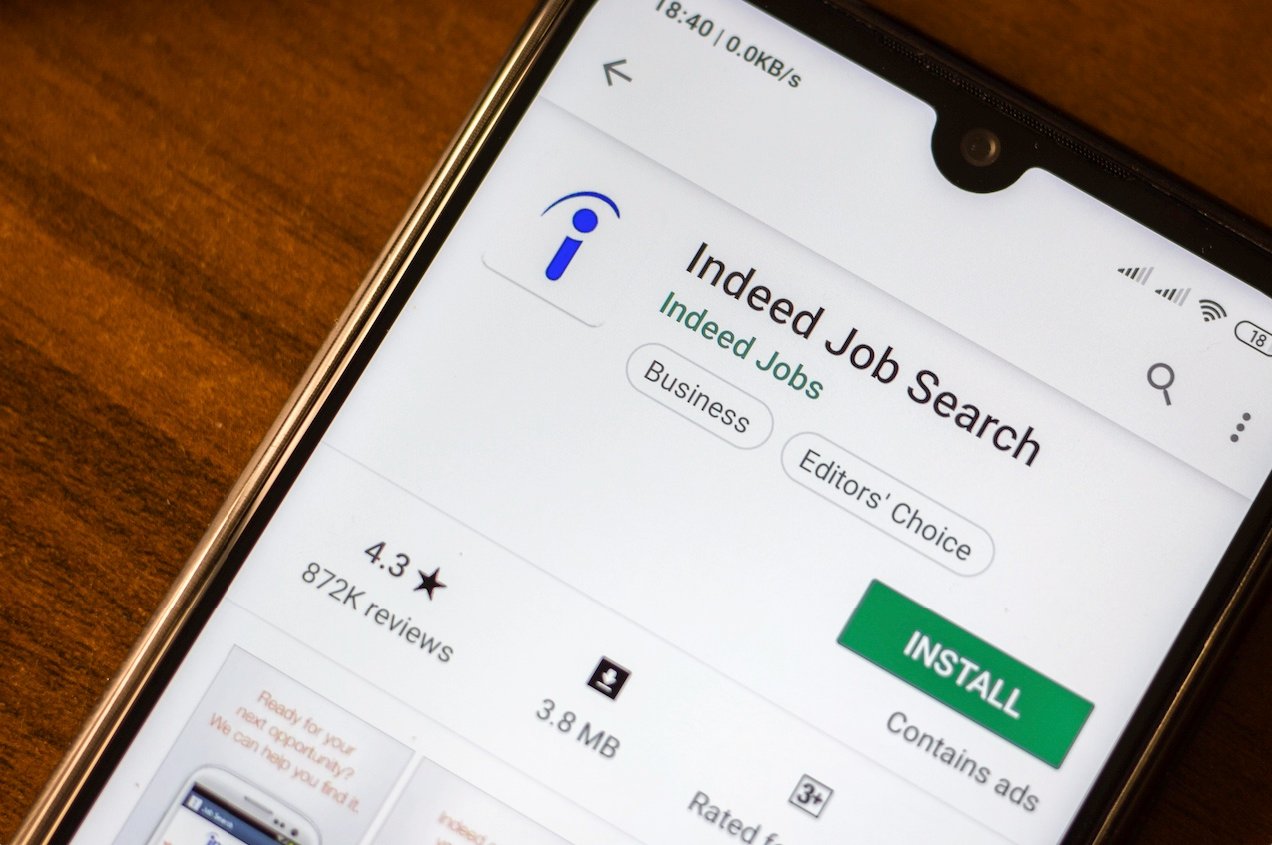 Combining the DAUs of the top seven job search apps have been hitting new monthly highs since March of this year. After a period of ebbing and flowing, numbers have been climbing steadily for the past 365 days. 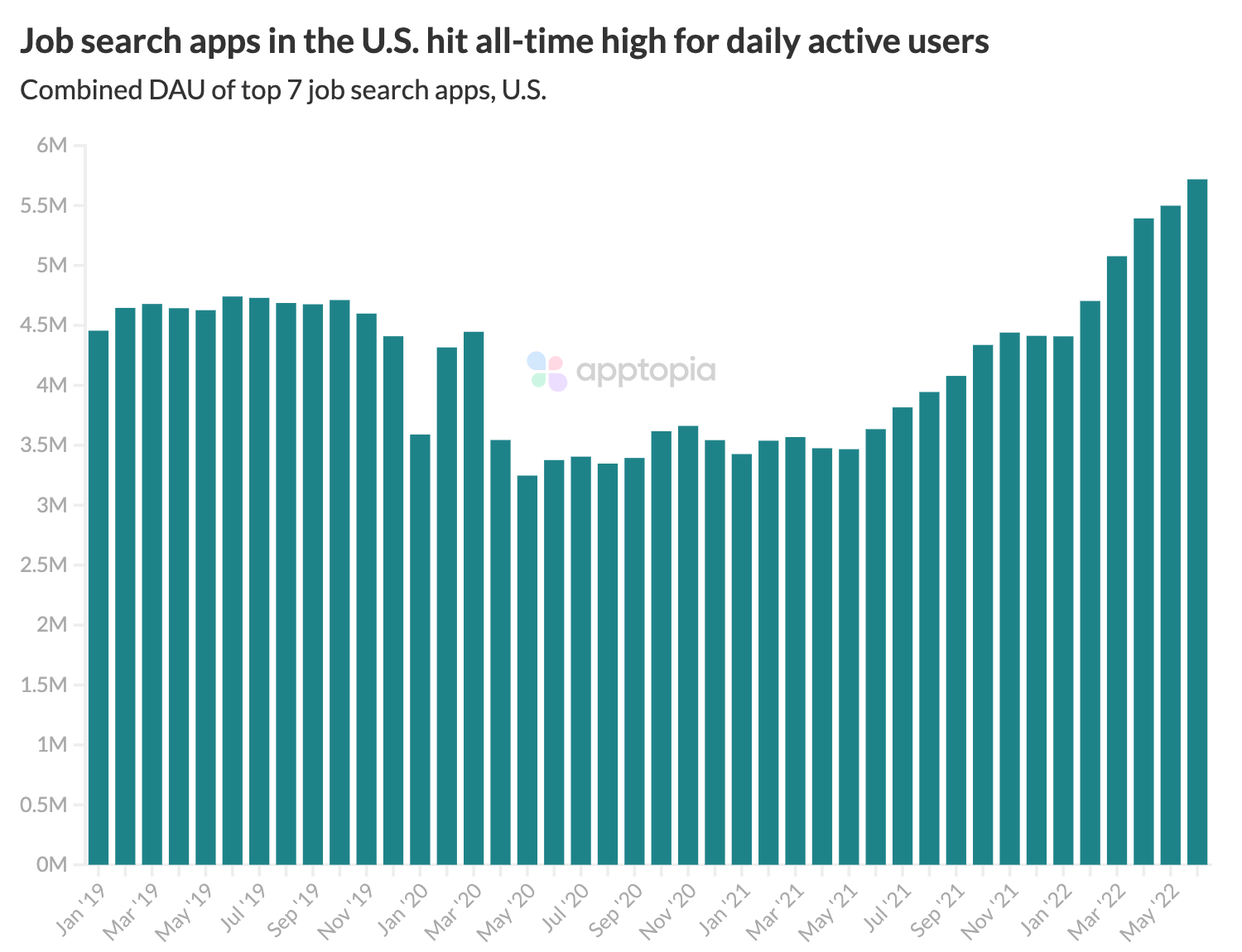 Average DAUs for the month of June have grown 57% year-over-year. What's super interesting to note is that no month this year has hit a record for monthly active users. This means that while the apps are adding new users (see downloads below), users who already have the apps are playing a large role here, meaning engagement has increased.

Job seekers on the whole seem to be playing nice with their current employers as most of the download spikes occur on Fridays as they wait for the weekend to start their search of job openings. That, or as another analyst on the team told me, layoffs happen on Fridays. 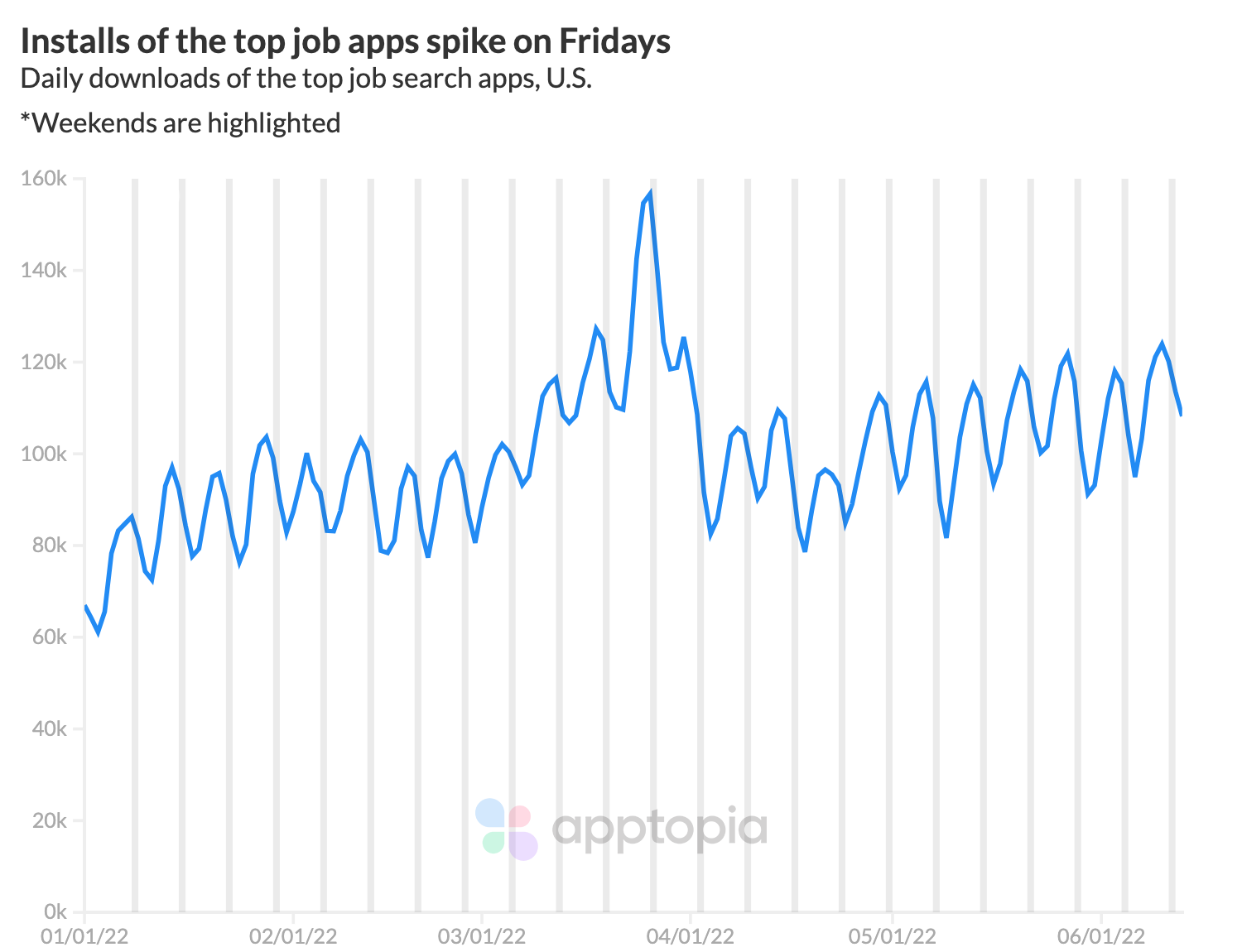 Year-to-date, the top three apps by both downloads and DAUs are Indeed, LinkedIn and ZipRecruiter. ZipRecruiter is growing the fastest, increasing its U.S. DAU by 37%, YTD. Only Monster and Snagajob have decreased in DAU over the course of this calendar year (-7.3% and -16.5%, respectively). Looking at current app market share, there is a significant step down in after Indeed and LinkedIn. 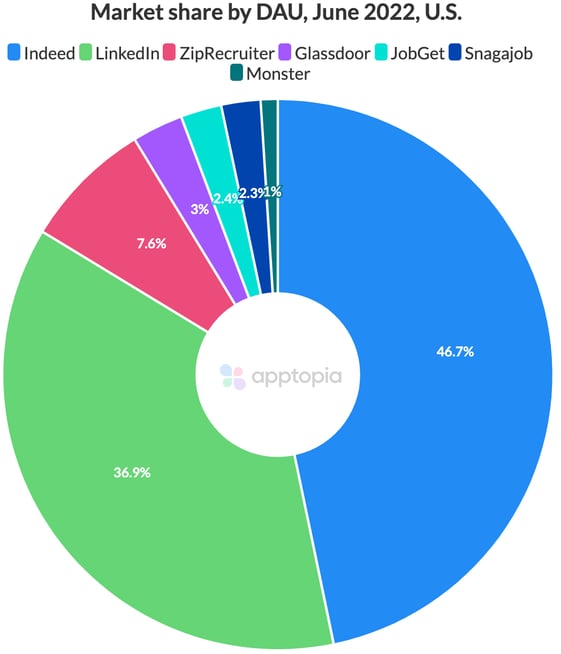 LinkedIn is the only app in this grouping that generates revenue via in-app purchases, and it hit an all-time high for U.S. IAP revenue in April 2022 and then again in May. IAPs for LinkedIn are to purchase its varying degrees of Premium membership, which enable both recruiters and job seekers. 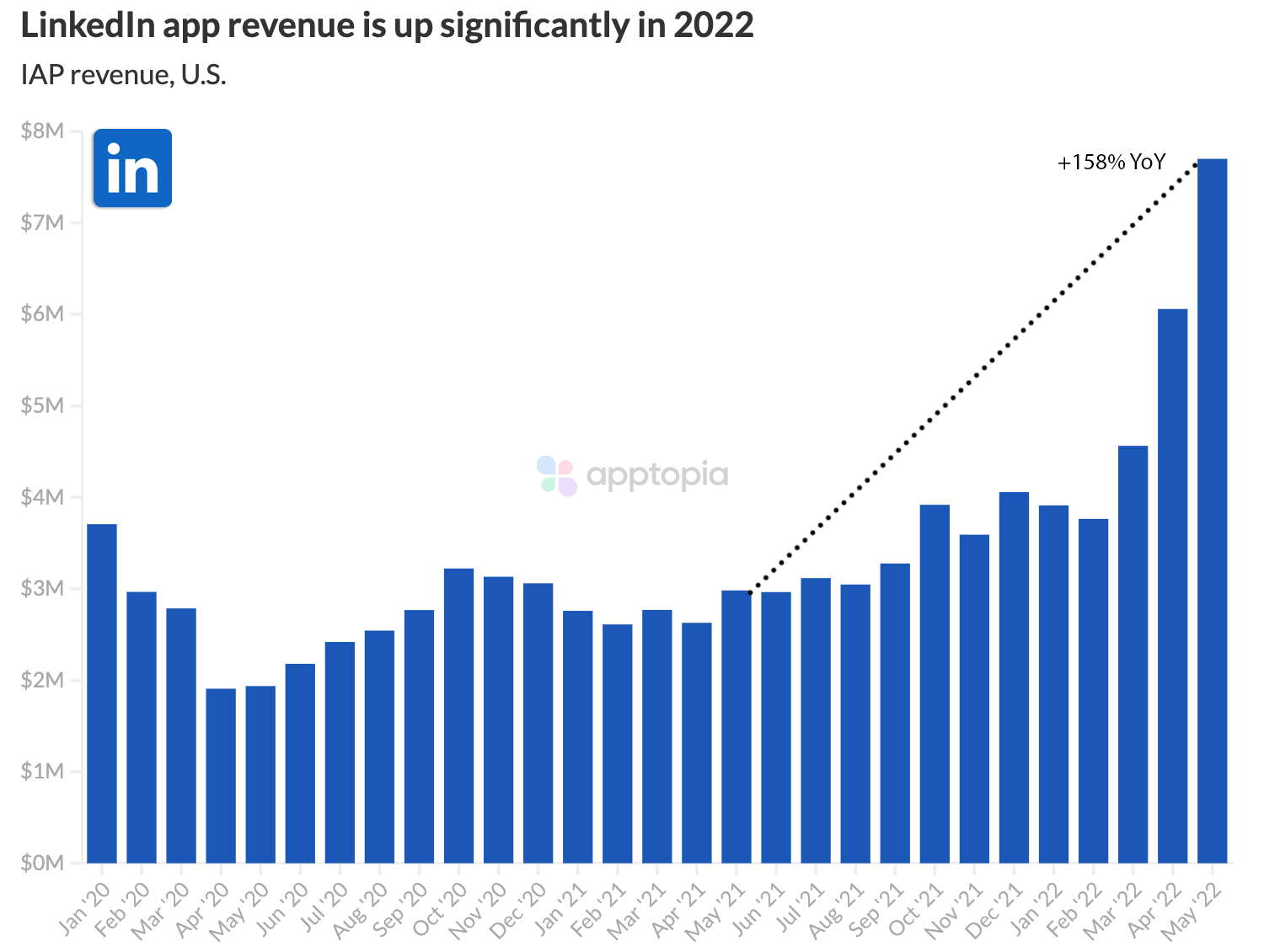 Indeed has consistently been bringing in more new U.S. app installs than LinkedIn since March 2018. According to Apptopia Search Intelligence, Indeed ranks #1 in iOS store search for the keyword "job" and "apply job." It ranks #2 for "job search." ZipRecruiter ranks #1 for "job search." JobGet and Glassdoor rank #3 and #4 for "remote job," whereas the rest of our top apps do not find themselves in the top five. JobGet also ranks #5 for "remote work" while the rest of the top job apps do not rank in the top 10 for the keyword.

According to Apptopia Review Intelligence, the number of reviews posted in top job apps with the keyword "remote" in them has increased 900% in 2022 compared with full year 2019. 2020 was when we saw the first large jump but 2022 is going to see an even larger jump. Many of these reviews are asking the app publishers to be able to sort open jobs by levels of remoteness; partially remote, local but remote, fully remote, etc. 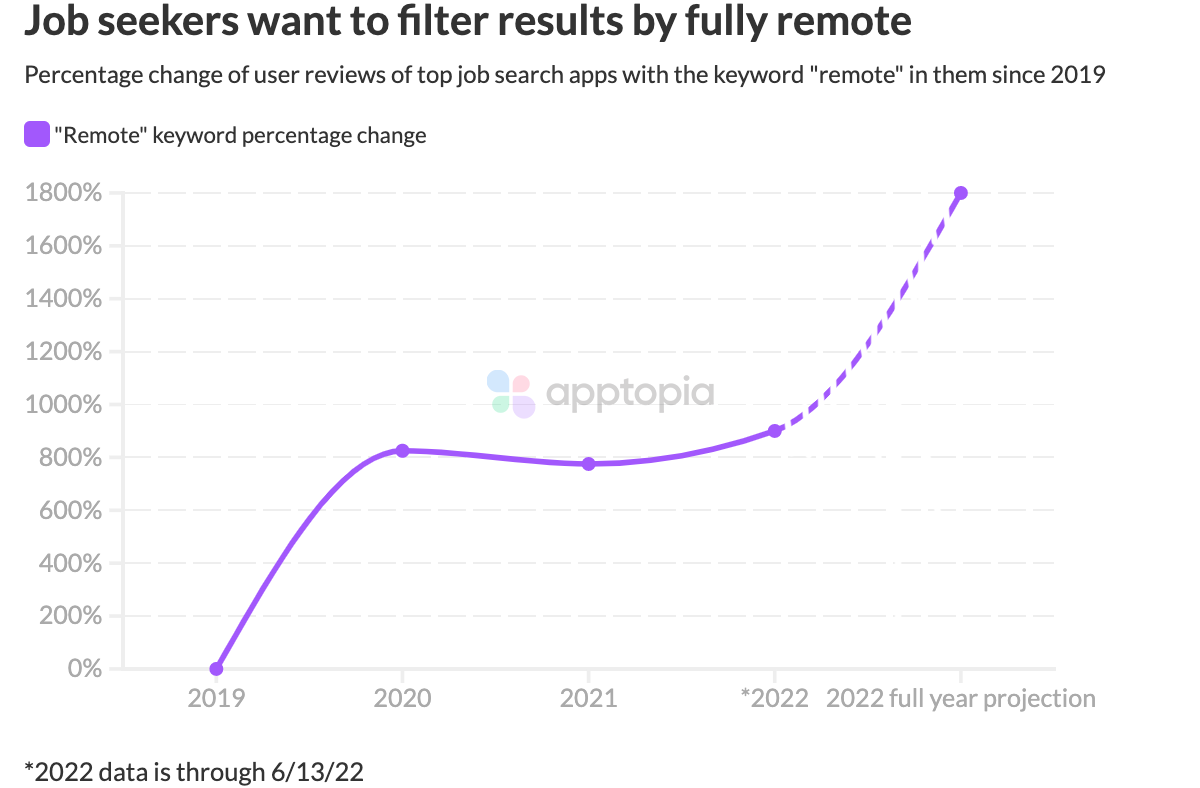 User levels of video conferencing apps Zoom and Google Meet look to have finally settled down in 2022. DAU numbers had been mostly falling since their height in 2020 but have leveled off so far this year, above where they were in 2019. From this, we can surmise that remote work appears to be the new normal for a portion of the workforce. 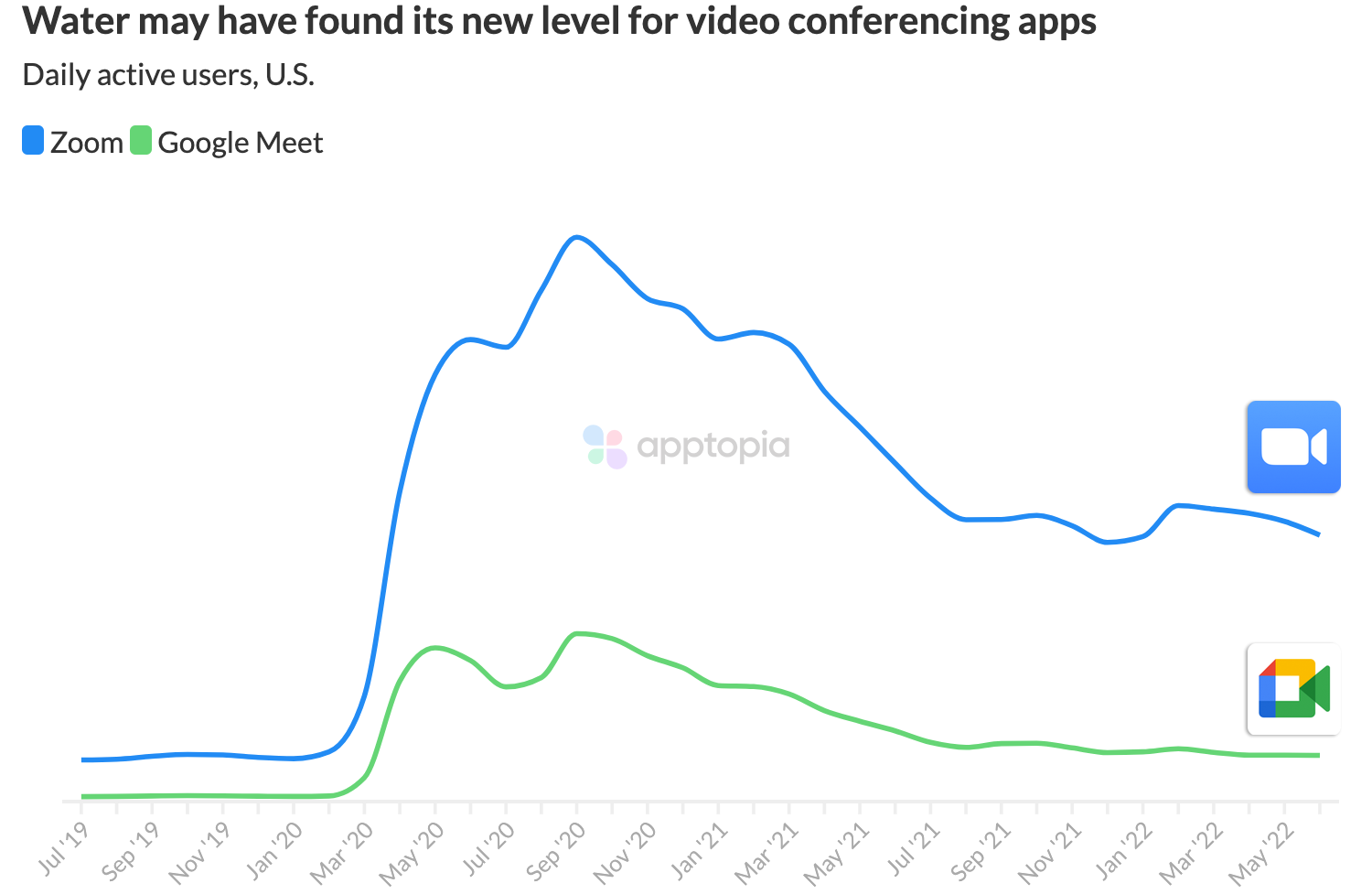 Another sign of the interest in remote work comes from Recruit Holdings, which owns both Indeed and Glassdoor. It has also published Fishbowl, a professional networking app, since July 2015 but only recently (2021) began describing itself as a place "where professionals go to connect and talk in a new era of remote work." Downloads of the app have grown more than 700%, YTD.