When we saw YouTube Kids pop up as an Entertainment category download leader and a couple of Kids apps pop up as Q4 2017 retention leaders, we wanted to dig in and get an idea for how well Kids apps are performing.

*The following data is for iOS apps only, as Google Play tracks its Kids apps in a less organized manner.

We found 33% of all iOS Kids apps are labeled as Games and 51% are labeled Education. Keep in mind that even if an app is technically a game or gamified, the publisher can decide not to list the app in this category if they feel another better suites it.

Facebook's Messenger Kids, which recently made news, launched in December and is still growing but not as rapidly as one might suspect. Apptopia's latest estimates come in at 55,000 total downlaods and 22,000 daily active users. 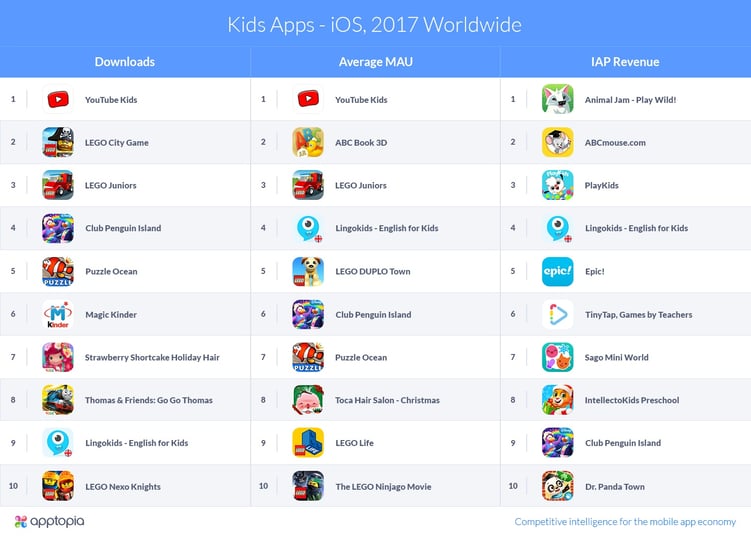 No surprise that the leader in IAP revenue is a game as Games is the highest grossing category every month. YouTube Kids is the leader in downloads and MAU both globablly and in the US. YouTube Kids has stellar user retention as well, getting 10.2% of new downloads to still be opening the app up a week later. The top 10% of apps in the Entertainment category, which YouTube Kids is also listed under, averages 8.4%.

While there are some singularly popular apps such as ABCmouse.com and Animal Jam, many of these successful apps come from large companies such as Nickelodeon (NOGGIN Preschool), Disney (Club Penguin Island), Lego (LEGO Juniors) and McDonald's (McPlay).

It has only been a month but 2018 is on track for more downloads of Kids apps than 2017 saw, however IAP revenue is on track to be slightly down from last year.