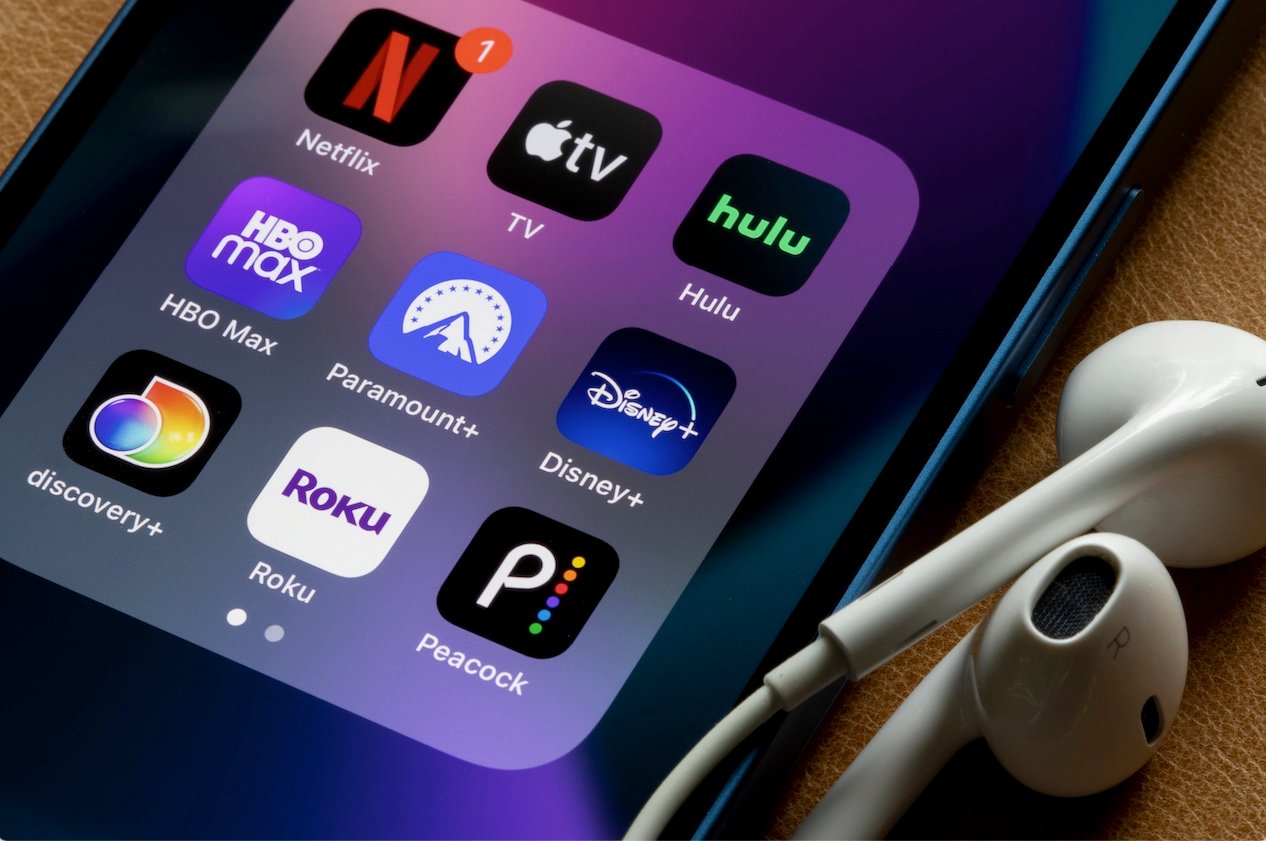 Competition for non-niche streaming video subscription apps is growing, but not just in terms of the number of players - in terms of actual performance. The fastest growing SVOD (subscription video on-demand) apps, by way of in-app purchase revenue, are Peacock TV, Paramount+ and discovery+. Over the past 12 months, they've grown by 133%, 107% and 25%, respectively.

Yes, Netflix is not included in the above chart. If you're an avid reader of this blog, you'll know that Netflix stopped accepting new in-app purchases in December 2018. Because of this, its IAP revenue is perpetually trending downward. The IAP revenue seen in Netflix's data today are all recurring purchases initiated prior to December 2018.

Amazon Prime Video's revenue is tiny because most viewers are receiving the service through their Amazon Prime membership, which is not paid via an IAP.

Disney+ has seen its U.S. IAP revenue fall for three consecutive quarters, with a 5% decrease in Q2, year-over-year. 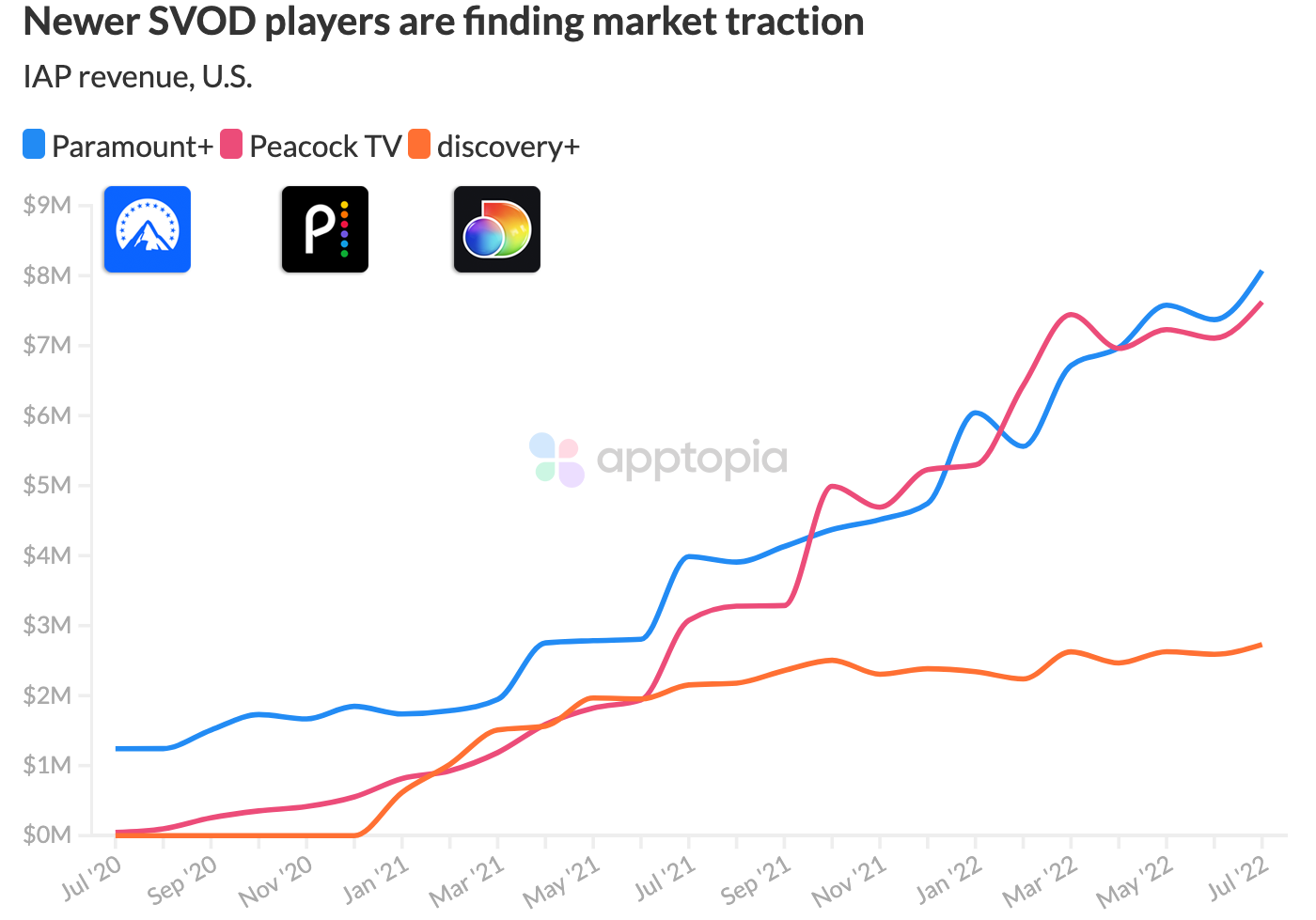 During the pandemic, when "outside entertainment" was shut down or minimized, it's reasonable to believe households purchased more than one streaming option, which helped enable these platforms to get off the ground (in addition to free trials). But now that outside entertainment has come back into our lives, along with inflation, consumers are likely making more price-conscious decisions. One of those decisions is to cut out or swap streaming services. Paramount+, Peacock TV, and discovery+ all have monthly plans starting at $4.99, which is less expensive than the industry heavyweights. Netflix and HBO Max start at $9.99. Disney+ started at $7.99 but just increased to $10.99. Hulu still remains available starting at $6.99.

Outside of price, most purchasing decisions are made strictly on the content. Even if the app is buggy or has a poor user experience, these SVOD services have large exclusive pockets of content that if you want it, you need to get from that specific streamer. Netflix has a really nice user experience but if they don't have the shows or movies you're interested in, why would you buy it? Imagine you have no interest in Italian food, you just do not like how it tastes. It doesn't matter how good the restaurant is, you're not dining there.

The content catalogs are clearly important, so when more companies get into the streaming business, there's less content that the more mature players are able to purchase. Instead the race moves towards new original content. It's a never-ending arms race now and these companies are not necessarily incentivized to make their actual apps better because most of their resources are put into the content which can acquire new users, new revenue, and hopefully keep that revenue around for a few years.

The above image proves my point, especially if you look at the extremes. HBO Max, which generates the most IAP revenue, has the lowest user sentiment. Apptopia's Review Intelligence tells us most reviews are left for Performance & Bugs issues. After updates, people complain about an increase in bugs that do not go away for a few days. They're also upset that many times downloaded content will not play without a WiFi connection.

Meanwhile, discovery+, which is generating the 2nd least amount of IAP revenue, has the highest user sentiment. People are mostly praising the combination of the content they love (which as we can see from the sheer user numbers, not everyone cares for) and the low prices. Key terms "low price" and "reasonable price" have positive impact scores of 6.4 and 5.0, respectively. Impact scores range from -10 to +10, measuring the impact that key term has on overall sentiment.

Curious about what the market share will look like once HBO Max and discovery+ merge into one app? The whole may be greater than the sum of their parts. If you'd like to create your own custom report for free, click here. If you'd prefer to get an in-depth look at more categories streaming entertainment apps, click the blue button below.