Letgo and Other Marketplace Apps Have Top Chart Staying Power 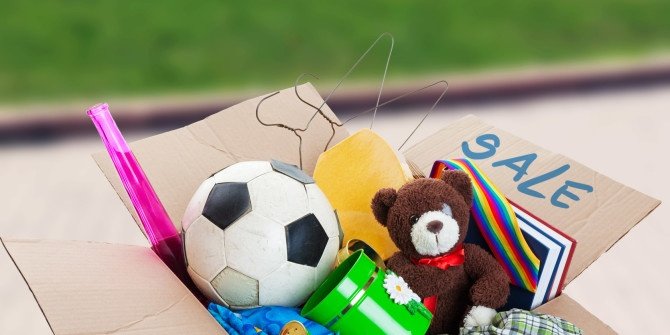 Marketplace apps, those enabling users to both buy and sell items, are prospering in the app store ranks. There is no secret sauce here. People like buying things for cheap and they also like the opportunity to make some side cash by selling their stuff. Tell them these apps exist and the downloads will come. Just look at eBay and Craigslist, both have had success for more than a decade.

One of the most successful marketplace apps to date is Letgo, which has reportedly raised $375M in its lifetime. The app had a tremendous number of downloads in the beginning of the calendar year but has come back down from eBay-like levels. With those downloads comes millions of monthly active users.

Even with a substantial user base, startups and really all companies, are expected to continue growing no matter what. This is why letgo recently launched housing listings. It also opens them up to new competitors such as Zillow.

Looking at our Q4 US retention leaders, letgo topped the Android apps list. Retention is hugely important, especially if downloads are subsiding. 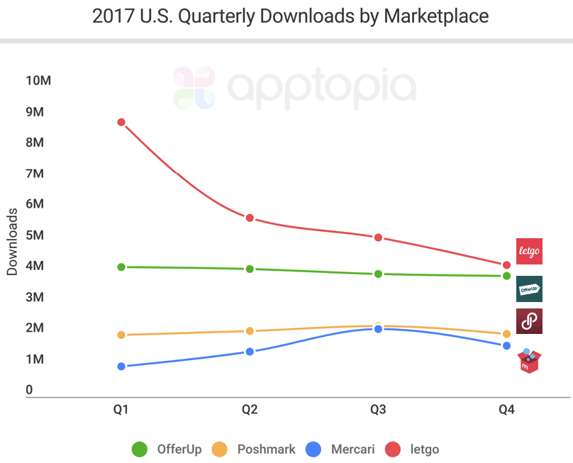 Letgo experienced a 56% decrease in downloads throughout 2017 because it started so hot. Nonetheless, all marketplace apps are seeing an increase in their users. All five of these apps typically rank within the top 10 in the Shopping category of both the App Store and Google Play. Previously, we have compared these newer shopping apps to the performance of brands and legacy apps. 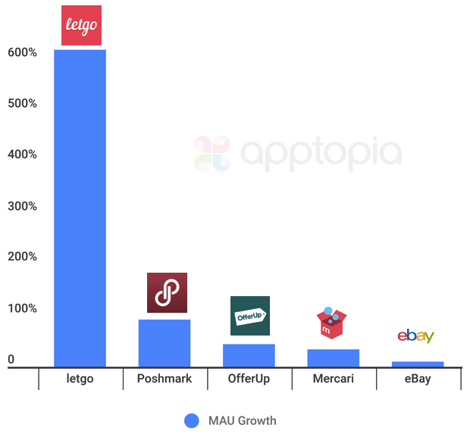 The male/female usage split of these apps is pretty close to 50/50 with the exception of Poshmark which skews 77% female. Another interesting demographic morsel is that out of these apps, eBay has the highest percentage of users aged 11-20, at 32%. This could be a very positive note for eBay moving forward if it’s captured a younger demographic and can retain them moving forward.