Lyft is on pace to surpass Uber in the U.S. 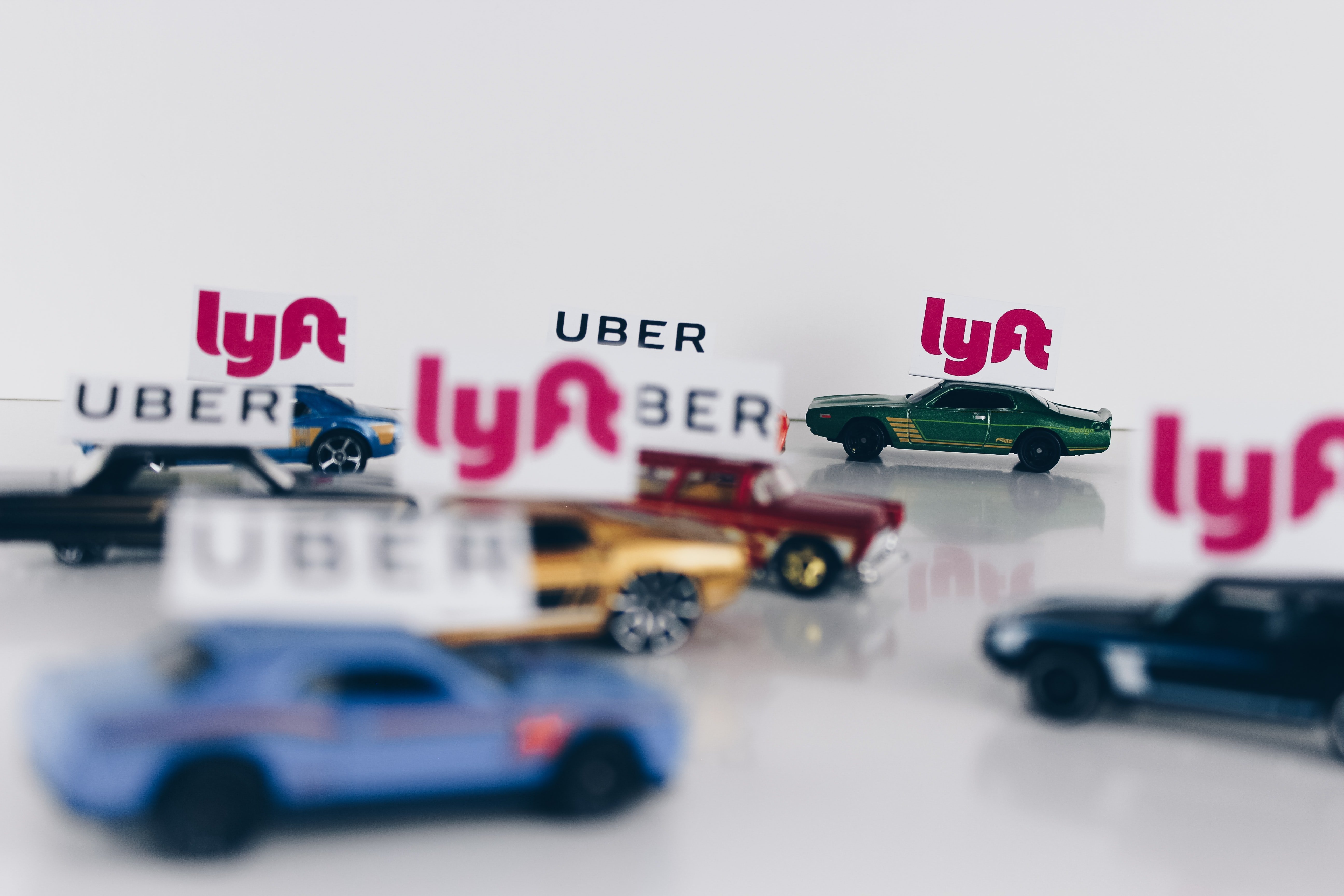 -- Lyft is on pace to surpass Uber in the United States.

-- We estimate Lyft's U.S. market share of daily active users (DAU) to be 49% while Uber remains the market leader at 51%.

-- Given the current trajectory, we forecast Lyft’s U.S. market share to officially surpass that of Uber’s in Q4 of 2020.

The Data Behind Our Statements

-- Both Uber & Lyft are each growing at an impressive clip of at least 2 million new downloads per month in the U.S.

-- However, Lyft is growing active users at a notably faster rate over the past 2 years due to a significantly higher retention rate. 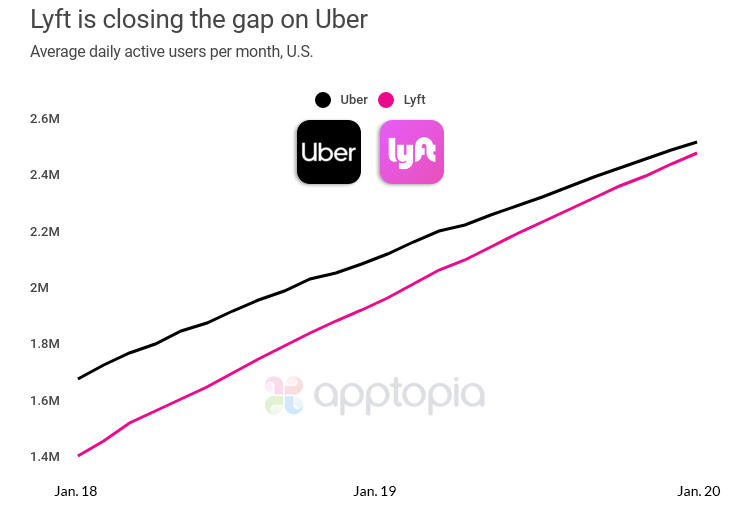 Monthly active users (MAU) and total monthly sessions share a very similar trend to the DAU image above. However, as it pertains to downloads, or net new users, Uber continues to outpace its competition. Lyft has averaged about 27% less monthly downloads than Uber (in the U.S.) over the past six months. Still, as you can see below, the gap is shrinking pretty consistently both in terms of downloads (net new users) and App Store rank (consumer visibility):

Now you are probably thinking, “How could Lyft eventually have more active users than Uber, if Uber is consistently getting more downloads?”.  It's a great question and it’s one we’ve asked ourselves quite a few times prior to publishing this research. Let's start by talking about advertising & paid user acquisition, as we believe it's a big part of the story. Thanks to both Uber & Lyft being public companies, we know their factual Sales & Marketing spend:

Keep in mind Uber operates in 60 different countries while Lyft is only in two. Still, the U.S. is Uber's largest market. Apptopia estimates 21-25% of Uber’s users are in the United States. Through this, we might infer that 25% or more of their revenue, and therefore 25% or more of their Sales & Marketing budget comes from the U.S. Well, 25% of $3.4B would be $850M, which is still significantly more than that of Lyft. We also know that in mobile specifically, users who are acquired organically tend to have higher retention and engagement vs. users acquired via paid acquisition. Trusted sources even show the following data:

-- Organic user retention is over 4% higher than paid acquisition*

We believe this is one key factor impacting Uber’s growth rates, relative to their download rate.

As we alluded to before, we believe Lyft is beating Uber in the U.S. retention game by a significant margin. Given the data we see today, we believe that if you have decided to keep the Uber / Lyft app after ‘day 30’, you likely will forever. Given that, if you were to compare day 30 retention for Uber vs. Lyft in the U.S., you would see: 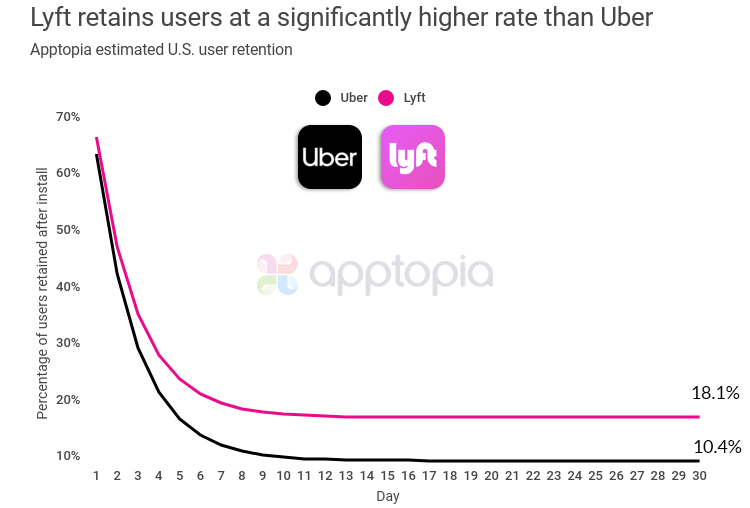 This is one of the single most important metrics in this entire research and so I want to explain in detail how we got here: 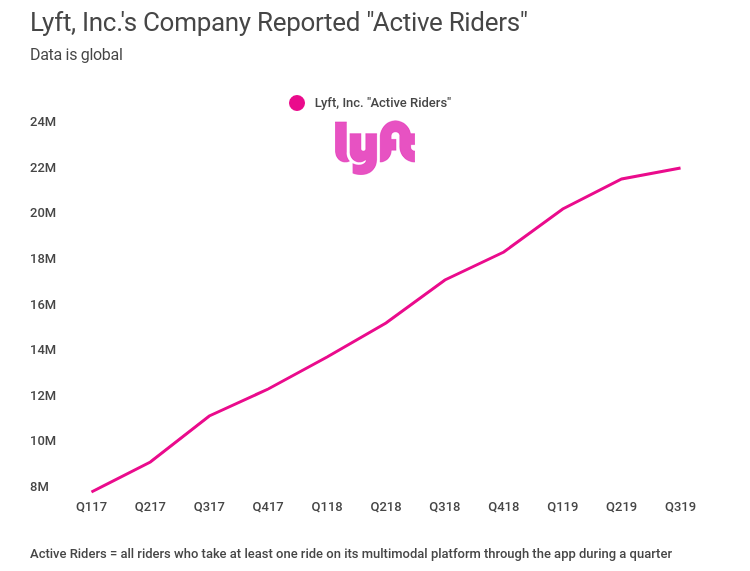 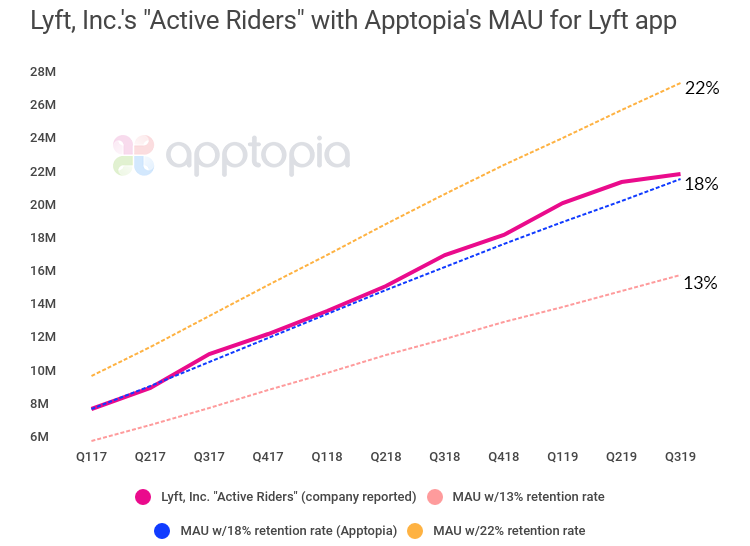 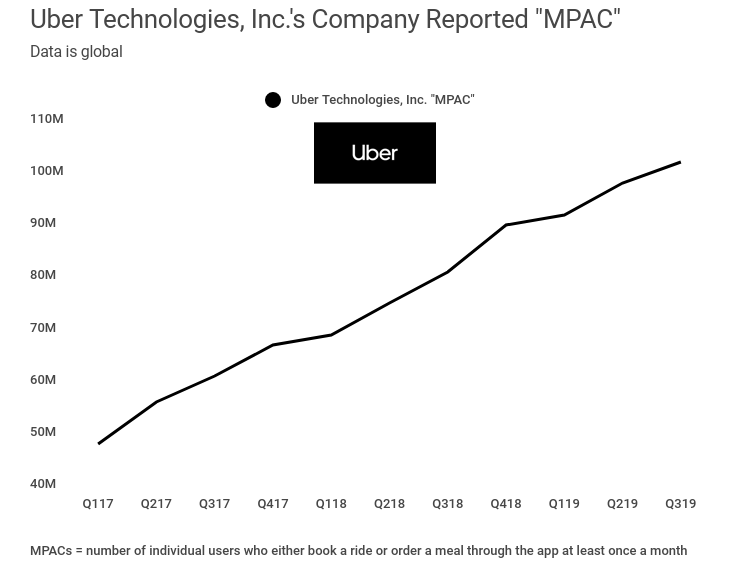 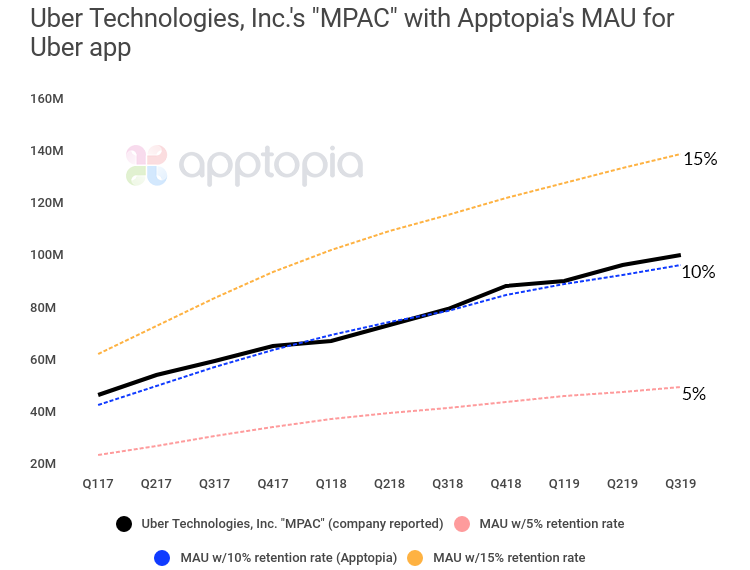 As you can see above, the Day 30 retention rates of Uber (~10%) and Lyft (~18%) are by far the closest fitting curves to Uber & Lyft’s publicly reported metrics.

Let me be clear that we do not claim to speak about revenue, costs, stock price, etc. These things are not our expertise. Mobile app data and the mobile app economy, however, are very much our expertise. And it seems pretty clear that in the U.S., Lyft is neck and neck with Uber’s ride hailing business. Yes, we are aware that in May 2018 Lyft itself said it believes it has 35% of the U.S. market share between itself and Uber. It is reasonable to believe their share of the market has increased in the 20 months since then. In fact, we forecast that Lyft should surpass Uber’s DAU in the U.S. in Q4 2020.

If we had to speculate on what the cause of this is (and we can not stress enough, this is now the opinion portion of this otherwise data-driven piece), here are some of our thoughts:

We plan to keep a very close eye on these two as 2020 continues to play out - but for now it seems that Lyft has snuck up faster than many expected. Strap in, it should be a fun year.