3 Ways to Win with Mobile Ad Campaigns for Sporting Events


If you’re a mobile marketer, you can look to World Cup advertising activity for inspiration on how to approach marketing around other major sporting events (Superbowl, BCS championship, March Madness). In our analysis of the performance of the Streaming Entertainment apps with World Cup coverage, three takeaways emerged. They can be applied to any app category promoting a product or service tied to the next big game.

1. Launching Ad Creatives specific to the event and earlier than the competition improved conversion and engagement at game time.

How do you build Awareness in a noisy marketplace? FOX Sports and FIFA+ launched World Cup Ad Creatives in September,  before any other apps. While the choice was a no-brainer for FIFA+, which exists to stream the World Cup every four years, it was prioritization that paid off for FOX Sports. September is already a busy month of big games for FOX Sports (MLB Division Series, NCAA and NFL Football kick-off). In order to advertise for each in-season league and plant the seed about the upcoming World Cup, FOX Sports increased Ad Creative Volume by 100% between August and September 2022, compared to a 16% increase for this period in 2021.

For three weeks, FOX Sports ran World Cup ads alongside no other Streaming app besides FIFA+. Its Market Share by Downloads increased by 17 points in the last seven days of the competition. 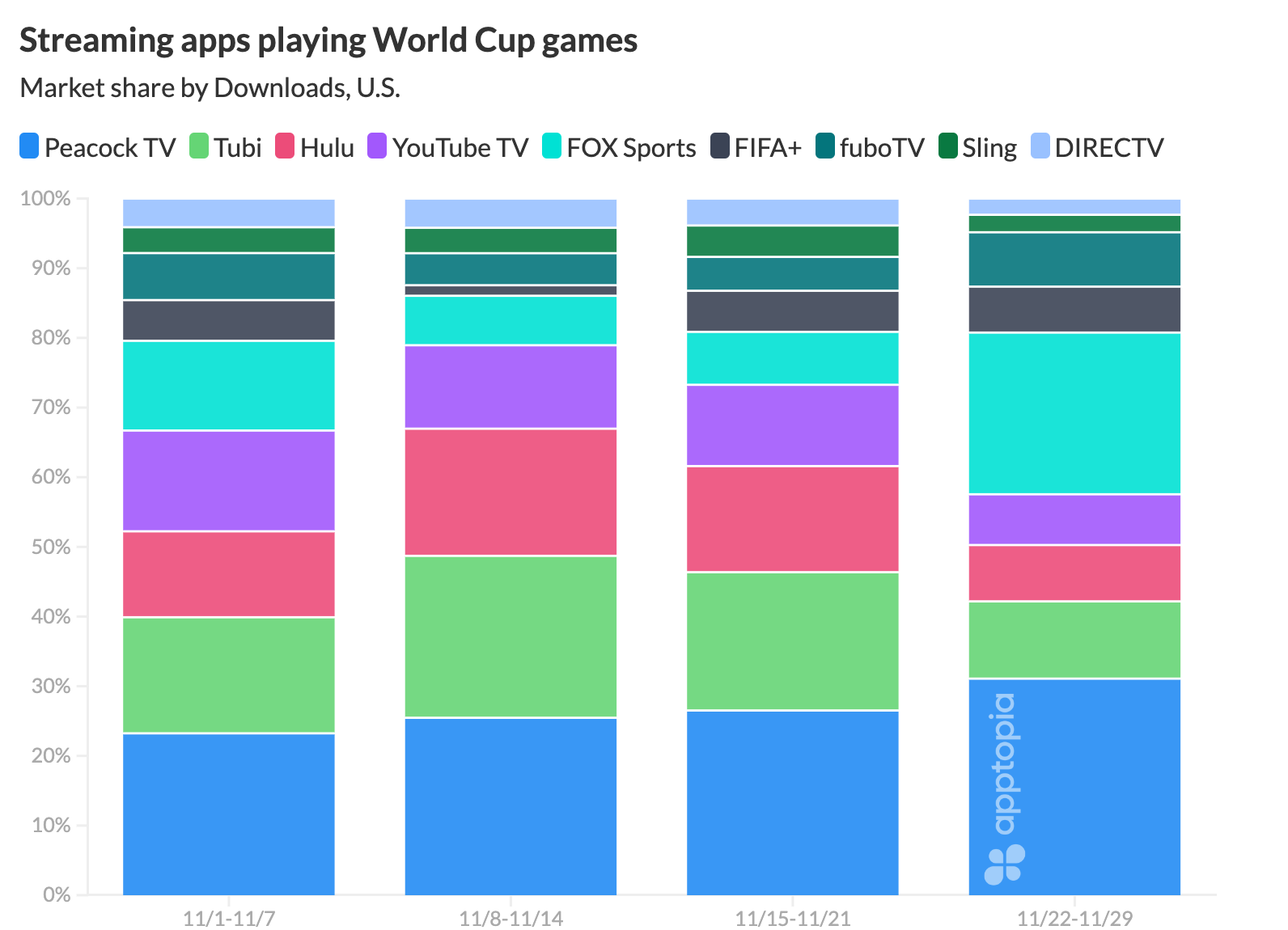 The apps losing the most market share, Tubi (-9), Hulu (-7), maintain a majority of Ad Creatives focused on movies and TV series. Why? It’s possible that Hulu is not allowed to advertise for the World Cup – despite the fact that Hulu TV Plus subscribers have access to the games – due to its partnership with ESPN, which lost streaming rights to the World Cup in 2011. Similarly, Tubi, owned by Fox, could also be limited to "stay in its lane" to let FOX Sports thrive. Tubi did start advertising a couple World Cup Ad Creatives after November 15, but it does not look to have converted a high volume of World Cup viewers – which  brings us to our second finding:

2. World Cup Ad campaigns launched only days before the first game look to have got lost in the noise.

Analyzing the apps that ranked in midfield reinforced the importance of Ad Creatives, start dates, and run time.

Above that line in the sand is Sling (21%) and Peacock TV (39%), which both stream NFL games but also invested in World Cup mobile ads. The timing of the ads differentiates the two. Peacock TV started running ads mid-October, while Sling started after mid-November. Fortunately for Sling, it did not go the way of Tubi (7% User Session growth) likely because its invested enough in sports-centric ad creatives, including Soccer outside of the World Cup, to be thought of as an option.

Notably, two of the leading Streaming apps for World Cup viewers, FOX Sports and Peacock TV, increased Twitter ads targeting iOS users in November. FOX Sports went from Twitter ads representing 9% of all iOS ads in October to 63% in November, and the initial increase in allocation toward the Ad Network match the days that Elon Musk assumed position as CEO.

More interesting is that Peacock TV minimized Twitter ads as Elon took over– from 17% in October to 1% – but reversed course leading up to and during the World Cup games.

Ironically, the peaks and valleys of both apps’ daily downloads look similar in the first half of November despite reverse strategies. We can only assume that Peacock TV interpreted a signal in its own performance – or saw Elon Musk’s tweet about World Cup coverage on Twitter – to inform its decision to invest on the Twitter network again. 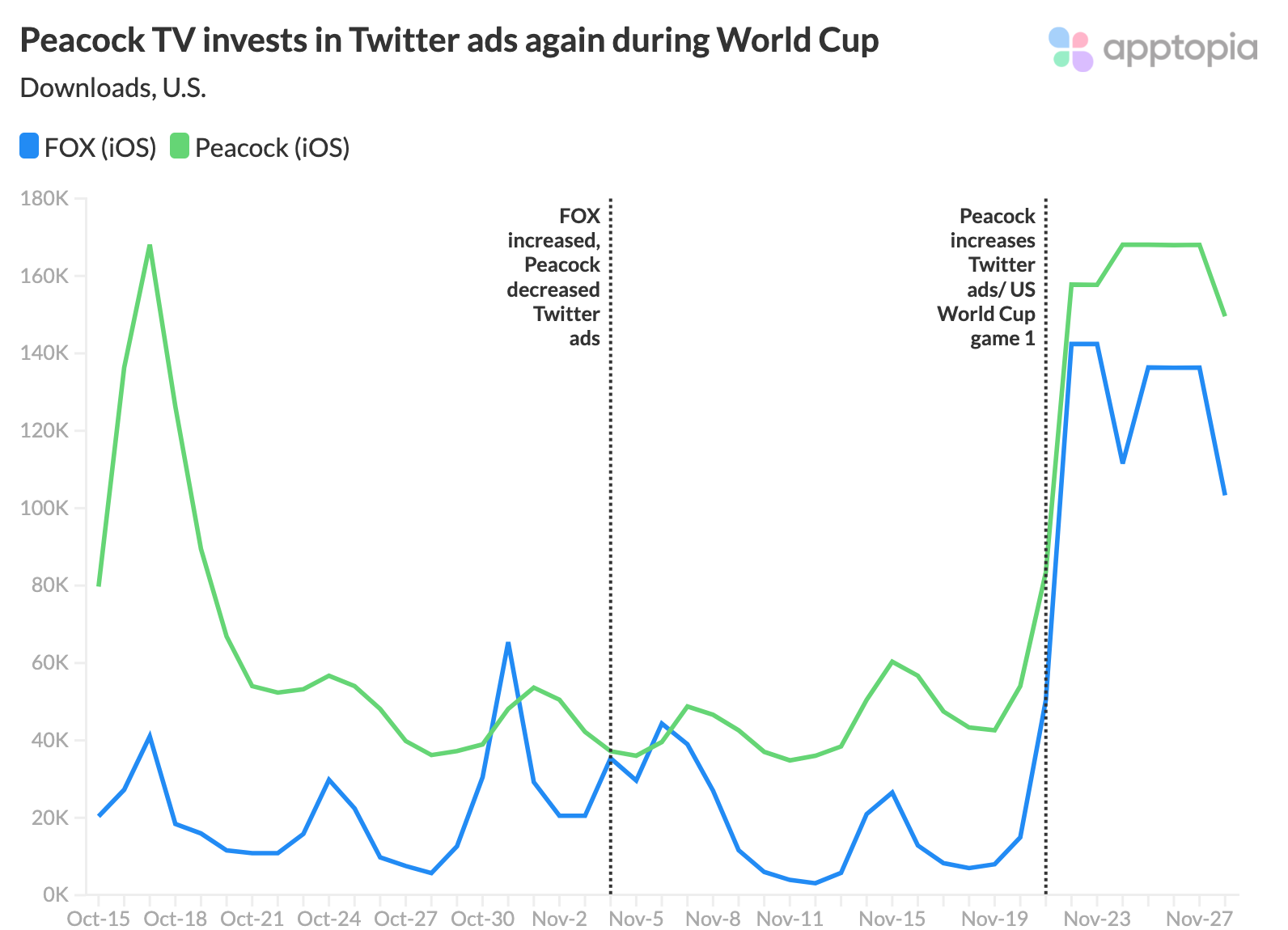 In conclusion, if you’re considering mobile ad campaigns for upcoming sporting events, the playbook to win is straightforward: Prepare to be first in your market to start your ad campaign; feature the sporting event in your Ad Creative about your product/ service; and place ads where conversation about the game is happening. For businesses avoiding Twitter advertising at the moment (our data shows a 25% drop in Twitter mobile advertisers over the last four weeks), we have seen high impressions for sports-related Ad Creatives on traditional media outlets and sports blogs as well.