Apple’s newly redesigned App Store launched late September to much fanfare and anticipation from developers and publisher alike. One of the most touted features were the daily spotlights, featuring both an app and game of the day. With a serious lack of transparency, there are a lot of unknowns in the mobile app economy. As a developer, what does getting featured do for you?

At Apptopia, it’s our job to give you the answers to your questions and today is no different. We studied 30 days of featured apps and games to give you the insight you need. There’s a lot to take in from the chart below but you’re going to want to keep reading afterwards because there’s much more insight and surrounding information that you’ll find valuable. 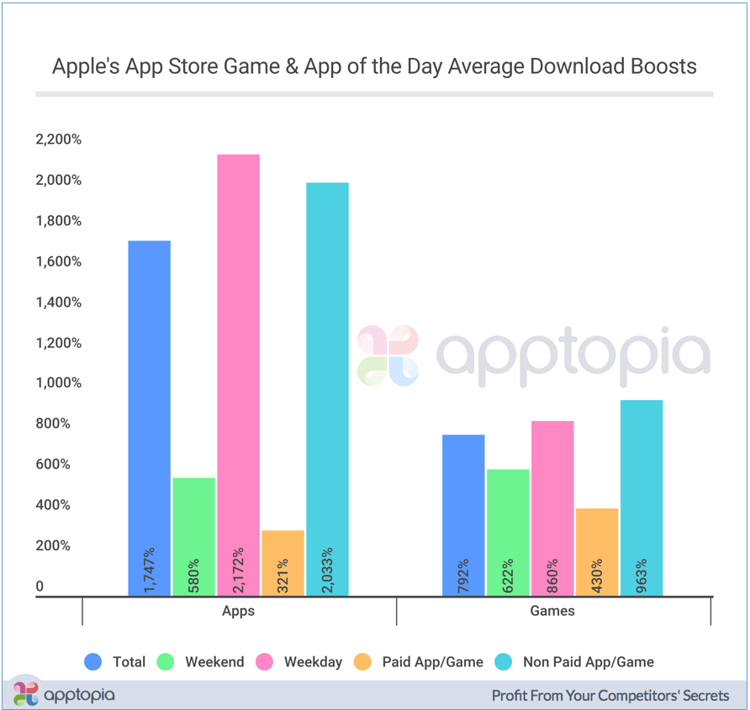 Key things to know when looking at the chart:

Established apps receive less of a bump and this isn’t a shock. Starbucks is an example where Apptopia estimated it only received a handful of downloads more than the previous day of being featured. Not only is everyone aware that Starbucks has an app, but chances are high that the majority of people who would want to have the Starbucks app already have it.

Apps that were already ranking within the top 20 of their respective category before being featured, only received an average download boost of 44%. For games ranking within the top 20 of the Games category, it was 37%. This begs the question of whether or not Apple really cares about discovery for independent shops or lesser known apps. Apptopia Founder & COO Jonathan Kay dives deeper into that question here.

Each day we analyzed, the App of the Day was listed before the Game of the Day except once on the 24th of September, where the paid game Morphite was listed first. We attribute this to Apple experimenting. This did not give Morphite a better performance by comparison. Something else interesting is that on Apple’s ‘Today’ tab, the App of the Day was never the first thing listed. You have to scroll to see it. There was always some piece of content first with another app or group of apps to download. Weird.

Every day we analyzed, the app and game of the day were always directly one after the other with the exception of one day where there was a piece of content between the two. Again, we attribute this to Apple experimenting with placement to get a better feel for user interaction.