To stay informed on the rapidly evolving situation that is COVID-19, people are looking for trusted sources to provide national and local updates. This week, News Break and SmartNews, two news aggregation apps that allow you to easily access both your local and national news, have reached all-time highs for daily downloads. 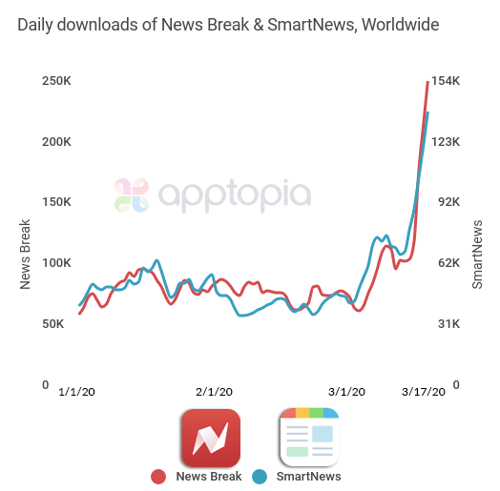 SmartNews and News Break first broke their existing records on March 14 and 15, respectively. Each day since then, the apps have continued to beat their previous numbers. Yesterday (March 17), their biggest day so far, News Break was installed 225K times while SmartNews was installed 142K times. If you compare these numbers to their average daily downloads in February, News Break’s downloads are up 214% and SmartNews’s are up 222%.

It's not just the aggregators we're looking to for updates and information. Most notably, The Washington Post has also been taking advantage of the climate, recording its highest ever number of downloads and daily active users (DAU) this week. WaPo downloads are up 76% since Jan. 1 and DAU is up almost 23% — as for the The New York Times and The Wall Street Journal, downloads are up about 58% and 39%, respectively (also since Jan. 1).

CNN and FOX News are on the rise too. These two saw a surge in downloads and engagement earlier in January due to U.S. political events of interest, and now they’re rising again with coverage of the virus. Comparing the average number of daily downloads in February to yesterday's (3/17) record install numbers, CNN and Fox are up 244% and 127%, respectively. 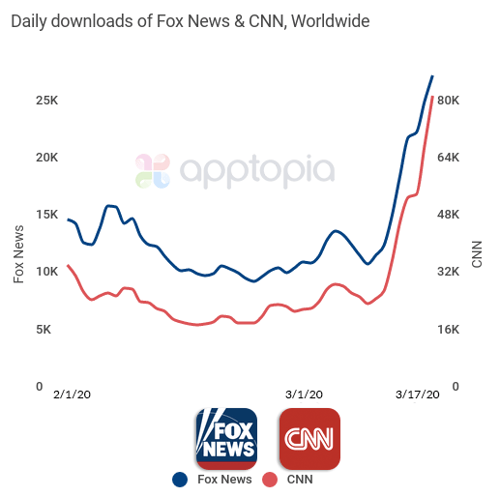 Looking at the Y axes of these charts, we see that news aggregation apps are of much higher interest than primary sources. Publications like CNN or The Washington Post must navigate the aggregation landscape and evaluate which aggregators are worth it to be included in, and which ones aren't. Are the additional eyeballs enough to justify not having that direct relationship with the reader?