Ovulation-tracking apps increased IAP revenue by 230% this past year

The top free ovulation apps collectively increased in-app purchase (IAP) revenue by about 230% this past year. Ovulation apps are those that serve as digital period calendars, fertility trackers or contraceptives— some work as all three. In an age where we still have to purchase tampons on our own, these tools could come in handy. 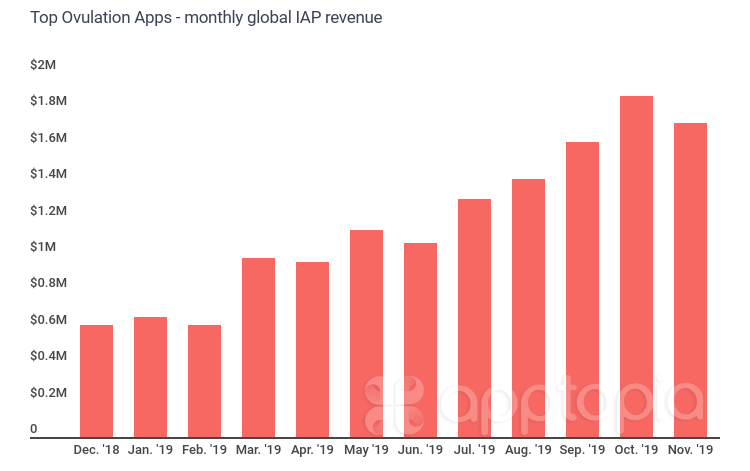 While the market’s app downloads and user engagement metrics were less than impressive this year, revenue is expected to keep growing. According to a new report by Grand View Research, Inc., the global women’s health app market size is expected to reach $3.9 billion by 2026, and ovulation apps are responsible for a big chunk of that.

Flo, the leading ovulation app worldwide, is currently #2 in the Health & Fitness category of the iOS App Store. It was downloaded about 2.6M times in November and user engagement is back on the rise after a couple months of decline. Period Tracker is not far behind with about 2.5M total downloads in November.

Not reflected in the above chart are the health apps that have adopted cycle-tracking features in addition to their core functionalities. These include Fitbit and the Apple Health app, which comes pre-installed on every iPhone. Apple announced their cycle-tracking feature just recently in September.

With major brands like Apple embracing this trend, we may notice a marked shift in the prioritization of "femtech" products. This is good news for creators of apps like Moody Month, an ovulation and hormone tracker that goes far beyond the traditional. According to Forbes, the app “seeks to educate and empower women to listen, learn and respond to our hormonal cues and patterns on a daily basis.”

Moody Month launched in February 2019 in the iOS App Store. It’s amassed 108K downloads so far and about 18K people actively used the app in November. While it hasn’t exploded onto the scene yet, its existence alone may inspire a new flock of apps dedicated to more holistic approaches to women’s mental and physical health.