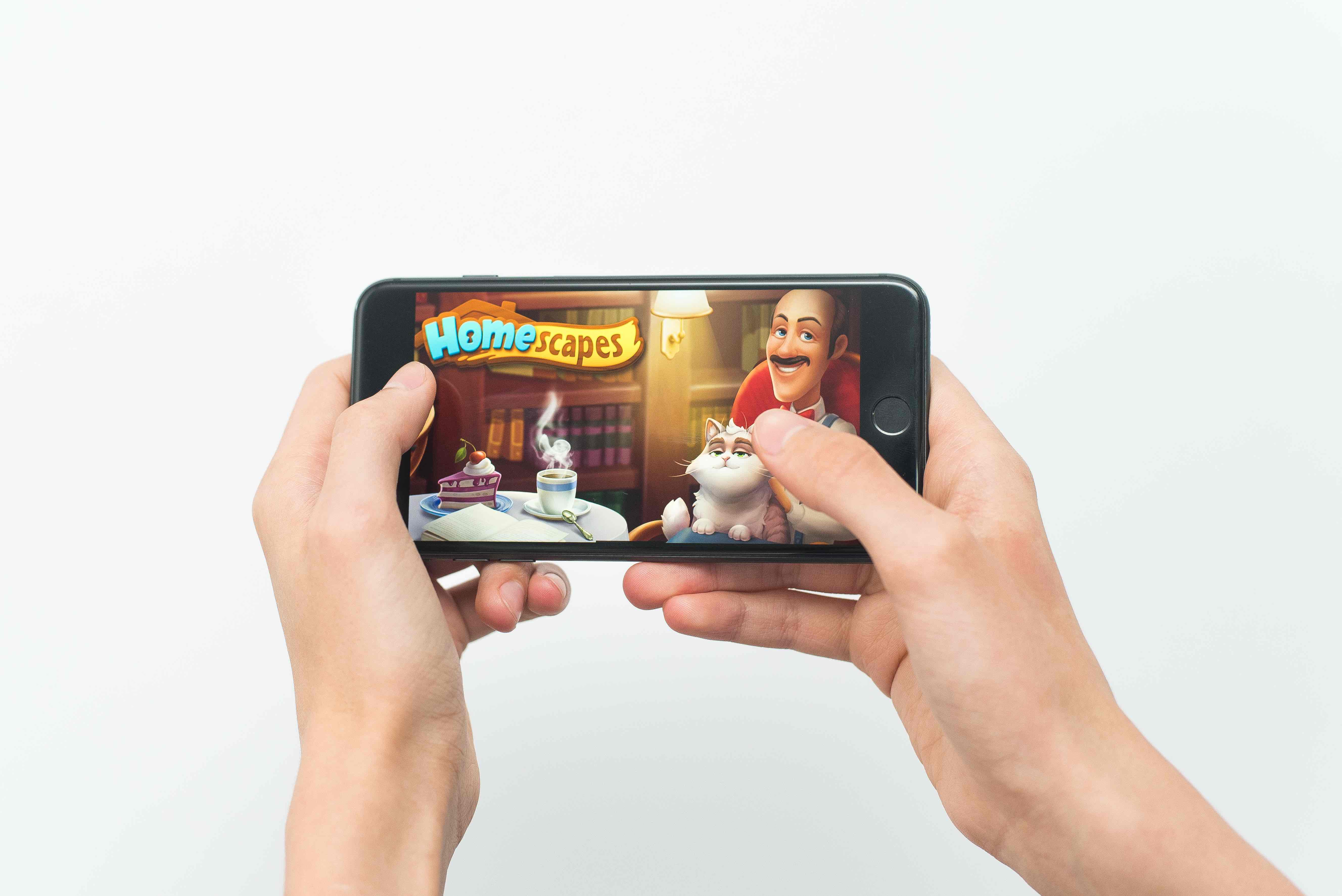 Puzzle poised for success in 2021

Puzzle and Strategy were the two highest grossing games categories in the US in 2020. Puzzle performed better on iOS, while Strategy performed better on Google Play.  As we navigate the post-IDFA world, we expect both of these categories to continue to bring in the biggest bucks. However, Puzzle games, with their slightly simpler gameplay, may have the potential to overtake Strategy in 2021. 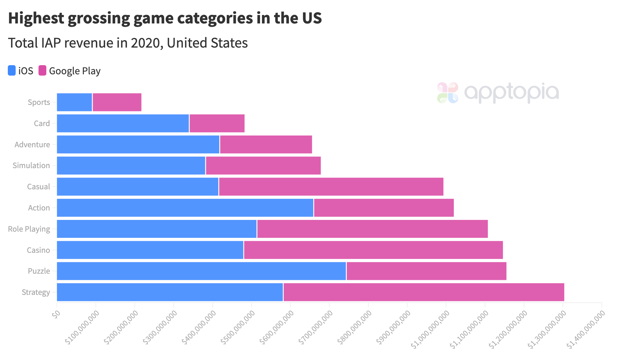 What makes the Puzzle category so in-app purchase friendly, you ask? Unlike its more hardcore friends (4x/casino/RPG etc.), this category does not rely on a small percentage of extremely high spenders. Instead,  Puzzle games have a broader appeal, making them easier to advertise for. With a larger and likely more diverse user base, these games can gross the most even with lower ARPU (average revenue per user).

Get insight into 5 games of your choosing

I like to think of Puzzles as math equations. There is generally one solution, or very few solutions, available to progress in the game. Once you understand how to perform a specific action, the game becomes trivial. Strategy games, on the other hand/for reference, can be tackled using various— you guessed it— strategies. You may have to alter your tactics as new or opposing elements are introduced.

The line between Strategy and Puzzle blurs when Strategy games include puzzle levels, or when Puzzle games try to make their gameplay more challenging. And this “line blurring," of course, is not limited to these two categories. For example, the popular match-3 game (think: Candy Crush Saga) is currently divided in the app stores between Casual and Puzzle. But if a match-3 game also has character development features, it will be labeled as Puzzle RPG, giving it another dimension and more potential for discovery.

For the purpose of our analysis below, we will focus on games you can find in either app store's Puzzle category— just keep in mind that some of these may belong to several categories. The supposedly simpler mechanics of Puzzle games, plus the big names controlling the space, have me believing this category is going to become even more dominant in 2021.

The highest grossing Puzzle game in 2020 in the US was Homescapes by Playrix. It generated $170 million in IAP revenue in the US and $470 million total 🐦.  In the game, players must solve match-3 puzzles to renovate and restore a mansion. Playrix is also responsible for Gardenscapes and Fishdom, two of the other highest-grossing titles here. Gardenscapes actually beats Homescapes in IAP revenue globally, having generated $550 million total. 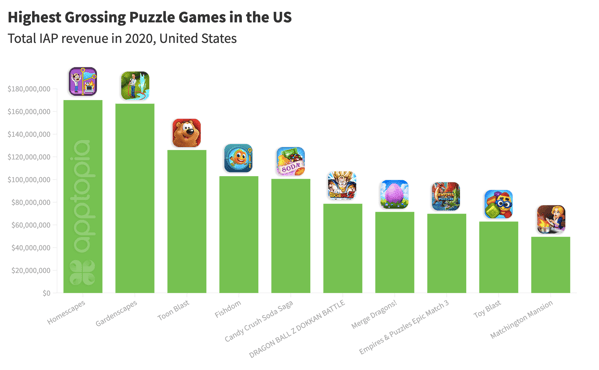 The most downloaded Puzzle game in 2020 in the US was Tangle Master 3D. This "mind-teasing" game is a straightforward Puzzle, in that it has easy-to-play controls and limited moves per level. Its simple gameplay makes it an obvious top contender. Plus, it's a title from mobile gaming giant Zynga, so it doesn't lack marketing power. Zynga's Go Knots 3D and Harry Potter: Puzzles & Spells, while not shown below, also landed among the top 50 Puzzle games (by both downloads and IAP revenue). 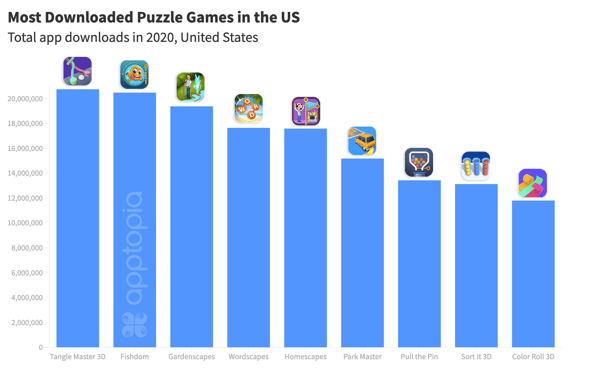 We would also be remiss not mention a specific type of Puzzle that is seeing success: merge games. "Merge" refers to the mechanic that lets players combine items to obtain items of higher quality (E.g. 1 jewel + 1 jewel = 1 super jewel). This sub-genre was popularized by Gram Games in their creation of Merge Dragons. Now, the merge mechanic is considered a strong alternative to classic puzzle cores, which big publishers, like Playrix, already have on lock.

Metacore (backed by Supercell) is seeing a lot of success as of late with their merge game, Merge Mansion. It is a merge-2 game (players can combine two different objects) that unites the ‘Puzzle & Decorate’ meta game with the puzzle-like game board. While I believe it is still in soft launch, the app managed to increase IAP revenue 109% from December to February. 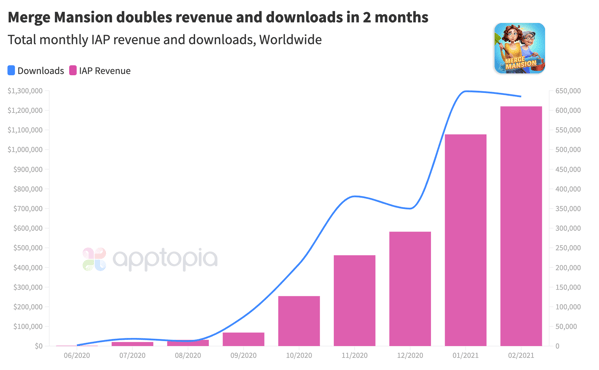 ➡️ Did you see our analysis of Top War? It’s a strategy game with a merge core.

The Puzzle category is off to a strong start in 2021. In February, in the US, the Puzzle category was the #1 highest revenue-generating category out of all categories on iOS, not just games. It was #5 overall on Google Play. In both stores, the category was responsible for 250% more revenue than the average category. We expect Puzzle to at least keep its foothold in the iOS store.

Playrix, the publisher responsible for the top games in the category, will continue to do well, but its growth may slow. In the post-IDFA world, developers will not be able to rely on sensationalized/misleading ad creatives for lower CPIs and higher CTRs. Instead, they'll need to re-focus on mechanics and differentiation, and return to more traditional advertising.  This may actually help King, who Playrix unseated as the top dog.

The Puzzle market is a daunting one for new entrants, as it's dominated by some of the biggest names in the industry. Games with large and stable DAUs will continue to win, as they already know what works and who to target. However, not all hope is lost for newbies. Innovative developers, willing to back their product up with a strong marketing strategy, should do well. Given their recent success, merge games will likely make up the majority of new entrants. They will also likely be the targets for M&A.

If not merge games, what are you betting on?

Get insight into 5 games of your choosing