Spotify, Pandora and Soundcloud dominate the Music & Audio apps market, leaving little room for YouTube Music and Amazon Music to compete, according to our Brand Relative App Growth (BRAG) Index. Spotify led the category in downloads during Q4 and Q1, followed by Pandora, Soundcloud and – to the surprise of our consumer survey research – Shazam.

The Top 20 Music & Audio apps, as a category, had the third highest brand funnel scores, behind Food & Drink apps and Streaming Video apps. In other words, consumers are aware of most apps in the market and express interest in downloading one or more of the music streaming services. The right side of the BRAG Box below shows the apps with the highest consumer awareness and “intent to install”. The difference between the Leaders and the Blushers is the app’s ability to convert that intent to actual installs at the end of Q4 and Q1. 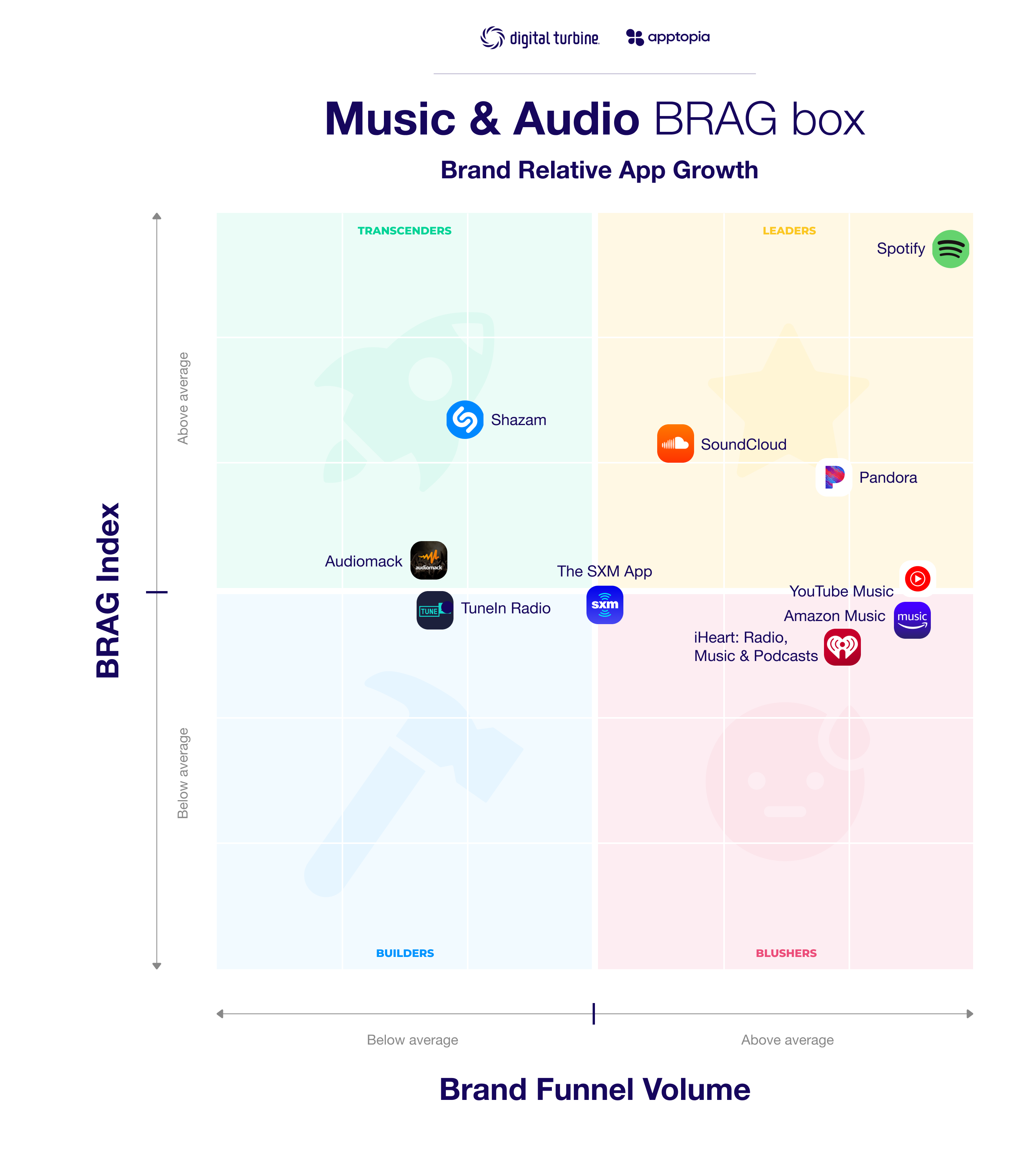 User acquisition in the Music & Audio apps market may be more impacted by an app's functions and features, compared to other categories studied in the report. After all, we know content is king when it comes to entertainment. But a majority of the well known brands in the right side of the BRAG Box - Spotify, Pandora, YouTube Music, Amazon Music and iHeart Radio - offer largely the same content. Consumers are then more likely to be loyal to one, and pay more attention to the platform’s UX and technology to make that choice.

We also saw product-led growth drive user acquisition for lesser known Music & Audio apps, Audiomack and Shazam. Both apps outperformed the strength of their brand funnels and were the Transcenders of this category.

Audiomack had 1% awareness and even less intent to install, but its user experience and available content is unique compared to the better known brands. Audiomack describes itself as “youth-driven” and “artist-first”, having embraced a creator economy model and social features for fan communities around independent artists. In Q4, Audiomack built a new feature for fans to buy “support badges” for their favorite artists, which generate revenue for the artist and personalize a fan’s profile. Audiomack also did an integration with Linktree, so creators could embed playlists and tracks from Audiomack to their Linktree pages for their followers on Instagram and TikTok.

Shazam was acquired by Apple in 2018, but if YouTube Music and Amazon Music’s placement in the BRAG Box tells us anything, it’s that having a parent company with a strong brand funnel does not mean user acquisition comes easy. Apple also leaned into product development and product placement via integrations. With the launch of iOS 14.2 in Q4 2021, Apple added a Shazam toggle to the Control Center on OS devices to allow for easier access – and discoverability outside of the App Store. Feature enhancements including content discovery for concerts, TV and movie recognition, plus integrations for Spotify and Snapchat, expanded Shazam’s network and relevance within the music streaming ecosystem.

Download the full BRAG Index report at the link below for more stories about product-powered growth.