Quibi, the new mobile only streaming video on demand app, has been installed 1.15 million times in 7 days. The app has only made a little more than $3,000 through in-app purchase revenue but it is making money from advertisements and most people are smartly taking advantage of its generous 90 day free trial.

About 87% of the installs are from the United States. Canada comes in next with around 6%. The downloads are pretty evenly split between iOS and Android users. 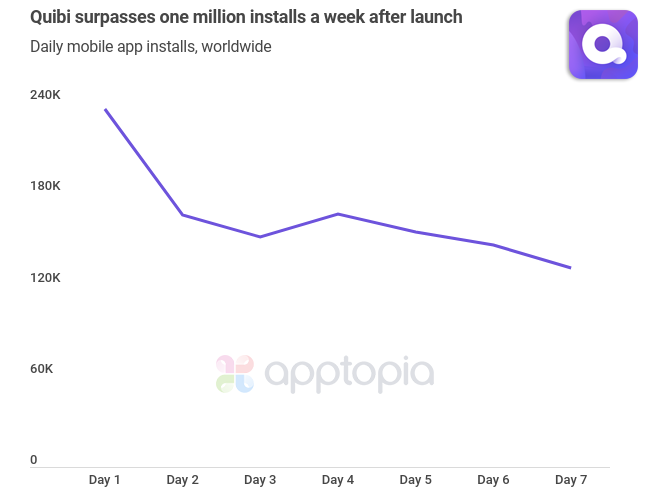 One week after Disney+'s launch, it was installed 12.5 million times and the app was largely only available in the United States, whereas Quibi has launched internationally. There is obviously a massive gap in performance here but Disney+ isn’t the right app to compare to Quibi because there is no perfect comparable for it. Still, it's what's going to happen because Disney+ is the only other SVOD app with a very strong financial backing and massive marketing hype to have recently launched.

Get data like this sent straight to your inbox

Quibi is unique in its format (episodes in 10 minutes or less) and unique in its content. Most other SVOD apps launching are kicking off with some content you know and love. Content you already know and love was the main driver for Disney+. Quibi made the bold move to launch with original content only.

I’ve also seen Quibi be compared to HBO NOW’s launch but HBO NOW launched in a completely different world. In 2015, mobile was no where near where it is now and no one would have ever dreamed up a mobile only SVOD app backed by this much talent and money.

Still, Quibi was likely hoping for a better launch. The highest it hit on the U.S. App Store Top Charts was #4 Overall on launch day. It's no secret that when you're launching a big app like this, you expect to hit the #1 Overall spot. The Coronavirus has definitely had an impact. It's clear from using the app that it's best used while commuting to work, which is not happening for many people right now. Stay tuned as we continue to track Quibi's progress along with the rest of the streaming video industry.