Thursday, April 23, marked the start of the holy month of Ramadan. Normally, Ramadan is a big boon for retailers, as people purchase special outfits and other celebratory items to prepare for the month ahead. However, after three years of steady growth, mobile retail is now slowing (by measure of new installs and app sessions) in countries where Ramadan shopping is most popular. This is likely the result of social distancing efforts, which are altering the ways people prepare for and celebrate the holiday. 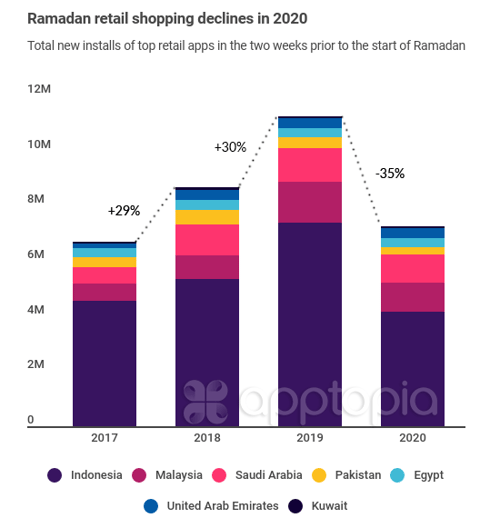 We built a market of the 30 top retail apps across regions where Ramadan is widely celebrated. Then, we examined the performance of those apps in the two weeks leading up to each Ramadan from 2017 - 2020. (The two weeks leading up to the holiday are typically the most popular time for Ramadan sales and purchases.) This year, new installs and sessions of these apps fell 35% and 16% YoY, respectively.

Indonesia, which is home to the largest Muslim population in the world, saw pre-Ramadan installs fall 43% and sessions fall 20%. Shopee, the country's most popular retail app, is a perfect example of the decline. Month over month, the app’s grown, but compared to last year’s Ramadan prep, installs are down 41% and sessions are down approximately 14%. Other popular retailers in the country, like Lazada, experienced the expected drop in new installs, but were still able to grow sessions. If sessions rise while new installs fall, it's a sign of customer loyalty and improved user retention. 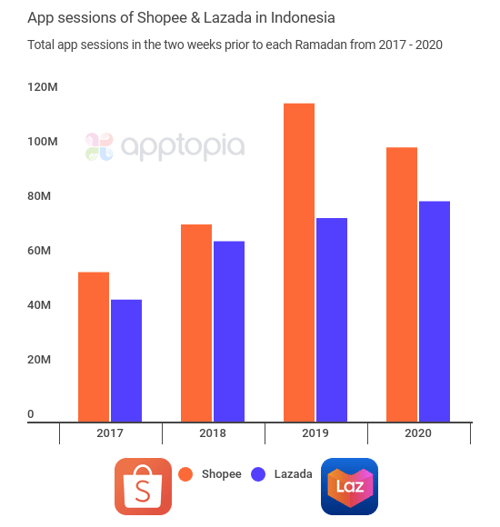 The other regions we looked at, including Malaysia, Pakistan, and Saudi Arabia, followed a very similar downward trend. The only exceptions were Egypt, Kuwait, and the United Arab Emirates (UAE). For those countries, it looks like Amazon may have been a driving force in their continued growth.

In the UAE, Amazon launched on April 30, 2019, just ahead of last year’s Ramadan. They acquired and replaced Souq.com, the largest e-commerce platform in the Arab world. Now, Amazon leads in the country with the highest number of app sessions and daily active users (DAU) out of all other retailers (chart above: noon, Wish, SHEIN, Namshi Fashion). App sessions are a powerful indicator of potential sales, as people are more likely to be making purchases if they're frequently opening the app. 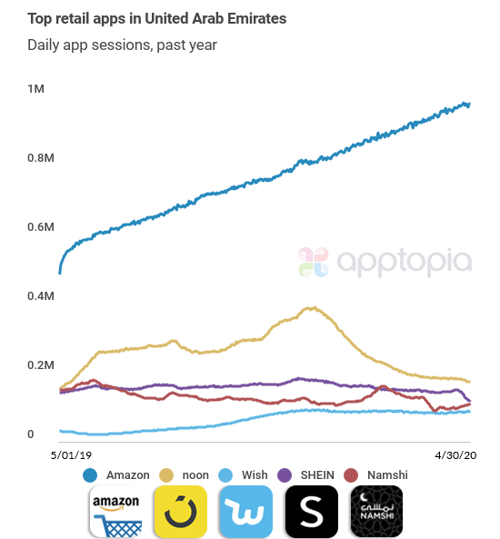 Egypt's growth - and Amazon's involvement in it - is particularly interesting because the country's retail apps actually saw a decrease in new installs (like the rest of the market), but an increase in app sessions. Amazon, of course, was one of the apps that consistently grew sessions there YoY. The app increased pre-Ramadan shopping sessions in Egypt 85% YoY and 50% since 2017. Meanwhile, popular apps like OLX Arabia and Souq.com experienced significantly less sessions this year.

Amazon was the #1 most used retail app for pre-Ramadan shopping in Egypt, Kuwait, UAE, Saudia Arabia and Pakistan. The company's ability to grow and dominate in spite of market conditions, suggests a potential shift in Ramadan retail purchases. People may continue to rely more heavily on Amazon over other retailers in the coming years, even as social distancing comes to an end.