The “creator economy” has taken off. It’s nothing new, there’s just nomenclature assigned to it now combined with more companies creating tools for creators to leverage. Creators can be anyone, they just need the availability of an audience. This is where platforms like Instagram, Twitter, LinkedIn, Clubhouse, Twitch, YouTube, TikTok and many more come in. They all provide a platform for both the creation and consumption of digital entertainment.

While creators/influencers can generate revenue from selling swag and offering other items to fans off-platform, the platforms are increasingly trying to get creators to monetize directly through them so they can take a cut. This is done by either accepting tips, getting a slice of advertising revenue or both. Here’s a look at the top 37 apps that creators host their profiles on, broken down by grouping. This chart is interactive! Click on the borders of the groupings.

As you can see above, the ‘Traditional’ grouping is still receiving the highest number of new installs, but TikTok is the single largest item in the chart. What's more interesting is that many of the apps in the ‘Short-Form Video’ grouping only recently gained popularity. They originated in India after the country’s ban on TikTok on June 30th, 2020. This created a void which several apps have filled. Another fun nugget; both TikTok and YouTube are estimated to generate more IAP revenue this May than any month previously, with $61M and $47M, respectively.

Top story platforms grow IAP revenue 50% YoY in May
As a grouping, these apps have also grown IAP revenue 15% over the past six months. This makes it the fastest growing segment of the creator economy in that time period. In fact, since January 2018, the grouping of seven apps [Webtoon, Dreame, GoodNovel, Webnovel, Tapas, Radish, Wattpad] has only once had two down months of revenue growth in a row. The steadiness is a thing of beauty. 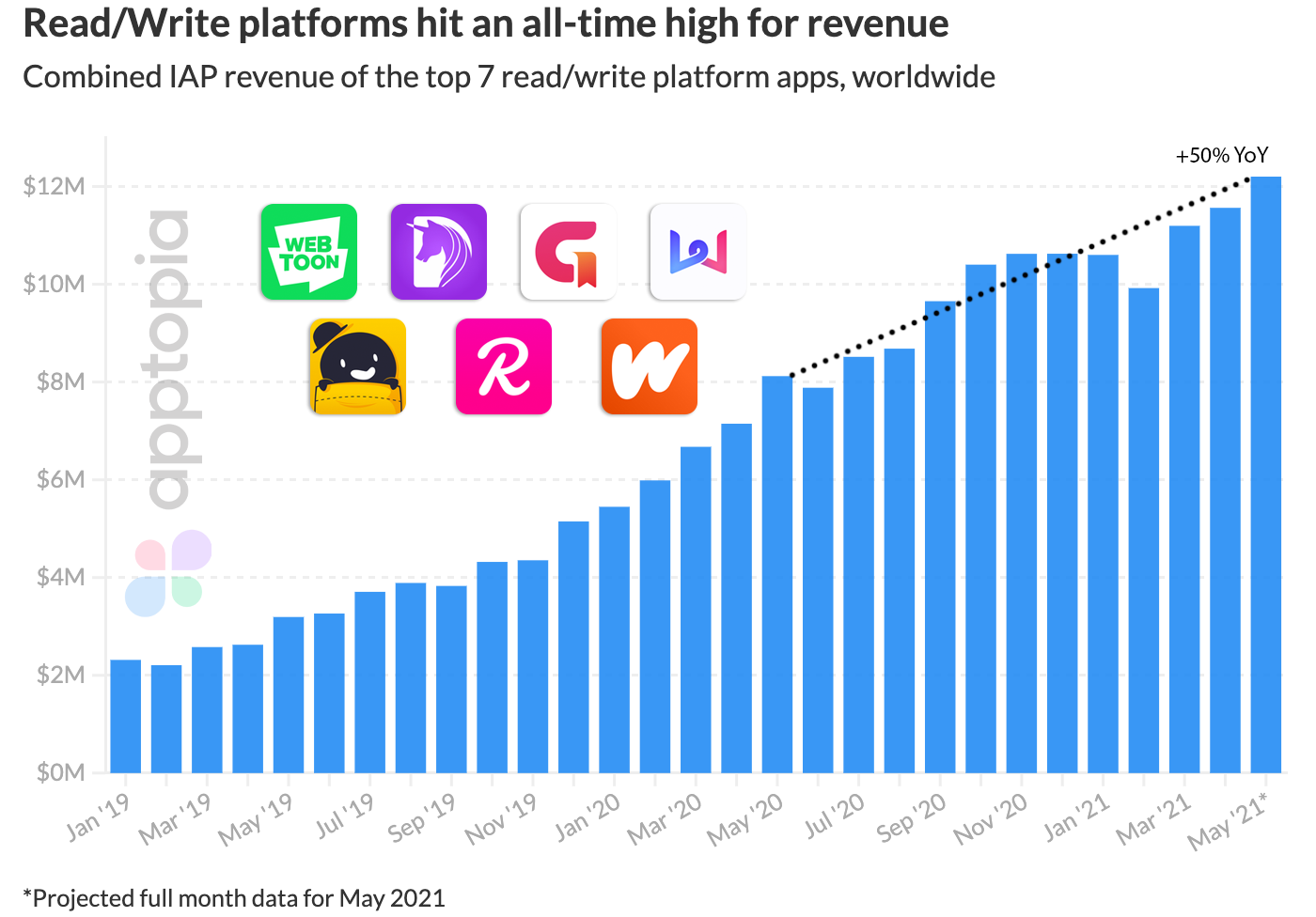 What are story platforms? They are apps that enable creators to write novels or comic books where fans can follow and read their work. To get paid, creators can choose to lock their content. Fans will then need to spend their in-app currency (coin system) in order to unlock it. Some apps also work with subscription models and share revenue with creators.

Since January 2020, the combination of Webtoon and Dreame have accounted for 56.3% of the grouping's total IAP revenue. Webtoon still creates about 10% more of the revenue than Dreame though. If you are looking to understand market share by downloads, see the above creator economy chart and click into the purple section titled "Read/Write."

Earlier this month, Wattpad was acquired by Naver, the owner of Webtoon. Naver said that Webtoon is "the largest digital publisher in the world" and that combined with Wattpad, the two boast 166 million monthly users across web and mobile.

During the pandemic, many digital products saw increased usage such as mobile games and streaming apps. These read/write apps were no exception, seeing DAUs increase 29% March 2020 through June 2020.

While the United States is the biggest single market for all seven of these apps, the second largest market for all of them are either Southeast Asian countries or Brazil. This post is just scratching the surface of these apps. You can take the next step yourself by clicking the button below.