Superstores and wholesale retailers saw strong growth in downloads and engagement in 2020. We attribute this to consumers being especially focused on affordability and bulk buying this year. You can learn more about this consumer trend, and all the retail performers who benefited, in our joint analysis with Semrush.

In this blog, we're taking a close look at Sam’s Club, Costco, and BJ’s Wholesale Club, the three most popular wholesale retailers in the US.  All require a membership card, and all have an app. In 2020, in the US, the Sam’s Club app was downloaded approximately 9.6M times, Costco was downloaded about 4.9M times, and BJ’s about 3.1M. 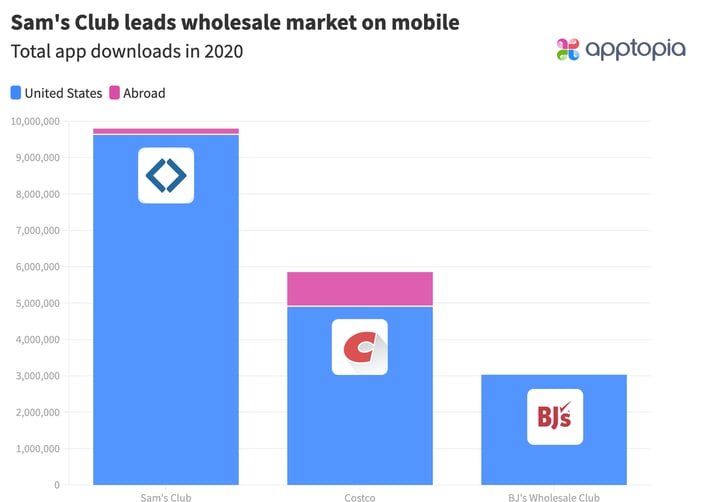 Your first thought may be, “duh.” Costco has the most physical stores worldwide, but Sam’s Club has the most in the US. So, of course the Sam’s Club app would be attracting more users here. I, however, would argue that there’s more to the story. The difference in US stores between Sam’s Club and Costco is marginal (~9%) compared to the difference in their 2020 app downloads (~65%).

So, why is Sam’s Club outperforming its closest competitor on mobile? First, I should note that Sam’s Club is a subsidiary of Walmart. Having that backing can’t hurt. Second, the Sam’s Club app appears to have implemented a series of updates, which improved the user experience, and made for a more pandemic-friendly shopping experience. As a result, Sam’s Club has the highest percentage of positive user reviews over the past 365 days, about 77.6% compared to 26.8% for Costco.

To dig into this further, I visited the version history and review history of both apps. With Sam’s Club, I saw that people were continually praising the new “Scan & Go” feature, which allows shoppers to skip the checkout line, even while shopping in store. Sam’s Club also added the ability to cancel a pickup order, giving shoppers more flexibility and peace of mind. And, of course, the wholesale retailer fixed a few app bugs too.

Meanwhile, at Costco, some users were so displeased with the app experience that they were considering switching to Sam’s Club. In fact, some variation of the keyword, “Sam’s Club,” was found in over 100 reviews of the Costco app. Main complaint from these reviewers: the Costco app appears to be disconnected from the in-store experience.

The reviews above perfectly illustrate how important it is to implement and improve an omni-channel approach. In 2021, with most shopping done digitally, your business needs an app. But, more importantly, it needs an app that creates a seamless, synergistic shopping experience between the shopper's phone and the physical store. Sam's Club was successful in their omni-channel approach, and the payoff was clear. 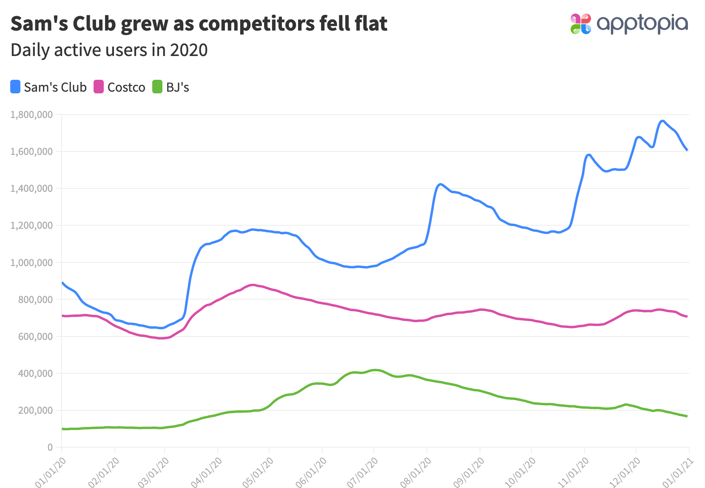 If you're still not convinced you should be investing in mobile, I recommend you listen to this Somewhat Mobile episode with Matt Hudson. Hudson is a long-time mobile savant, and the brains behind the fastest growing  retailer app in the country. Even as in-store foot traffic declined over 2020, Hudson's app continued to grow.

We also have an upcoming virtual session, where we'll be discussing the strategies of the most loved Shopping apps of Q4. Subscribe to our weekly newsletter so you can get notified as soon as it's out. In the meantime, familiarize yourself with the digital shopping space in our latest report. ⬇️