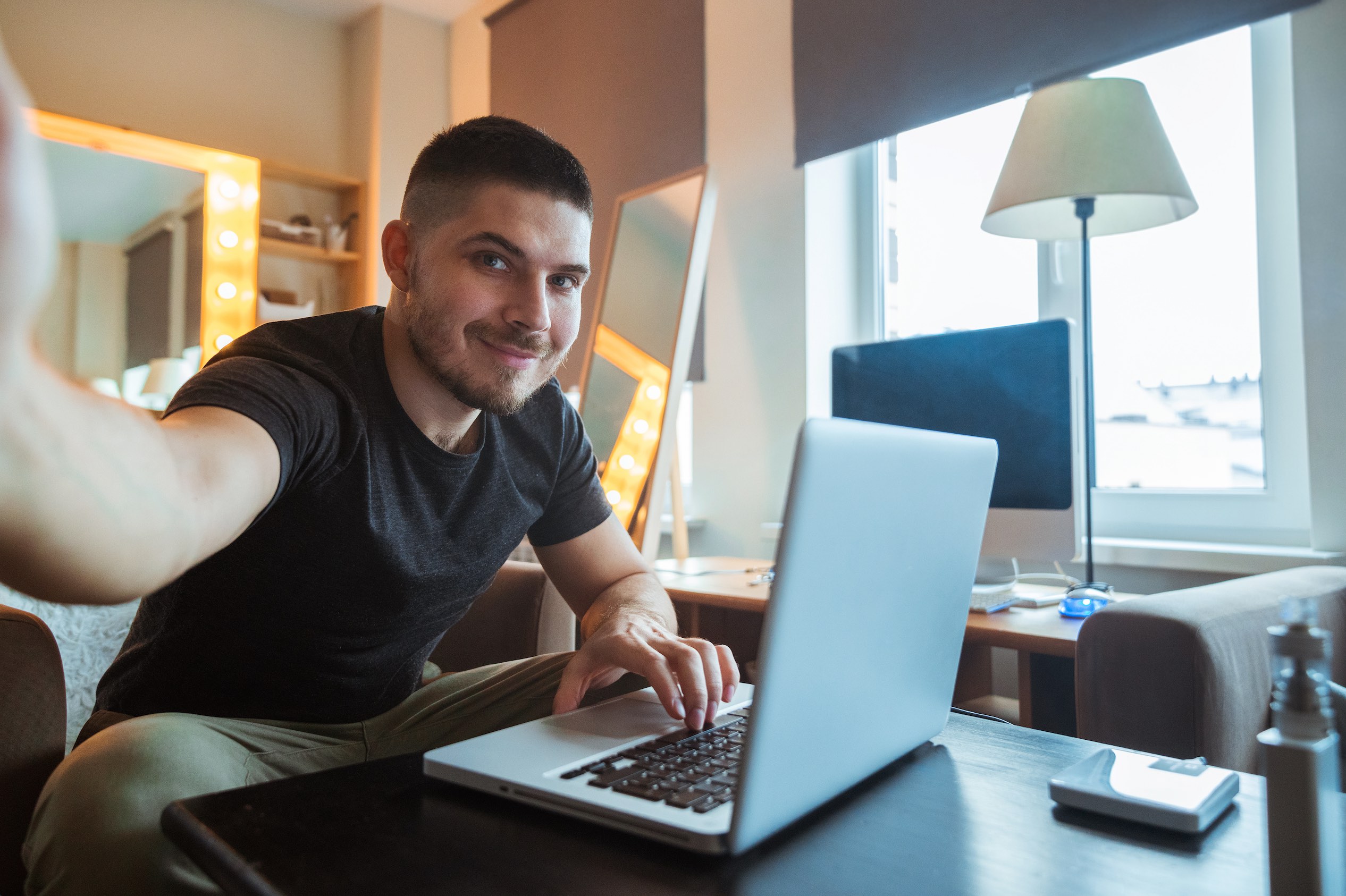 This article was updated on August 22, 2022. Below the hashed line is the original piece.

BeReal has now been downloaded 43.3 million times since launch in December 2019. Almost 41 million of those installs have come this calendar year, with the U.S. as the top market, contributing 40% of new users.

New powerhouse social apps do not appear every day. TikTok was the last app to do it (2018) and before that it was Snapchat (2011). While I don't think BeReal will be a powerhouse but it could fall into the secondary tier of social apps like Reddit or IMVU.

BeReal launched in late 2019 but didn't start taking off until early 2022. Clubhouse, the last social app sensation, launched in September 2020 but didn't start taking off until early 2021. This works out well for our comparison. We lined up cumulative downloads for both apps through the halfway point of their respective years (through June) and the numbers are close, but BeReal edges out Clubhouse by 1.45 million downloads. Also notable but not seen well in this chart is that Clubhouse's downloads are mostly from two very big spikes and BeReals are semi-continuously going up in number. It's a trend that does look more sustainable. 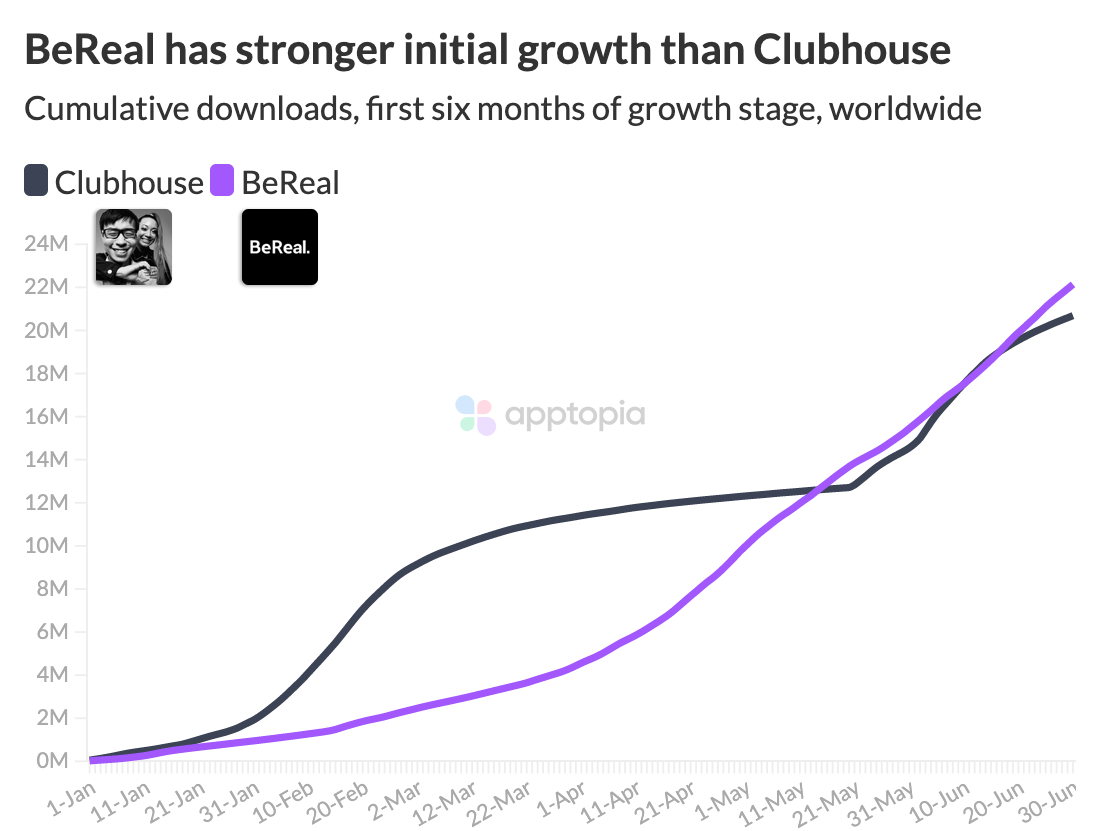 BeReal is a social/photo app you designed to share your authentic life with close friends. Year-to-date, its monthly active users have grown 315%. The app launched in December 2019 but 65% of its lifetime downloads have taken place this calendar year. 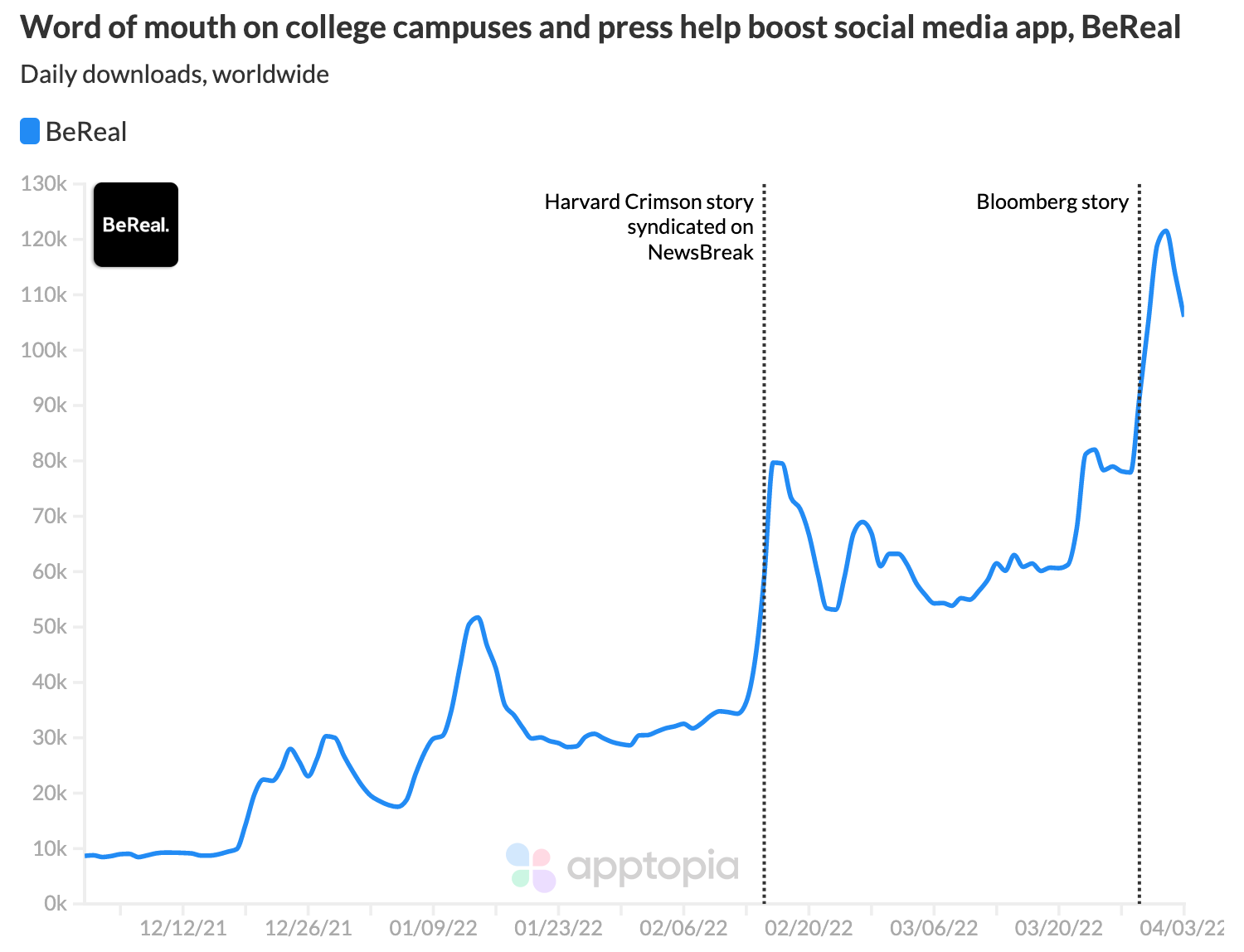 So what it BeReal and why is it different than other social media apps? Much like Dispo, which also launched in December 2019, the app's goal is to get away from detailed curation and professional influencers. In an effort to get a real glimpse into your life, the app only allows for you to post one picture a day (scarcity is also what helped Wordle grow retention).

All users get a randomly timed notification once a day, but at the same time, giving them two minutes to post a photo. Users can post late but their followers will be able to see that they did so. Followers will also know if, and how many, retakes a user took before submitting the photo. BeReal does not have any photo editing features or the ability to like posts. Users cannot browse through their friend's photos that day until they post their own, which is supposed to cut down on "lurking" and help boost engagement.

App developers understand the difficulty of competing with mega apps like Instagram and TikTok, so the next best thing is to create the antithesis of these apps, building for a smaller but fertile market.

Social media networks tend to get their start with the younger generations which is why BeReal has been running a campus ambassador program. Word of mouth on college campuses is how The Facebook and YikYak famously generated grassroots momentum and early power users.

BeReal has also taken some ideas from Locket, a social/photo app that topped the U.S. App Store this past January. Locket's chart-topping feature was live pictures from friends (usually a facial expression) being sent directly to users' home screens. BeReal introduced this feature on February 8th and dubbed the photos as RealMojis, to be sent in reaction to a user's daily post. Later that month, BeReal created RealMoji iMessage stickers to be used for texting, expanding its presence on people's devices. 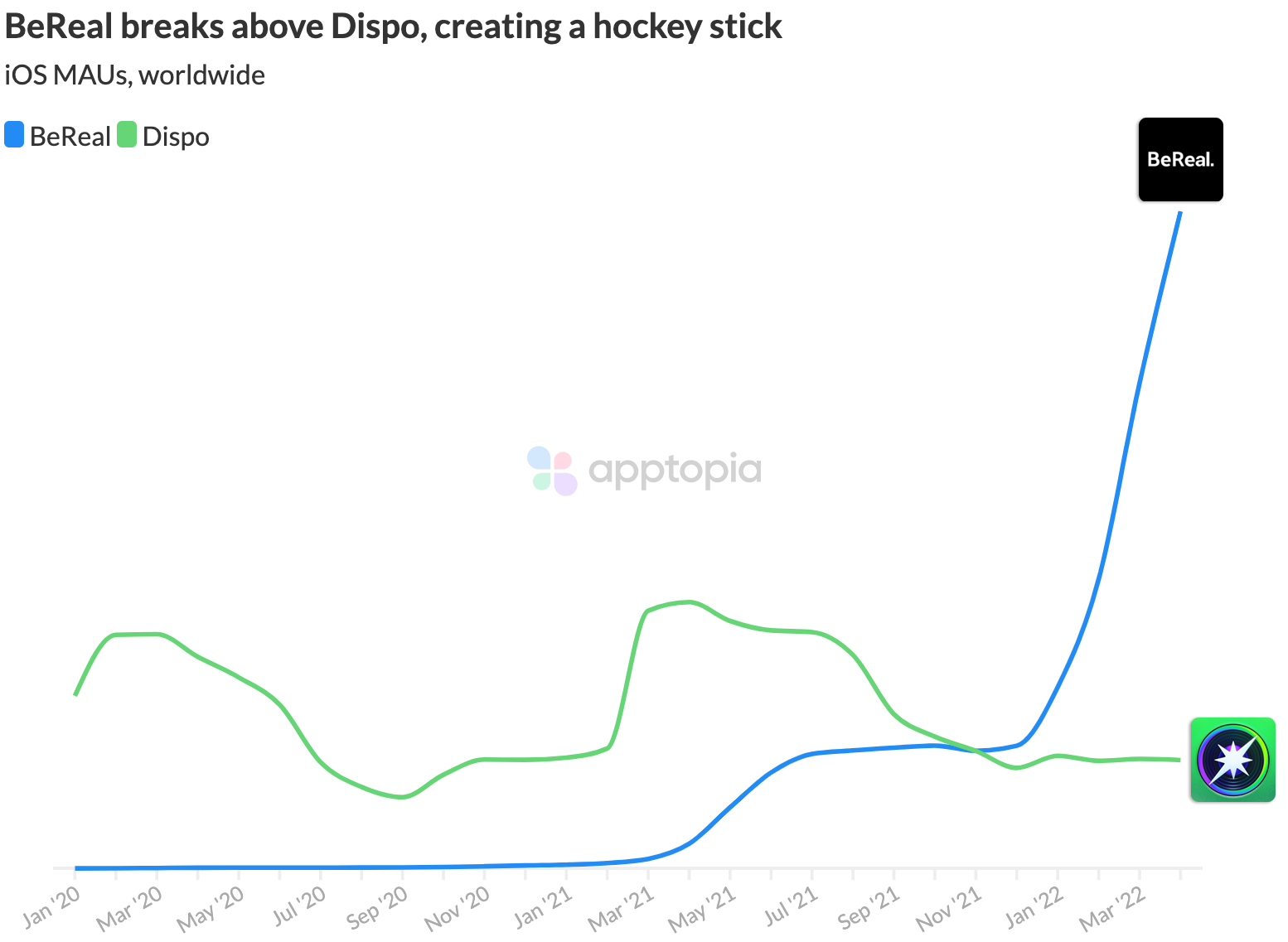 While Dispo is not an exact comp to BeReal, its goals of authenticity and living in the moment are similar. The two apps also launched only two days apart. Dispo is only available on iOS so we are only comparing it with BeReal's iOS users in the chart above. BeReal has been installed 7.41 million times to date, with 4.87 million coming from iOS. Dispo has been installed 6.15 million times to date but never built strong MAU engagement.  Dispo also had to contend with its founder, David Dobrik, being in the news related to sexual assault allegations which severely damaged the brand.

BeReal got its start in France, the app's largest market currently, responsible for 27.2% of its lifetime installs. The U.S. is its next largest market.