Food Delivery is cooling in the U.S.

The food delivery market in the United States is cooling. Since the inception of the industry, we’ve seen consistently strong growth for food delivery mobile apps, until now. We combined DoorDash, Caviar, Uber Eats, Grubhub, Seamless, and Postmates to create our market. Since May 2019, monthly active users (MAU) have dropped 13.3% while Sessions have fallen 17.7%. 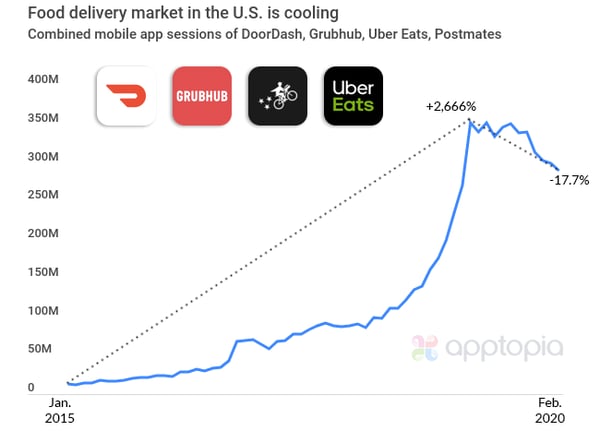 Please note, this is not a statement on revenue. It is very possible to decline in mobile app usage while increasing revenue. Our data pertains to mobile apps and does not take into account web/laptop activity, which is commonly used for lucrative corporate ordering.

Adam, why is it cooling?

As with anything in this world, there are likely multiple reasons. But we can get some insight from Apptopia estimates. They're showing that usage/engagement metrics started declining shortly after downloads (new users) started declining.  In a vacuum, this is either a bad sign or simply water finding its level. If active users are just going to fall in line with regressing downloads, this means these apps are heavily reliant on new users being acquired, and likely via steep discounting through new user promotions. At least that's what the industry has seen a lot of so far.

Once these promotions dry up, food delivery is very expensive for consumers. DoorDash and the rest of these providers know this though which is why they offer monthly subscriptions like DashPass and Eats Pass. These subscriptions enable them to acquire more predictable and consistent revenue. For example, Eats Pass subscribers get free delivery and 5% off orders over $15 for $9.99 per month. If the promotions and user acquisition efforts continue to slow down, it's unclear how far these apps will fall. Food delivery apps might only be used in time of "dire" need and corporate ordering, while average people instead put their money into grocery delivery apps like Instacart to save money in the long run. 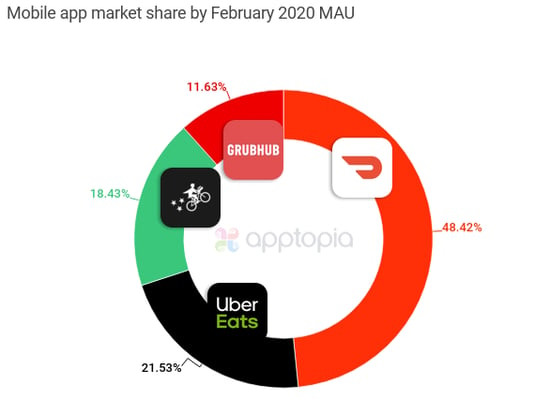 DoorDash started from the bottom, but now it's here. In January 2017, it was the smallest player with only 17.6% of our defined market. In addition to being available in major metropolitan areas, DoorDash has also focused on more rural areas where its competition isn't as strong or doesn't exist. Simply being available where no one else is has been a cornerstone piece to its dominance in the U.S. market.

Targeting major cities is not a wrong way of thinking though, as it makes for simpler business operations and logistics. DoorDash is hoping its long term plan of building relationships with customers and restaurateurs works, so when more competition to these more rural areas arrives, it's a lot harder to pry customers away from them. 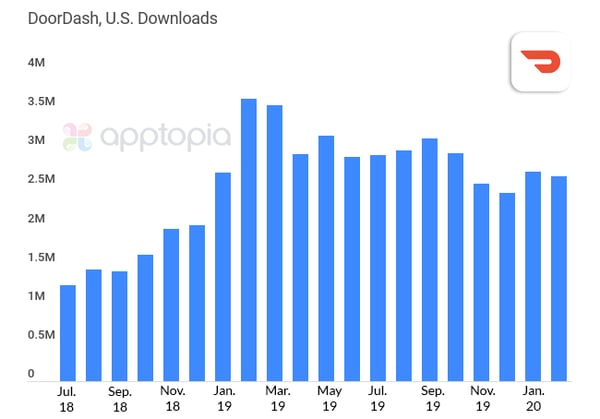 I know a good chunk of our readers are investors so I want to make an important distinction between "Active Diners", a company reported metric from Grubhub, and Apptopia estimated MAU. An Active Diner is defined as anyone who has placed at least one order within the past 12 months. MAU (what Apptopia is using to determine market share) is the number of unique individuals who have launched the app at least once during a specific month. Another thing to take into account when looking at MAU market shares is that just like Uber and Lyft, many people are active users of multiple food delivery apps. They're doing this to price guard and compare delivery fees against one another.

This is a space that has been and will continue to be ripe for mergers and acquisitions. Stay tuned!