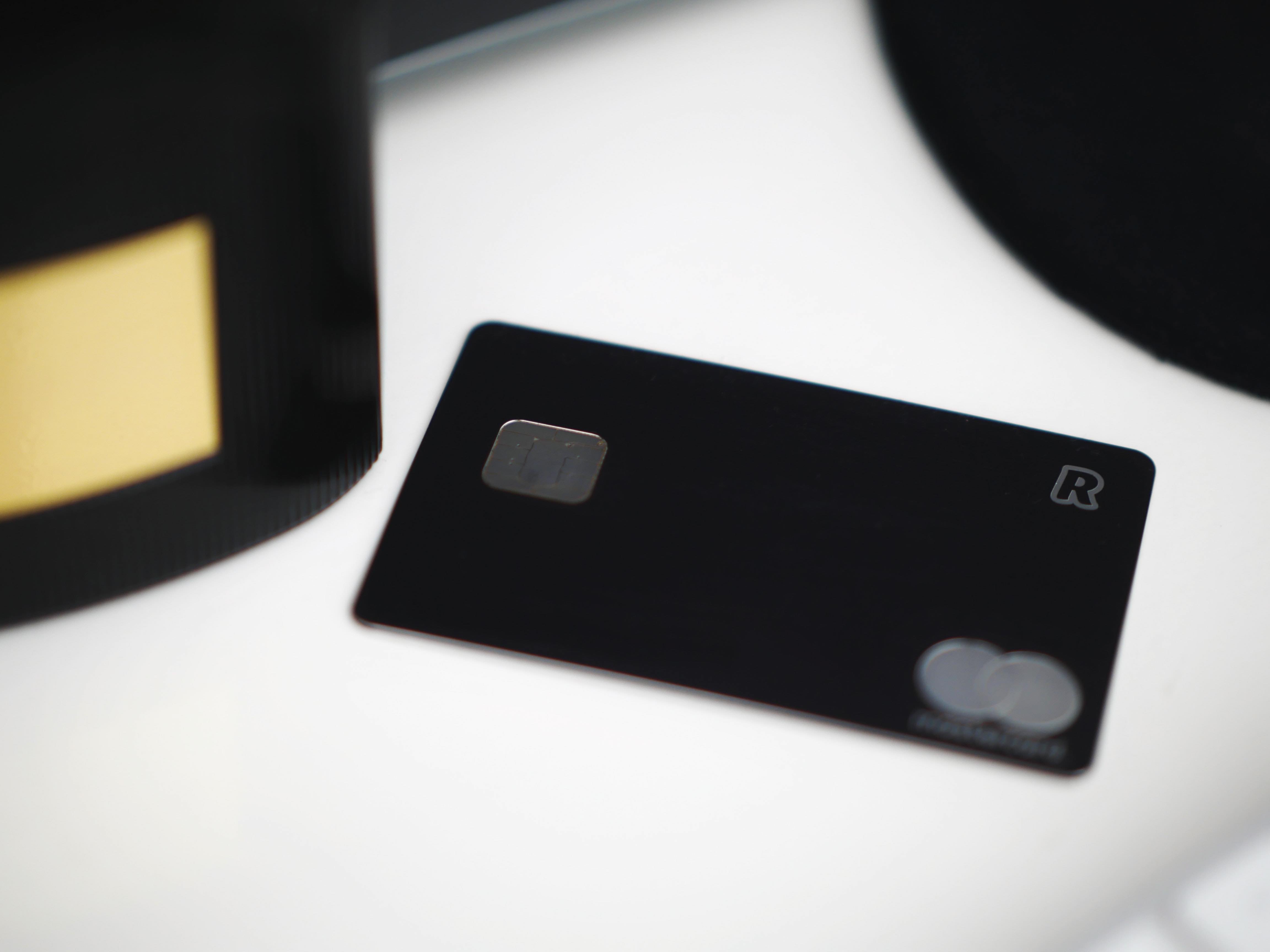 Worldwide quarterly downloads of the top digital banking apps have grown 209% over the past six quarters. While Mexico might be the next battleground for these “challenger banks,” the top markets right now are the United Kingdom and the United States. However, Nubank is so massive in Brazil that you could count it as a top market as well.

The seven apps I chose for a global look does not include every digital bank player. There are a good chunk more, many of them small (like Tandem in the UK) and many of them started as something else and have broken into the banking space (like Stash in the US). 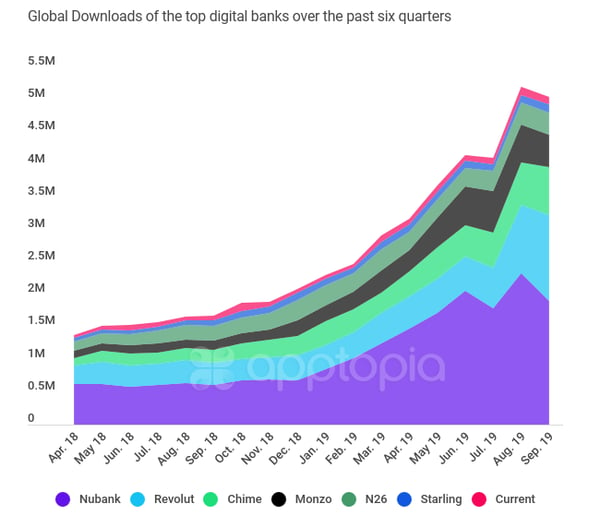 Monzo is the market share leader in the United Kingdom as judged by share of monthly active users (MAU). It recently broke above owning 50% of the market. Even though it looks like Revolut is getting smaller, it’s not. All top players are growing here, however, Revolut is losing market share along with Starling. Looking at app launches, N26 was first to market (Jan. 2015), soon followed by Revolut (Mar. 2015). 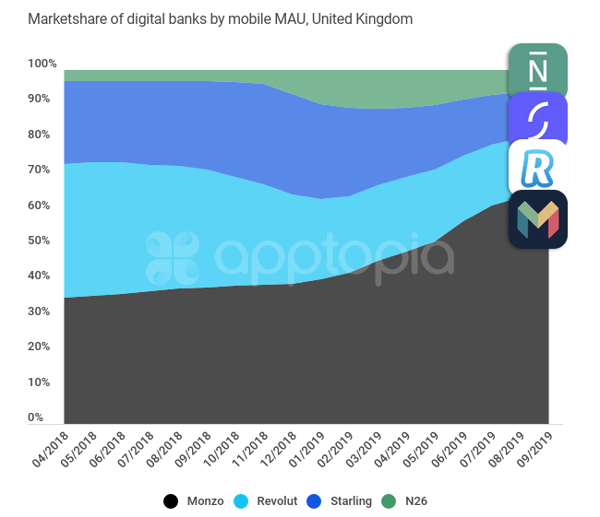 These digital banks are seeing success in the UK and looking to expand. Outside of Europe the United States are looked to as fertile ground. Chime is the clear winner so far in this market as the US is Chime’s home turf. Eventually Chime will feel the heat of increased competition but that day is not today. While the other apps are available for download in the United States, they are in different stages of their rollouts.

Revolut lets you get on a waiting list (I was #9,039 in line) and is said to be launching end of this year. Starling seemed like it was going to let me register but never sent me a text with a code to confirm (even after requesting a resend) so I am not sure what’s going on there. Monzo announced availability in June and N26 announced availability in July. Nubank is available for download but only offers the app in Portuguese and Spanish. In other words, it is not yet localized for the majority of the US market. 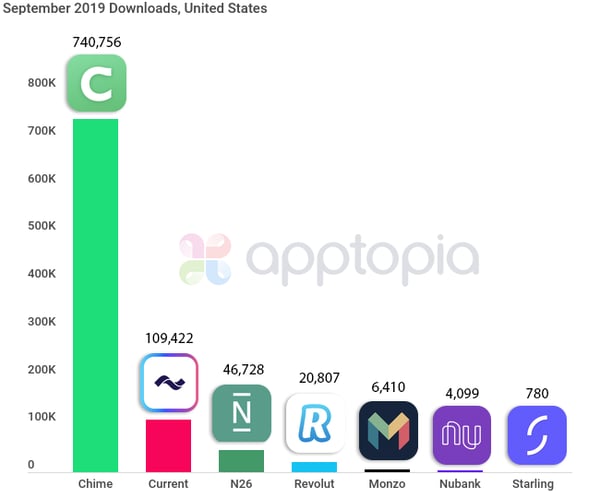 Nubank has the largest global user base

Nubank is by far the largest player, regardless of market availability.  It dominates the market in Brazil and is as good a bet as any to reign supreme in the majority of LATAM countries. The company recently announced it now has 15 million clients. Apptopia estimates the mobile app to have 8.5 million MAUs, so more than half of its clients can be counted as active app users. Nubank is also accessible via its website.

But who is growing the fastest?

Chime and Revolut are growing their downloads most rapidly but a lot of Revolut's can be attributed to European expansion in countries like Romania and Ireland. Chime is purely in the USA for now. Let's take a look at global MAU growth from October 2018 through September 2019: 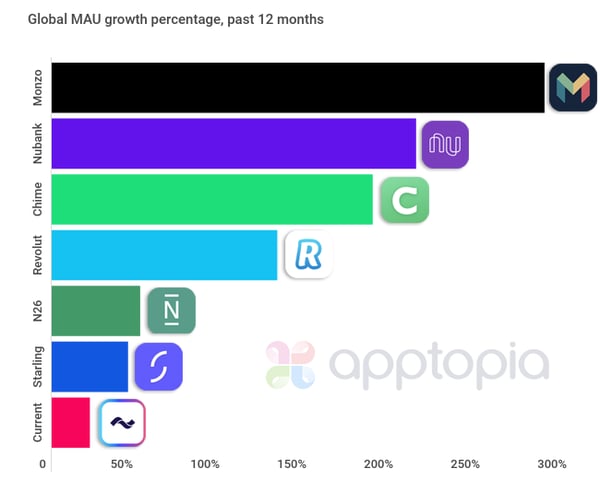 For those of you used to looking at metrics like "same store sales" I have broken out the equivalent here for the UK challenger banks in the UK. In other words, this removes MAUs due to market expansion: 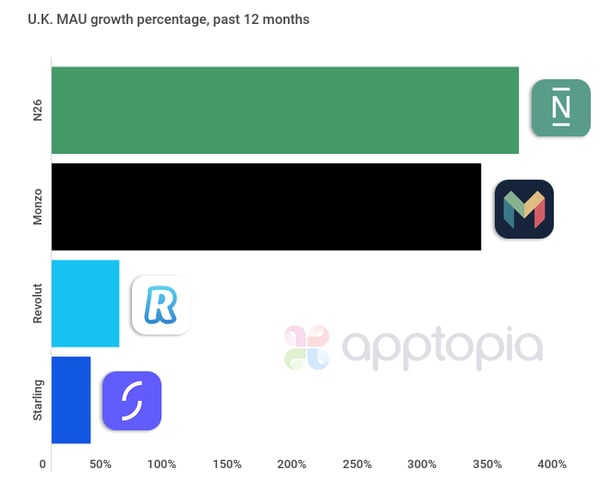