It’s 4:20 somewhere, right? The top three (Leafly, Weedmaps, MassRoots) marijuana-related apps have grown monthly active users an average of 536% over the past two years in Apple’s App Store. Marijuana is big business now and it’s inevitably getting a share of the smartphone home screen. If you haven’t been keeping up, marijuana use is legal in seven states and Washington D.C. while medical marijuana is available in 28 states and our nation’s capital. This is a unique market in that it’s entirely new from a legal business perspective but it has a built in and mature consumer base that is ready and eager to buy, and investors like Peter Thiel have noticed. In 2015, his Founders Fund invested $75M in Privateer Holdings, a marijuana company that owns several pot-related brands. 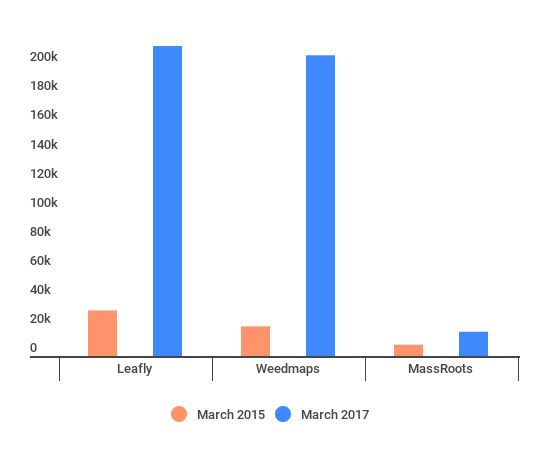 It’s not just the younger generations using marijuana-related apps. Apptopia Demographics show an average of 24% of users are over the age of 50 for the three aforementioned marijuana apps. While there is no way of knowing for sure, it’s very a possible a large number of these older users are doing so for medical purposes. 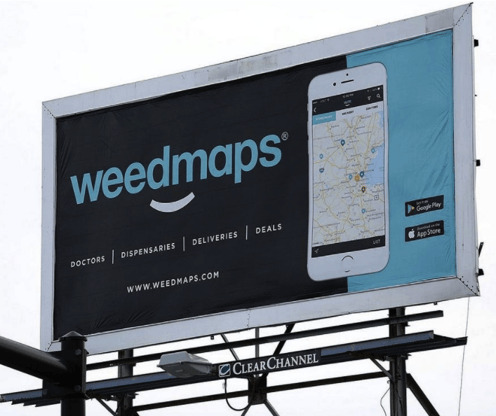 Weedmaps started a billboard campaign in 2017 to drive app downloads

Leafly, Weedmaps and MassRoots are part social network, part resource and part product locator. Users can research individual strains, connect with others who share their interests and locate local dispensaries to see what products they carry. Other marijuana related apps include dating apps (High There!), social networks (Duby), grow optimizers (GrowBuddy) and more. 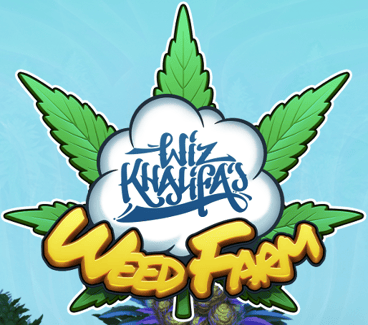 Famed musical artist and self-described marijuana aficionado Wiz Khalifa announced he will release a mobile game this week, on April 20th of course, entitled Wiz Khalifa’s Weed Farm. According to Mr. Khalifa, the game will “offer a glimpse into the future of legalized cannabis, and the opportunities it has already created for a new generation of entrepreneurs and marijuana enthusiasts alike. The game strives to create an authentic experience, capturing the state of the marijuana industry by seizing opportunities in entrepreneurial fashion, reinvesting into business, and compounding returns.” In an Instagram post, he claims the game will be “better than Pokémon [GO].”

If you’re curious about Weed Farm’s debut, data for any app mentioned in this post, or any app that exists in the world, please do not hesitate to contact us or request a demo.