Top platform apps as a grouping have added more than half a million daily active users in the United States between November 2019 and November 2020. This is an increase of 21%. Platform apps are the apps contractors use to execute the services of companies like Uber, Grubhub, Instacart, etc. The pandemic has increased the number of these workers in the country as people who have lost their jobs turn to different sources of income and as food delivery companies expand and their demand increases.

Data makes you dangerous. Get insights sent to your inbox every Friday. 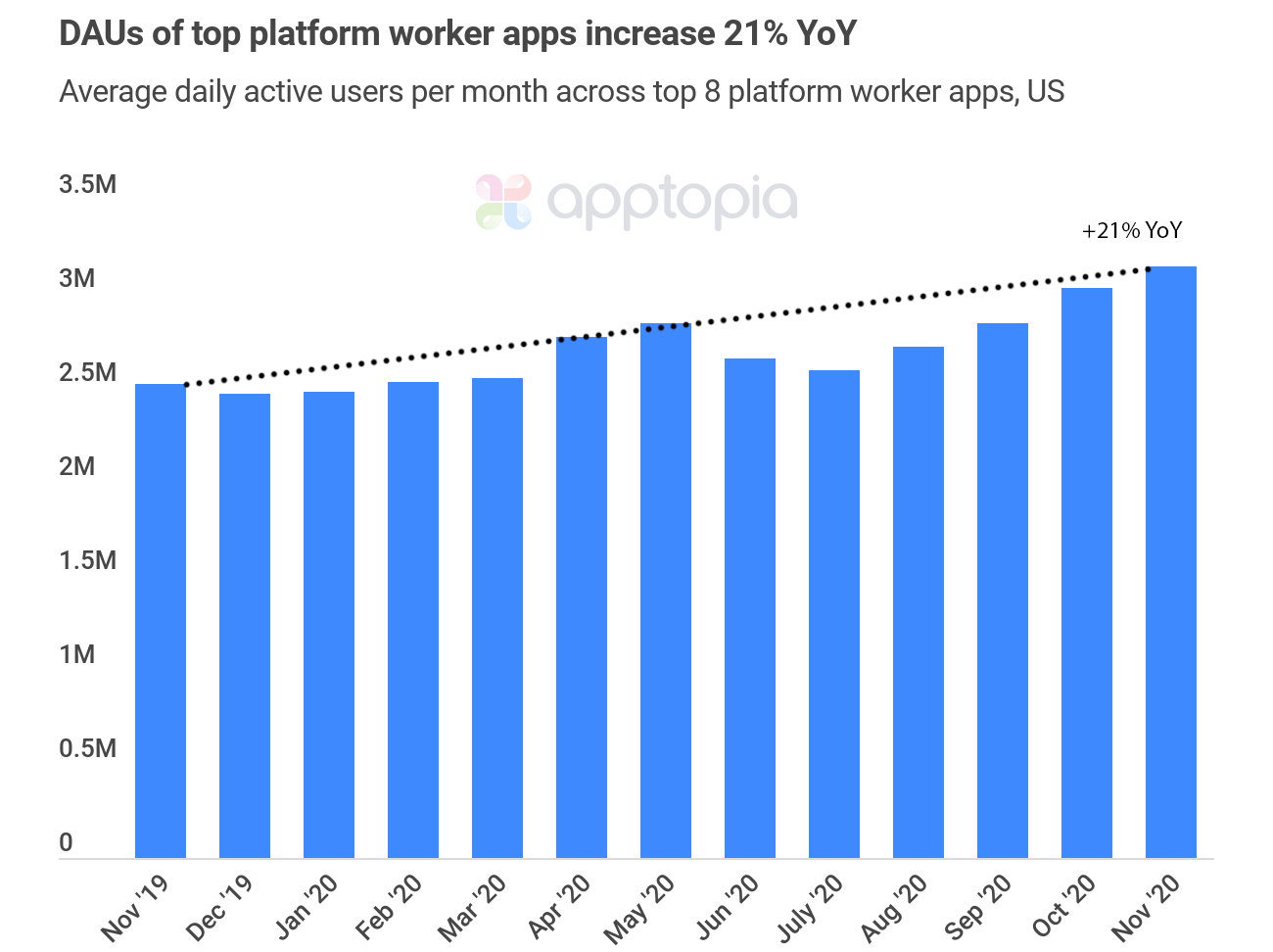 For this analysis, we’ve pulled data for Uber Driver, Lyft Driver, DoorDash Driver, Grubhub for Drivers, Postmates Fleet, Instacart Shopper, Amazon Flex and Shipt Shopper. Keep in mind that users of the Uber Driver app could be driving passengers and/or delivering meals for Uber Eats. For Amazon Flex, we are only measuring iOS as its Android version is not available on Google Play. This is likely because Amazon has its own Android app store that competes with Google’s.

You’ll notice in the image above that much of the growth takes place in August through November of this year. Both Shipt Shopper and Amazon Flex hit all-time highs for DAUs in November but DoorDash Driver is the largest contributor to this growth, and as of last month, it was the largest of the apps analyzed by average monthly daily active users. DoorDash Driver has averaged 574% and 66% more monthly downloads over the past six months than Grubhub for Drivers and Postmates Fleet, respectively.

Before digging in to the data, I thought Instacart Shopper would be the main driver of growth given a shift in consumer behavior with the onset of the pandemic. While the surge there was large, it was short lived.

In reviewing Uber Driver vs. Lyft Driver DAUs, Lyft is down 44% YoY in November compared to just 30% for Uber. This is surely due to contractors for Uber being able to deliver food via Uber Eats in addition to driving passengers. We already know the Lyft app has better user retention than that of Uber, and this is the case with its driver app as well.

Once someone downloads one of these apps and starts using it, how likely are they to continue working on the platform? If you click the big blue button below you can compare the user retention of the other platform worker apps for yourself.