The top 10 quick-service restaurant apps in the U.S. were downloaded 10.4 million times in June, 3.7 percent less than those the month prior. Year-over-year in the month of June, downloads of the top 36 quick-service apps are up 35 percent. A download represents a new user and the first conversion on the mobile app customer’s journey. 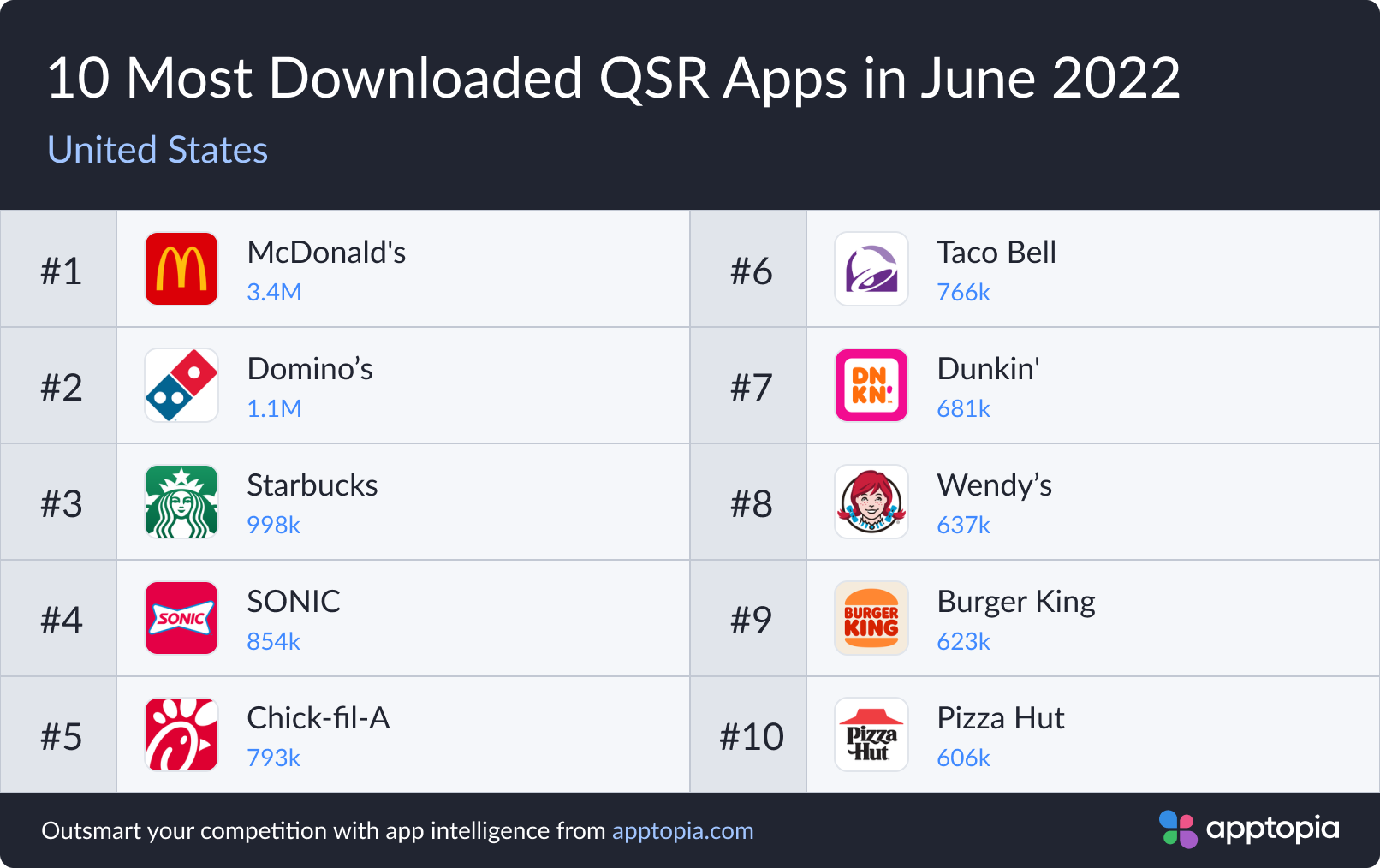 The biggest chart riser this month was Wendy’s, moving up four spots from No. 12 to No. 8. The biggest faller was also by four spots as Taco Bell slipped out of the No. 2 spot and into No. 6. McDonald’s remains No. 1, and has been for as long as I’ve been writing these articles. The company is not resting on its laurels either; three of McDonald’s five biggest months for new app installs have been the last three consecutive months—April, May, and June. In Q2, the company has been deliberately driving traffic toward its mobile app and almost nothing else. The latest example of this is the company hosting a digital summer camp all taking place through its mobile app.

The digital initiative will last 27 days with the stated goal of building loyalty with its Gen Z audience. Each day’s events include deals and menu hacks that invite app users to build their own menu items. This is McDonald’s, so of course there are also celebrity endorsements: app-only musical performances by Blackbear, Omar Apollo, and BIBI and Kid Cudi.

Another reason McDonald’s and other quick-service restaurant apps are doing well are the current economic conditions. The food these establishments serve is typically less expensive than elsewhere and they are consistently offering free food or free food with purchase. The top 36 quick-service apps hit their highest quarterly number of downloads ever in Q2 2022 with 46.9 million. The top eight fast food apps also hit a high for quarterly downloads at 23.3 million. The top eight fast food apps are included in the top 36 quick-service restaurant apps and represent 51 percent of the total for the quarter.

Apptopia’s data has seen consumers flocking to grocery store apps for their digital coupons as inflation rises. Among the top grocery store apps in May, user reviews mentioning the word "coupon" shot up 75 percent from April. I wanted to see if the same thing was happening in the fast food space.

According to Apptopia, the number of times the keyword “reward” has been used in the app user reviews of the top eight fast-food apps has increased every month this calendar year. This is a year-to-date increase of 27 percent. However, the keyword “coupon” was growing slowly from January through March but then began falling from April through June, leaving the June numbers down 18 percent compared with the numbers from January. The rewards are becoming more enticing these days. Loyalty is up for grabs.

The last thing to note for the month of June is the biggest grower. Moe’s Rewards, the app of Moe’s Southwest Grill, had the greatest month-over-month downloads growth in the U.S. out of the top 36 quick-service restaurant apps. At 84 percent, it was significantly higher than the next greatest downloads grower in Arby’s at 36.5 percent. The increase for Moe’s was a short-lived spike. Downloads returned to their normal levels shortly after. It appears the spike came from the chain launching in Union City, Georgia, where the franchise ran a strong giveaway offer of free burritos for a year to 50 winners. To enter, customers needed to check-in through the Moe’s Rewards app.