Top QSR apps in the U.S. for November 2022 by Downloads 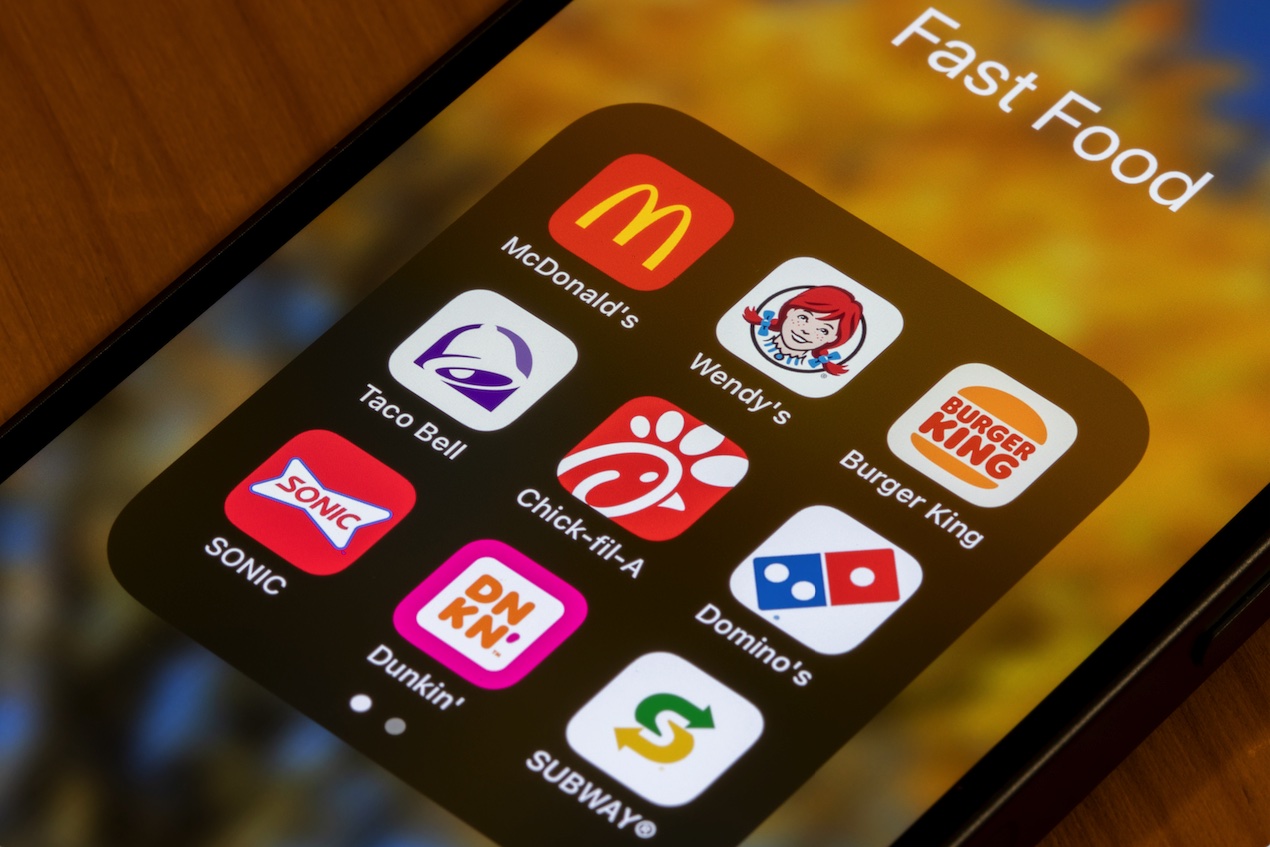 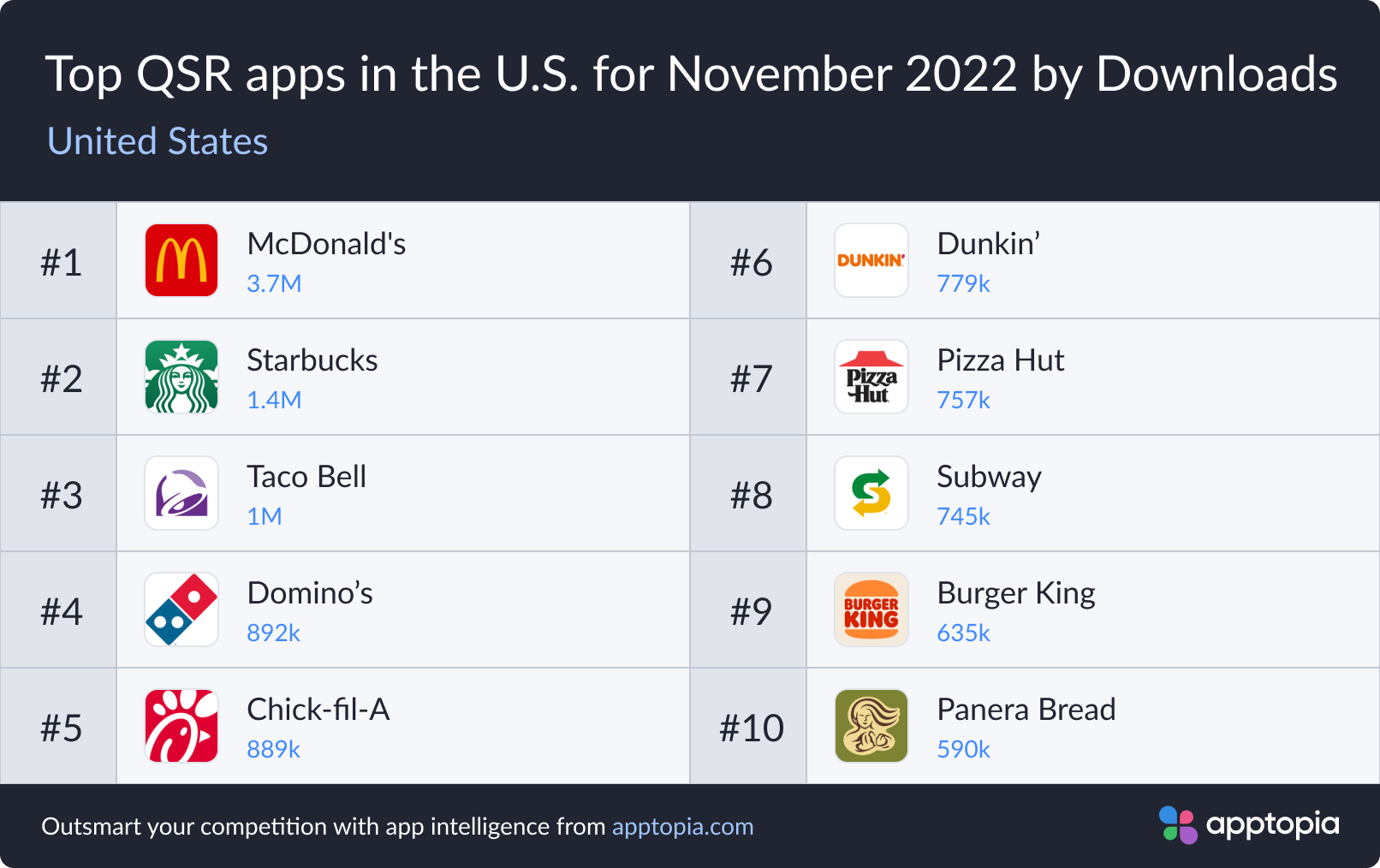 This November, Domino’s and Dunkin’ swapped spots, moving up two and down two, respectively. Subway moved its way up two spots and was the fastest growing app this month, with 20 percent  more downloads in November than it had in October. The most noteworthy part of this month’s chart is the debut of Panera Bread, earning a spot for the first time since we’ve been tracking this market (May 2021). Last month, Panera Bread rang in at No. 14.

Panera Bread broke into the top chart because it was giving away free drinks through the end of the year for users who joined its Unlimited Sip Club subscription by November 16. This type of transactional giveaway will always create a spike in downloads but it remains to be seen if users will stick with the subscription once the free month ends. Panera was able to help get the word out by advertising heavily on social media apps. Apptopia estimates that 41 percent of its app’s advertising impressions stemmed from Facebook, 39 percent came from TikTok videos, and 19 percent from YouTube Ads.

As noted earlier, Subway gained the most downloads month-over-month on a percentage points basis. While November 3 was National Sandwich Day, I don’t believe that promotion was the reason behind Subway’s surge in early November downloads, because the restaurant did not drive people to the mobile app with its promotion to celebrate the holiday. It did however increase its mobile advertising activity, increasing impressions as much as 1,200 percent. These ads mostly ran on mobile websites like nfl.com, cartoonnetwork.com, and the Facebook mobile app. They were promoting a BOGO sandwich deal available to customers if they purchased in-app. 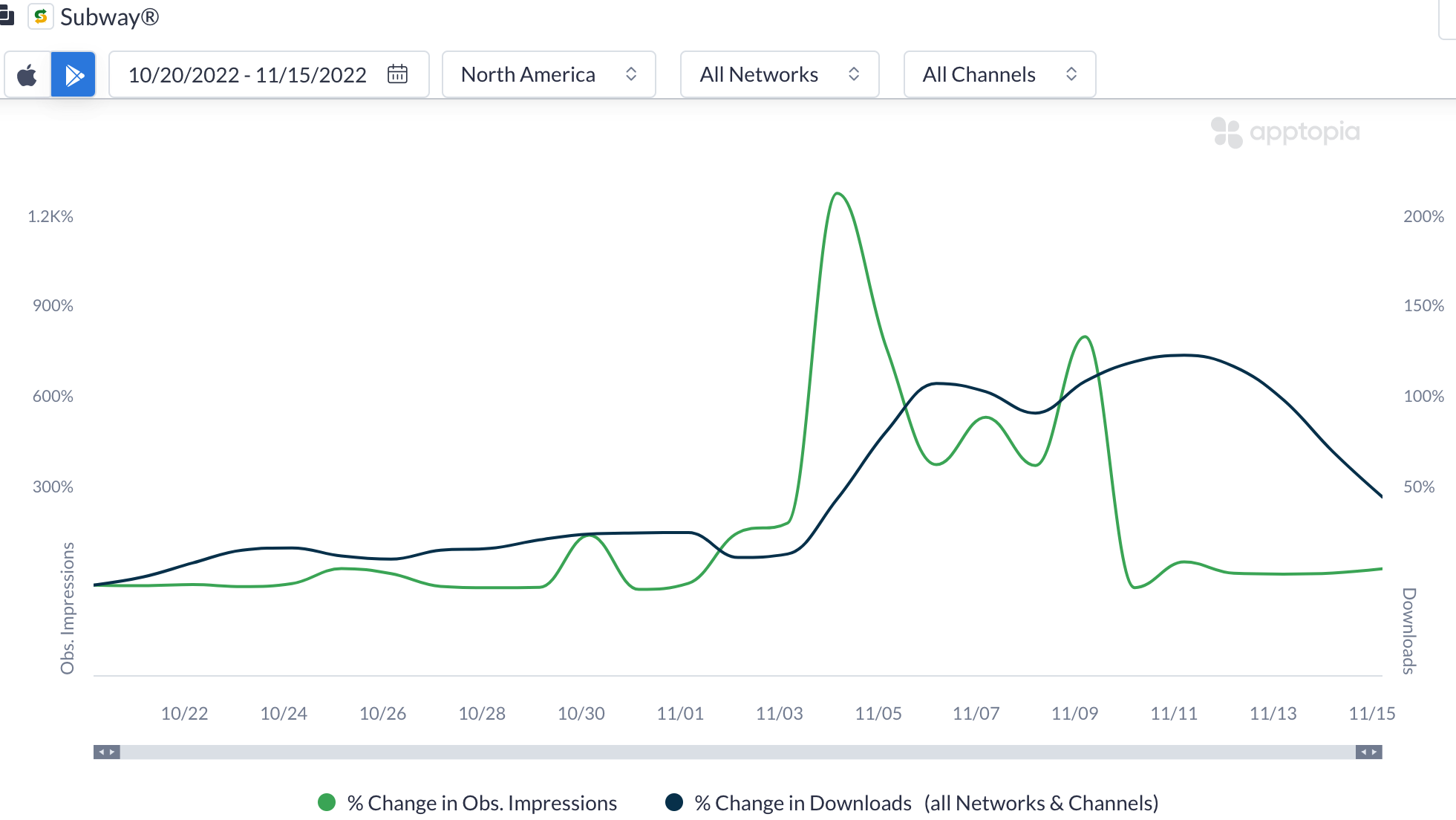 Since we’re nearing the end of the year, it makes sense to look at which of the top 36 quick-service restaurant mobile apps have increased their engagement the most, year-to-date. To determine this, we’re looking at the growth of average number of user sessions per monthly active user, comparing January 2022 with November 2022. Why does engagement matter? App users are typically a brand’s most loyal and valuable customers. They care more, leave ratings and reviews more, and order more.

The fastest growers so far this year are Zaxby’s (317 percent), Jersey Mike’s (176 percent), CAVA (130 percent), Panera Bread (39.5 percent) and Whataburger (39.3 percent). Some of these are not surprises at all if you’ve been tracking the quick-service mobile landscape. We know from the last article in this series that Zaxby’s received a major boost from launching its rewards program. CAVA also showed up on our fastest growing MAU chart from a few months ago, which we attributed in part to an increased number of locations. Panera Bread saw success from its Unlimited Sip Club relaunch. Jersey Mike’s and Whataburger are not apps this series has shined a light on yet though. We’ll review further in the next installment.