The top 10 quick-service restaurant apps in the U.S. were downloaded 12.3 million times in October, 23 percent more than those the month prior. Year-over-year in the month of September, downloads of the top 36 quick-service restaurant apps are up 27.5 percent. A download represents a new user and the first conversion on the mobile app customer’s journey. 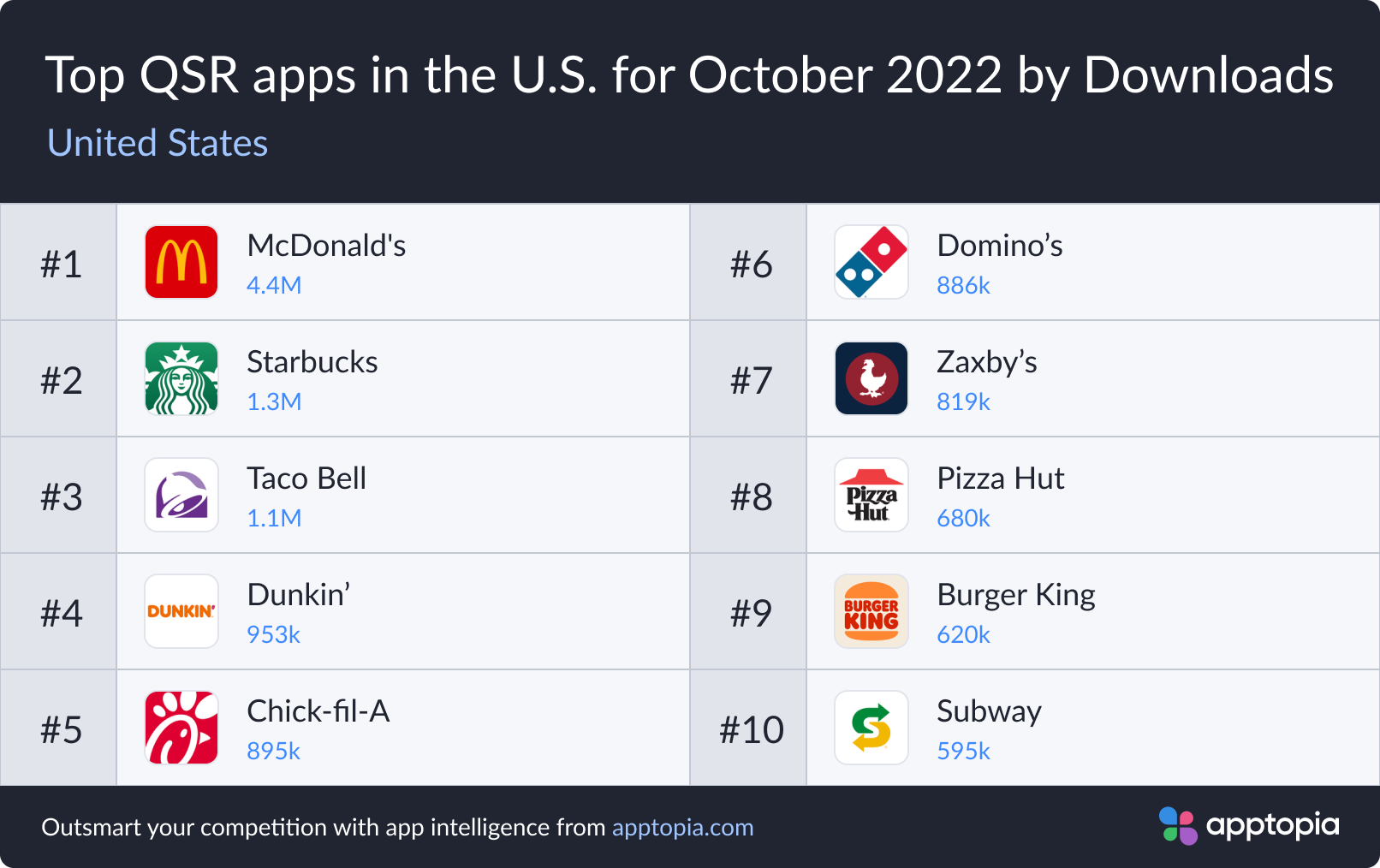 Domino’s, which is typically ranked third on the download chart, has continued to fall. Last month, it came in at No. 5 and this month it dropped a spot further to No. 6. In previous months, its install numbers were falling whereas from September to October, it actually gained 85,000 installs. Dunkin’ gained two spots while Burger King dropped two spots. Sonic, after a record five consecutive months of being in the top 10, dropped off the chart entirely and fell to No. 16. Since we’ve been producing this list (June 2021), Zaxby’s has not cracked the top 10, but that changed this month, coming in at No. 7. Last month, it was ranked 23rd.

You may remember that last month Zaxby’s grew its downloads by 204 percent, month-over-month. It was the fastest grower in that sense. This month it is also the fastest grower at 196 percent. The company launched its new, mobile-focused loyalty program, Zax Rewardz. To incentivize customers to join the program, the chain has been offering a free Big Zax Snak Meal with every new download or update of the existing app. This was officially announced on October 11 along with the ability to order ahead, picking in-store or curbside pickup. About a month earlier though, the app updated with these features for those paying attention. 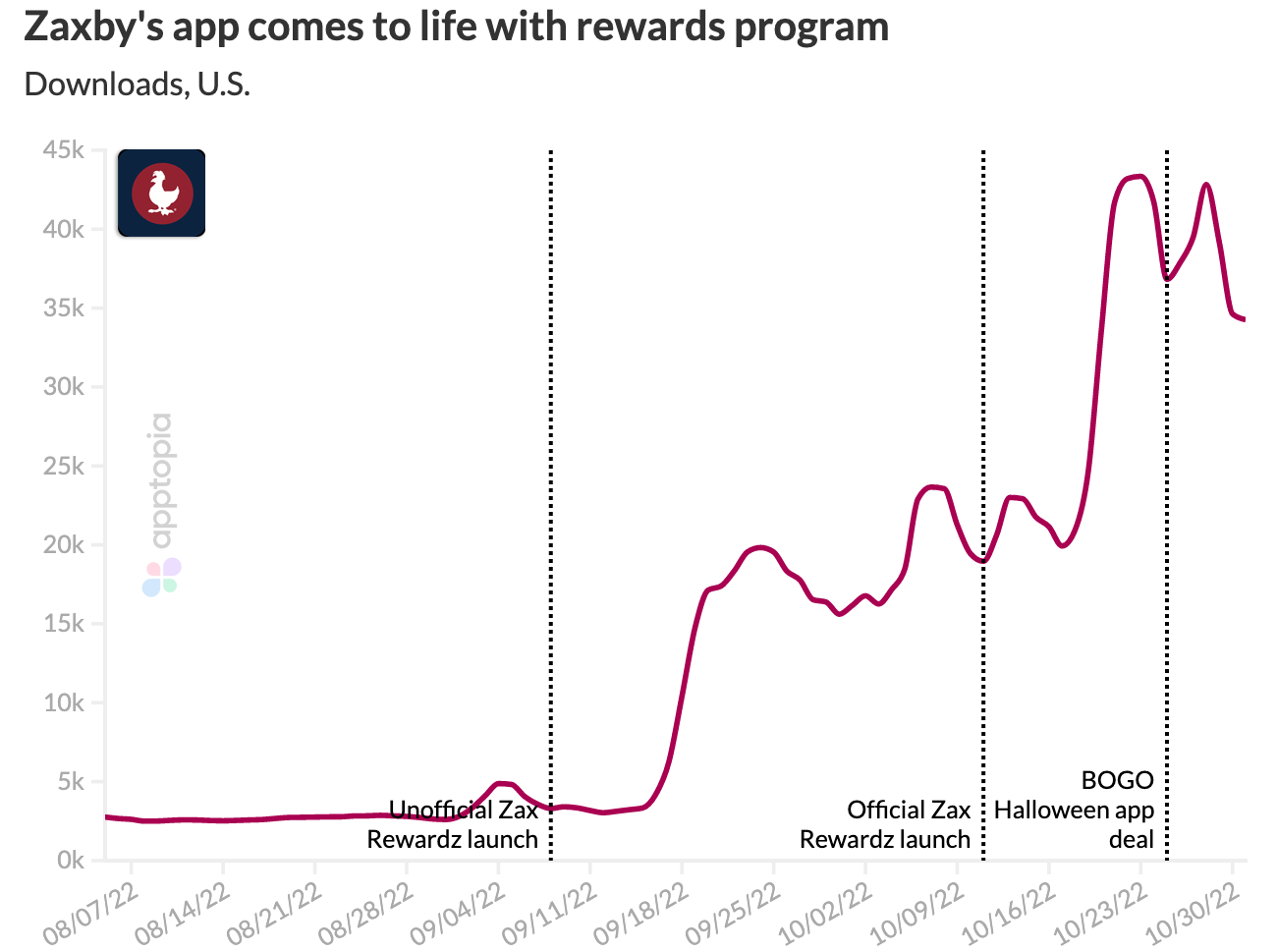 Burger King appears to have squandered another opportunity to drive customers to its mobile app and have them join its loyalty program, providing them with richer customer data. Last October, I wrote about how Burger King did not push users to its mobile app for its Keep it Real Meals campaign. Rather, it drove users to a specific URL. I think driving people to a URL that is not your homepage is clunky and similar to asking people to take down a phone number. This was less than a month after its nationwide rollout of Royal Perks, its loyalty program. Burger King’s app gained new users but dramatically less than its competitors had for similar campaigns.

A very similar situation played out this October where Burger King partnered with video game, Call of Duty. The Whopper chain offered players special in-game rewards available through the purchase of a Call of Duty Whopper Meal. Nowhere in its promotions did it try to shine a light on ordering through its mobile app. We know the majority of mobile gamers order from quick-serves via mobile app and I don’t think it’s a stretch to say that the younger gaming community at large is partial to ordering their favorite food via an app.

This was a massive promotion with a very small increase in Burger King mobile app adoption, at a time when top competitors like McDonald’s are doing everything they can to drive mobile adoption. There is something to be said for zigging when your competitors zag but customer personalization via mobile isn’t a nice to have in 2022—it’s a need to have.