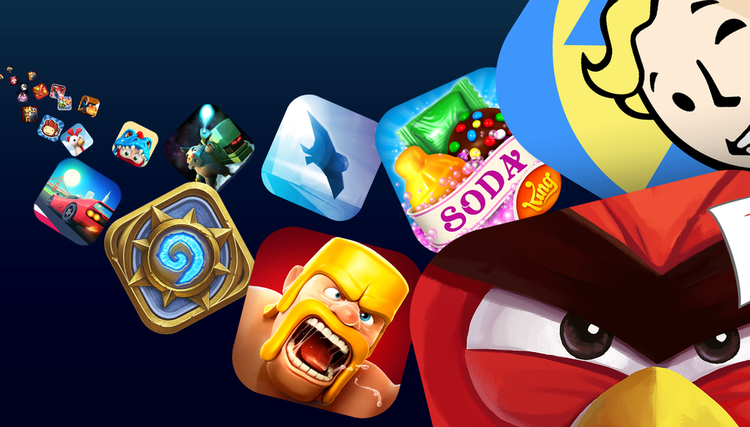 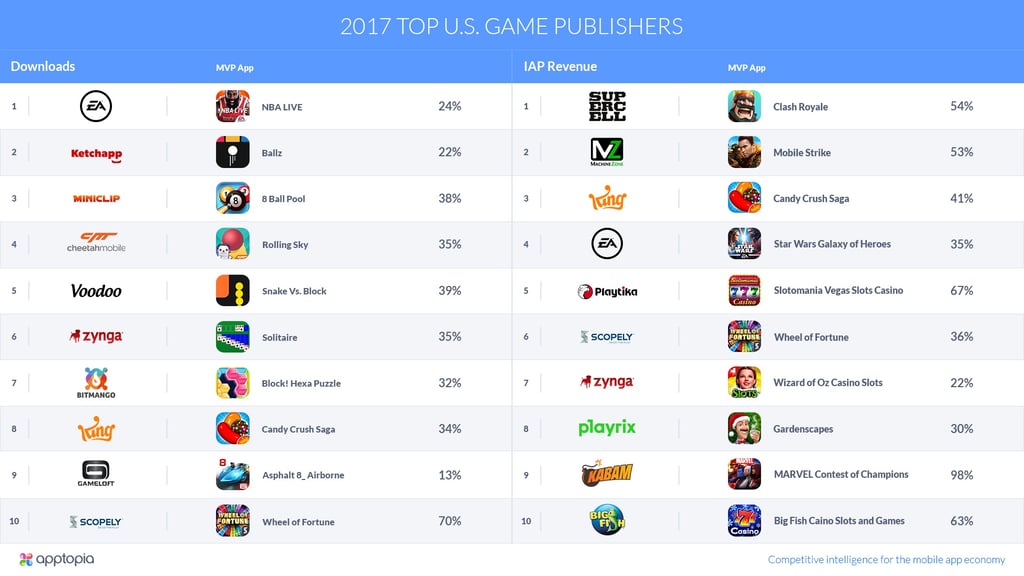 Supercell generated the most IAP revenue in 2017 in the U.S. across all Games publishers. Clash Royale was responsible for an impressive 54% of this. The Finnish publisher sits one spot outside the top 10 for 2017 Download Rank.

Above you can see we’ve ranked the top 10 publishers in the United States for both Downloads and IAP Revenue. We’ve also highlighted the best performing app for each publisher for the respective metric. The percentage seen is the percentage of downloads or IAP revenue the app is responsible for in 2017 for the publisher as a whole.

Ketchapp’s (owned by Ubisoft) main competitor, Voodoo, grew stronger in 2017. So strong that it wasn’t even on our top 100 downloaded list for 2016 sits at #5 in 2017. Learn more about Ketchapp and Voodoo here.

Only one of the top 10 IAP Revenue Rankings changed from 2016 to 2017 - Niantic fell out of the top 10 while Playrix found its way into the 2017 grouping. Solely on the back of Pokemon GO, Niantic is no slouch. While still a massively popular and highly capable revenue generating game, its astounding ability to monetize dropped in the US. It dropped from the #5 spot in 2016 to #83 this year.

While King is owned by Activision Blizzard, we have all three companies separated for this report as they still publish independently. The top of the IAP Revenue chart is so strong that if we were to add Activision and Blizzard revenue to King, it wouldn’t move above its #3 spot.

Due to the release of Homescapes, a follow up to Gardenscapes, Playrix achieved a Download Rank of #20, up 33 spots from 2016. Other big download risers include Crowdstar (52 spots) and Kongregate (21 spots).

On the other hand, some publishers had their Download Rank fall in 2017 including Mattel (49 spots), Kabam (29 spots) and Machine Zone (15 spots).

Publishers with rising profits included NaturalMotion, a Zynga Subsidiary, whose IAP Revenue rank rose 11 spots to #21. Elex rose an impressive 60 spots to #11. KONAMI sits at #30 but was unranked last year while Pixelbury moved up 33 spots to #35. ROBLOX did enough to bump up 14 spots to #34.