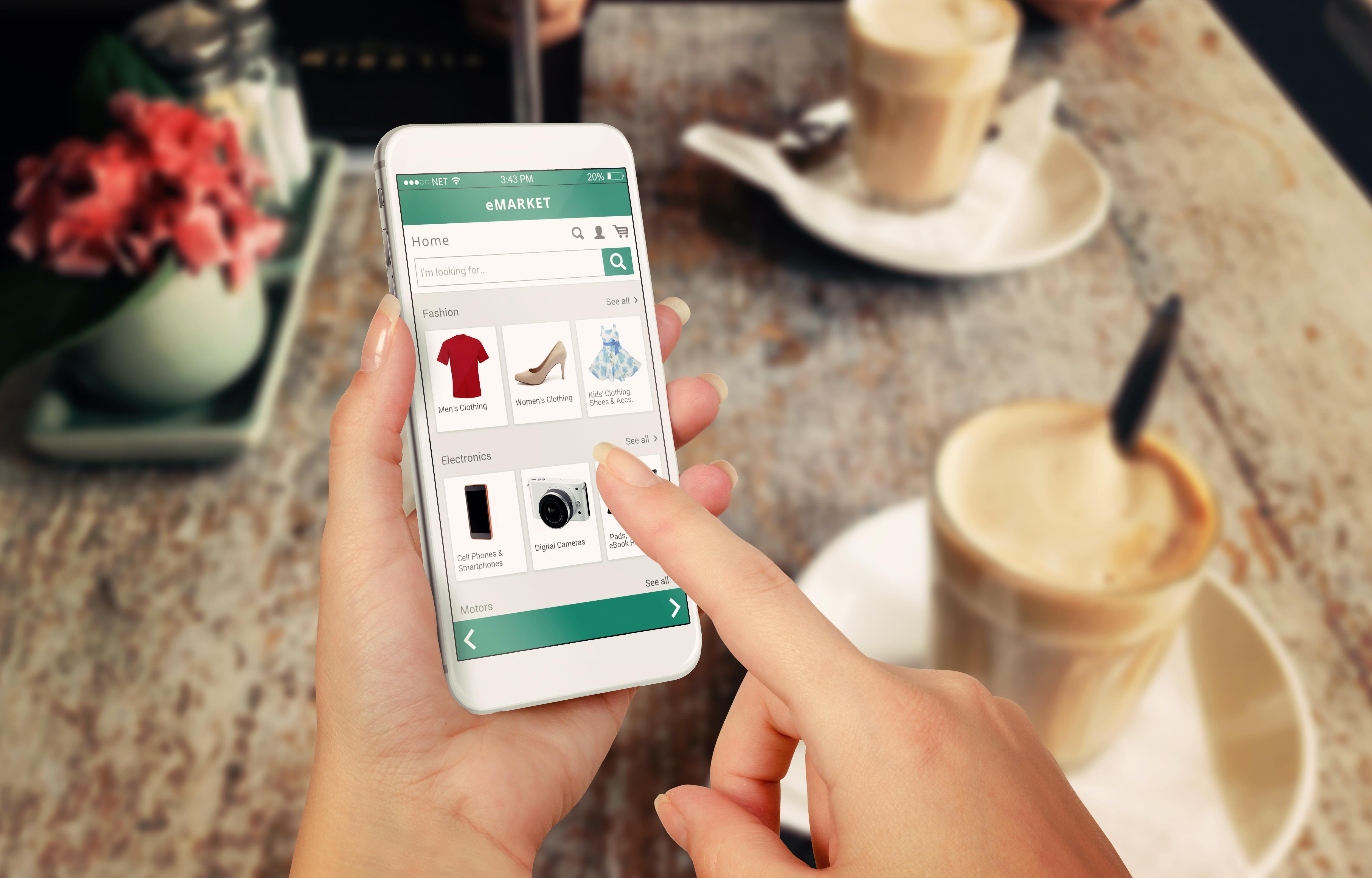 We've picked out the top mobile app happenings from this Black Friday holiday weekend. We’re reviewing data in the United States from Thanksgiving day through Cyber Monday. Mobile app sessions of shopping apps in the US hit 1.29 billion, a record for the holiday weekend. 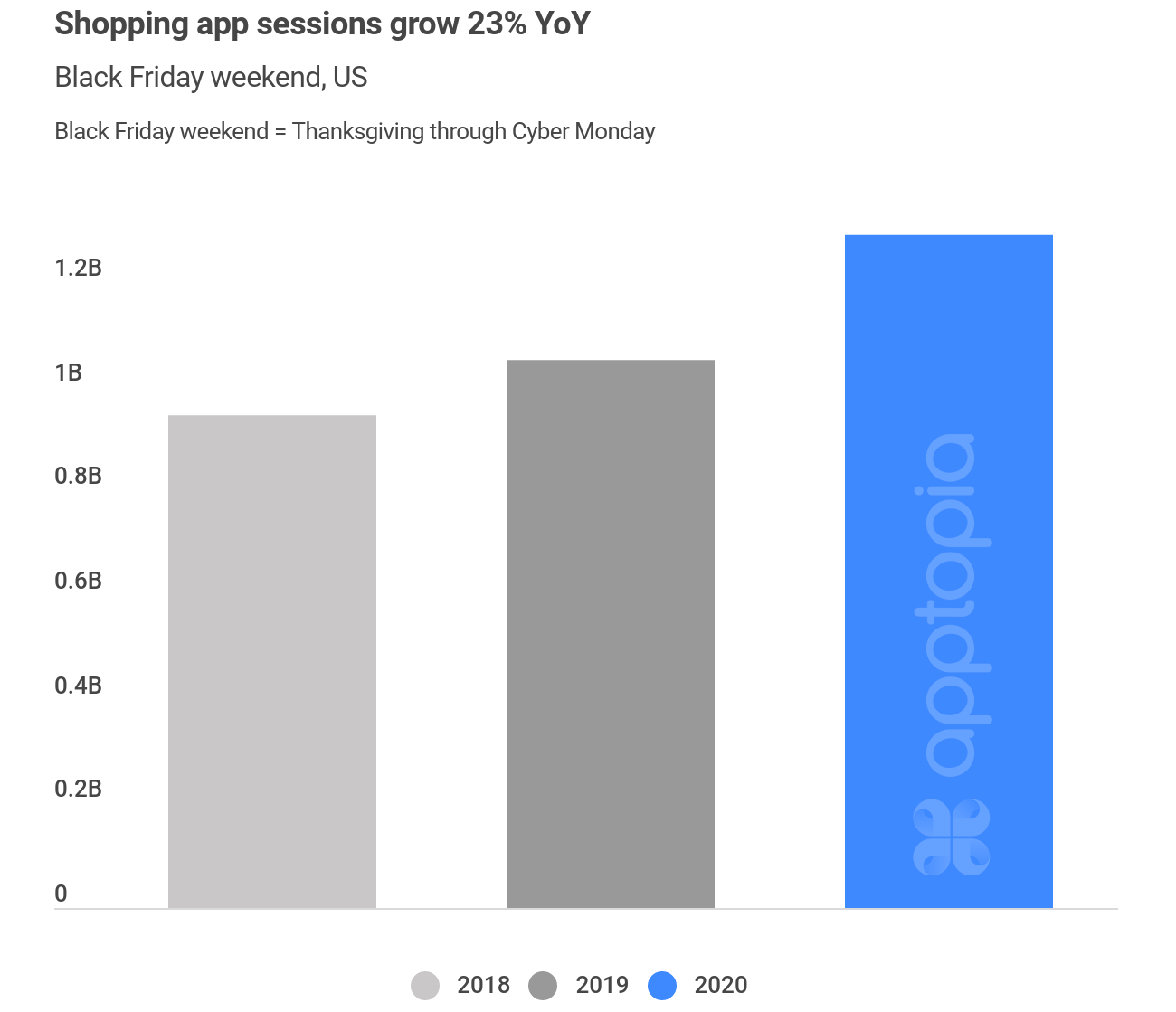 The large retailers are first up. Walmart has continued to attract more downloads and user sessions than its biggest ecommerce competitor in Amazon. Walmart grew its Black Friday holiday weekend mobile app sessions 24% YoY while Amazon grew 19%. In addition to discounts for Black Friday and Cyber Monday, Walmart has been gaining users from its integration of its grocery services into its flagship app. Walmart Grocery Shopping was previously only available via a separate app. The company also recently launched Walmart+, a similar membership to Amazon’s Prime.

FOMO doesn't look good on you. Get current insights delivered to your inbox every Friday morning. 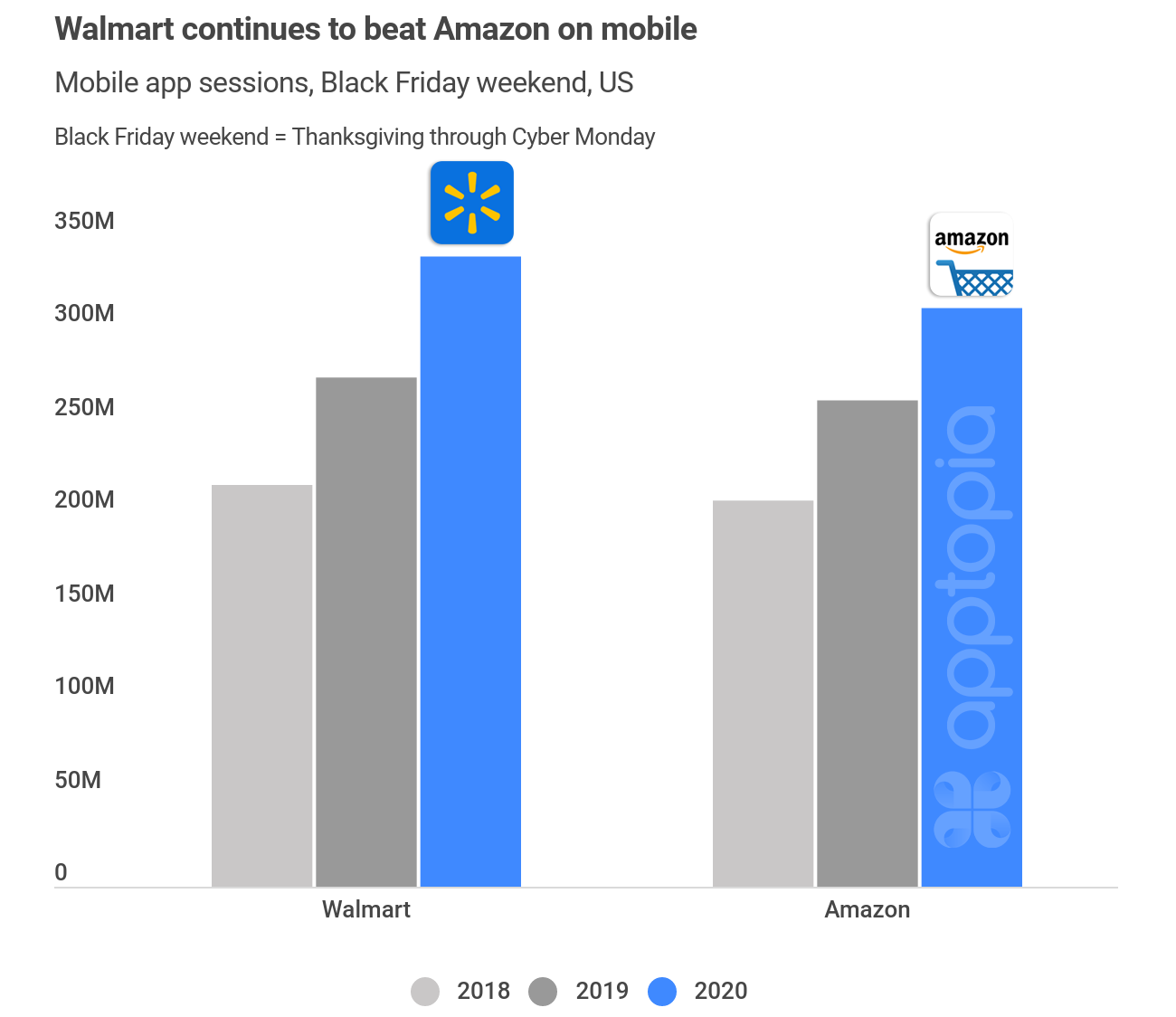 Looking across other large retailers, Best Buy and Target were less widely used but still ended up as top performers over the holiday weekend. Best Buy actually came in with the largest YoY growth of user sessions across all large retailers with 127%. The app recently hit an all-time high for daily active users (DAUs) on the back of the PlayStation 5 launch.  Speaking of which, this is likely the reason behind GameStop hitting an all-time high for DAUs over the holiday weekend as well.

Downloads of smart home apps like Google Home, Amazon Alexa, Ring, Geeni, SmartThings and SimpliSafe rose again during the holiday weekend but took a hit when comparing to previous years. 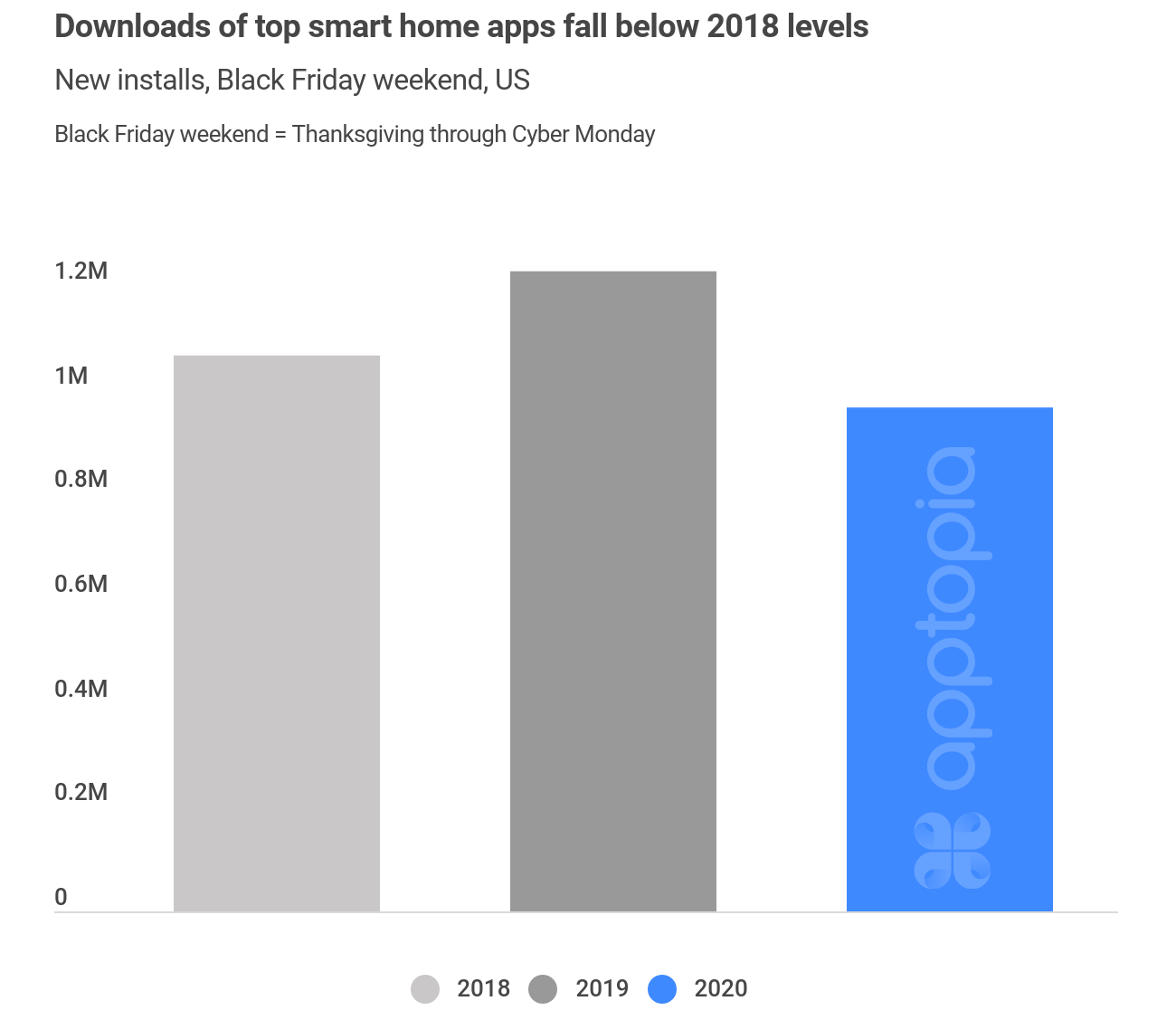 Installment payment, or 'buy now, pay later' apps, continue to gain impressively, growing 152% YoY. These are apps like Klarna, Affirm, Afterpay, Quadpay and Sezzle. These apps enable shoppers to purchase large ticket items and pay them off over time. Often they do not check one's credit and enable the user to avoid paying interest as well. These are a good option for consumers who do not have or want or cannot obtain a credit card. Not only was Klarna the largest of these apps in terms of absolute numbers but it is also the fastest growing at 244% YoY. 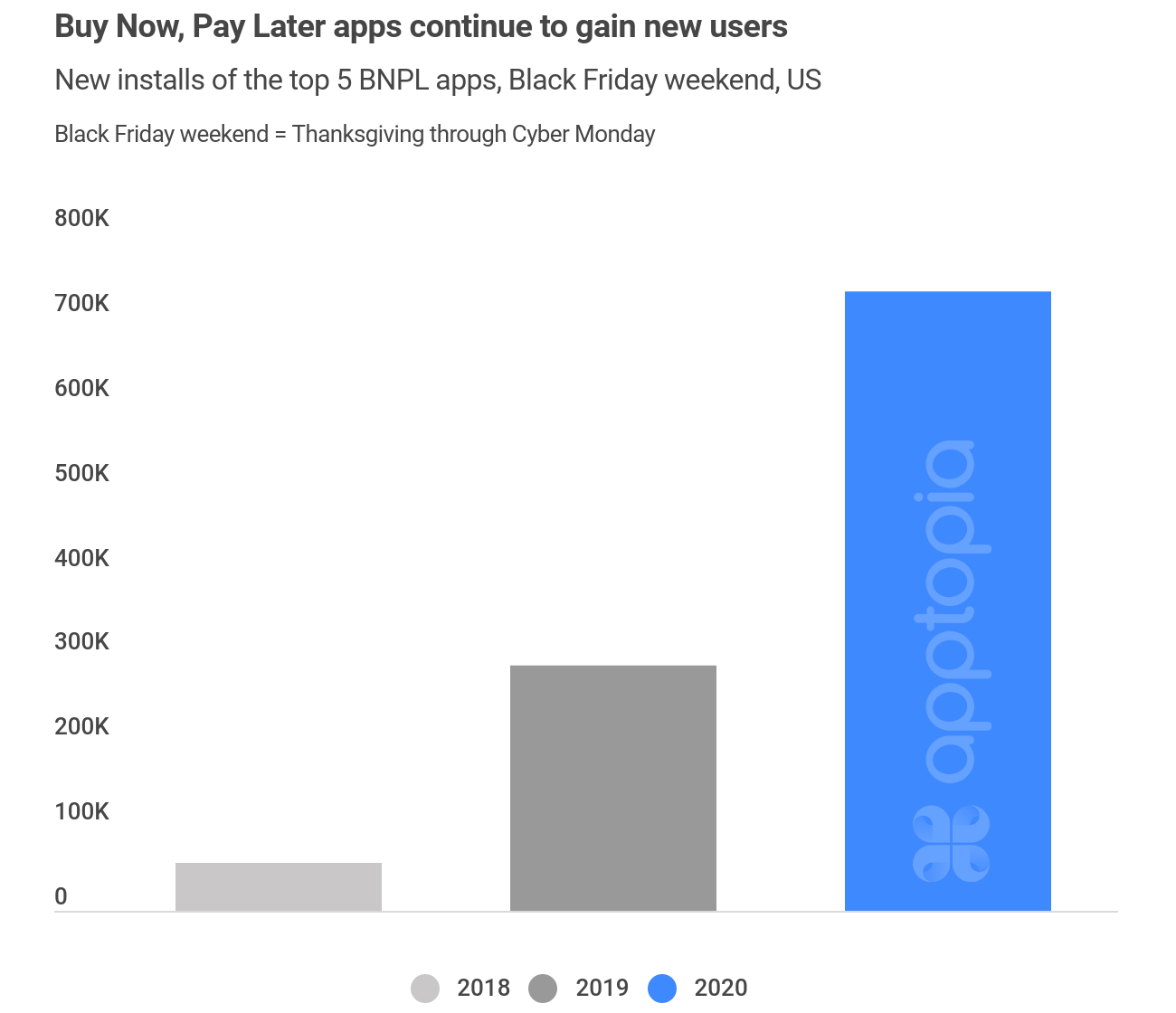 Hulu once again offered potential customers a year's worth of its basic service for $1.99/month. This is regularly priced at $6.00. The promotion was good for about 600k downloads over the course of the holiday weekend, an 11% YoY gain.