Where are they now? Yo, and other apps you forgot about

Are they dead in a ditch? Hooked on drugs? Having a midlife crisis? No, we’re not talking about ex-celebrities like Frankie Muniz or Kel Mitchell, but mobile apps. These once popular apps have been relegated to the depths of the App Store ranks. At their peak, they ranked within the top 5 Overall (includes Games) Rank spots on the U.S. iOS App Store. We’re only looking at apps that are still alive and not those removed from the stores such as Yik Yak, Beme, tbh, Meerkat, etc. If you have any you think we missed, please tweet me a line and I’ll add them in if they qualify.

Not gonna lie, I thought this one was dead for sure. Do you remember Yo? The entire premise of the app, which launched in April 2014, was that you could only send/receive the message “Yo” to others and nothing else. The founders called it “context-based messaging.” However, the pure simplicity and stupidity of it created a fad and a cult following that grew the app to have millions of users in a short period of time and even attracted attention from Stephen Colbert. At its peak, Yo ranked #2 Overall. Now it currently sits at #1085 in Social Networking and does not rank Overall. In its prime it had around 2 million registered users. Now, there are about 6,000 daily active users. Want to understand this phenomenon more? Check out this interview with the founders, conducted by VentureBeat.

The app that was supposed to threaten Facebook… did not do that. The pitch behind Vero was that it would never show ads, the lifeblood of Facebook, on its platform. Users quickly flocked to the app for this promise but experienced far too many crashes and glitches. Additionally, its terms of service worried users that the company would be able to use their likeness as well as any and all content posted by them. In late February 2018, Vero hit #1 Overall in the U.S. App Store but quickly fell. It does not currently rank Overall but does sit at #1095 in the Social Networking category. 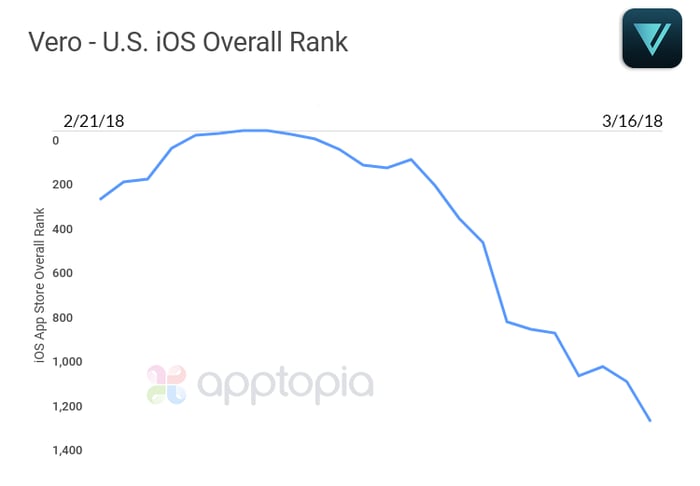 Sarahah is an anonymous feedback app, and this type of app (think Yik Yak, tbh, Secret, Whisper, Lipsi, etc.) usually lives out a true Icarus story - soaring high before plummeting downward to its demise. Sarahah was actually booted from both the App Store and Google Play for promoting cyber-bullying. However, it relaunched on Google Play in January 2019. A little more than a month after its original launch, it hit the #1 Overall spot and stayed there for a remarkable 18 days in a row. Looking at its new version, its last ranking in the United States was on Google Play on September 19, 2019 at the #496 spot in the Communication category. It still ranks in Egypt (its best performing country) in addition to a few other countries.

This is an app from Apple, launched in April 2017 to easily edit mobile videos. From TechCrunch: “Clips lets users cut together short videos and photos, add filters, emojis and music and send them out into the world — albeit without a standalone social network attached.” Clips did not actually do too much at launch but did rank as high as #4 Overall in April 2019. Now, the app does not rank Overall or even in any specific category but is still available to download. Its last rank was on iOS in the Photo & Video category at #1 on April 4th 2019.

This app was brought to us from the creator of Vine and when it launched in August 2017, it was truly innovative for the mobile app space. It’s a live interactive video trivia game show. It ranked as high as #4 Overall in February 2018. It no longer ranks Overall but can be found at #1171 in Games. If you’ve been following along with HQ Trivia news you will know that it was slated to be dead but is now maybe alive again. 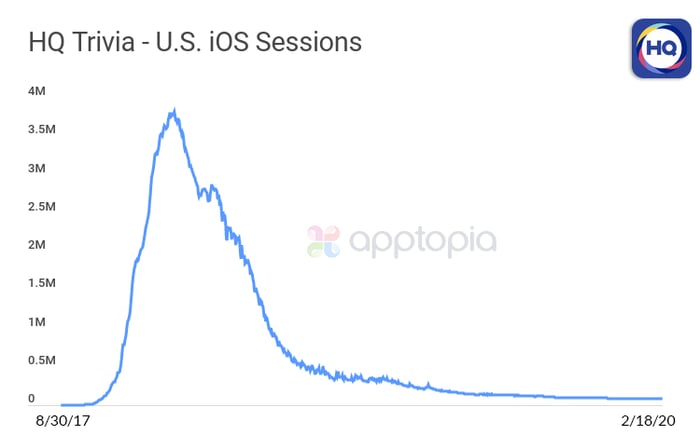