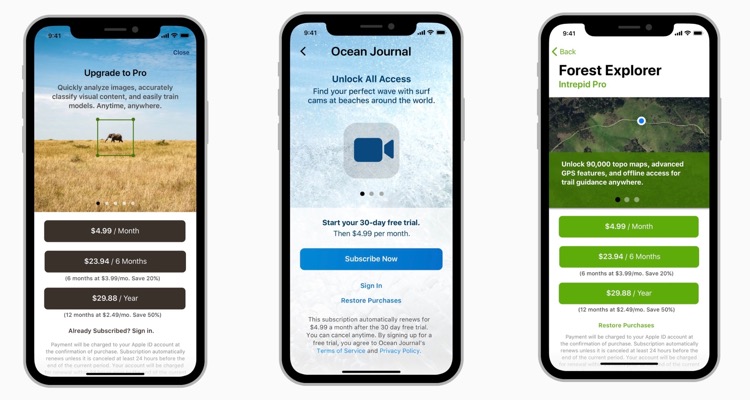 The average price of an in-app purchase (IAP) in the U.S. on the iOS App Store has increased 40% year-over-year (YoY) in the month of July. That number is 9% on the Google Play store. With the Consumer Price Index up 8.5% YoY, people are seeing prices rise almost everywhere. Apptopia data has been tracking consumer behavioral shifts due to these rising prices, and we now see the app stores are no exception. 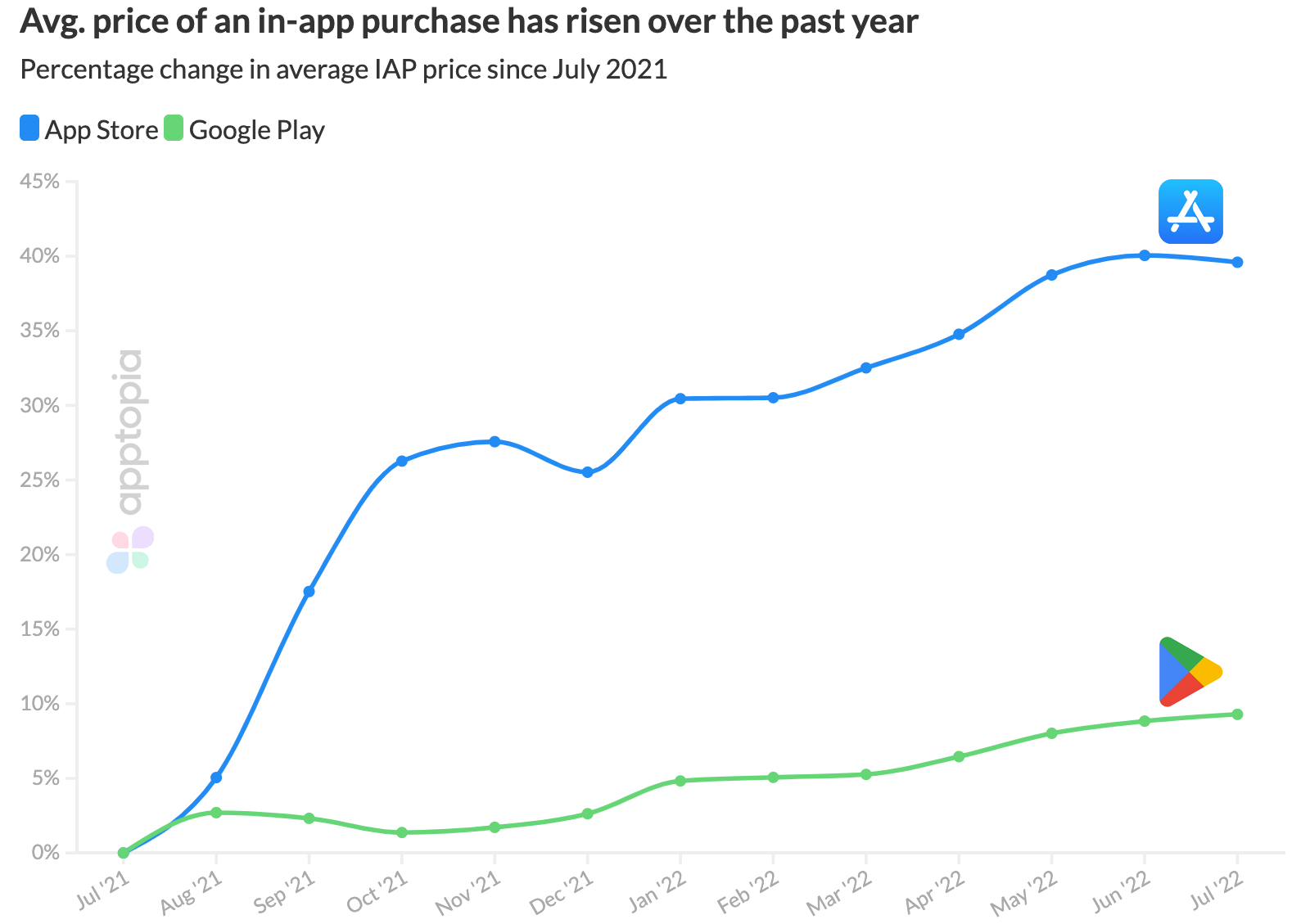 You'll notice the rise on iOS comes much before inflation (not the case for Google Play) hit hard in 2022, indicating publishers may actually be reacting to increased effective cost per install (eCPI) due to Apple's App Tracking Transparency (ATT) policies making it more expensive to acquire users. Data from mobile measurement company, Adjust, shows the rise in eCPI correlating with that of IAP prices going up. eCPI is essentially how much it costs to get a new user to install a publisher's mobile app. 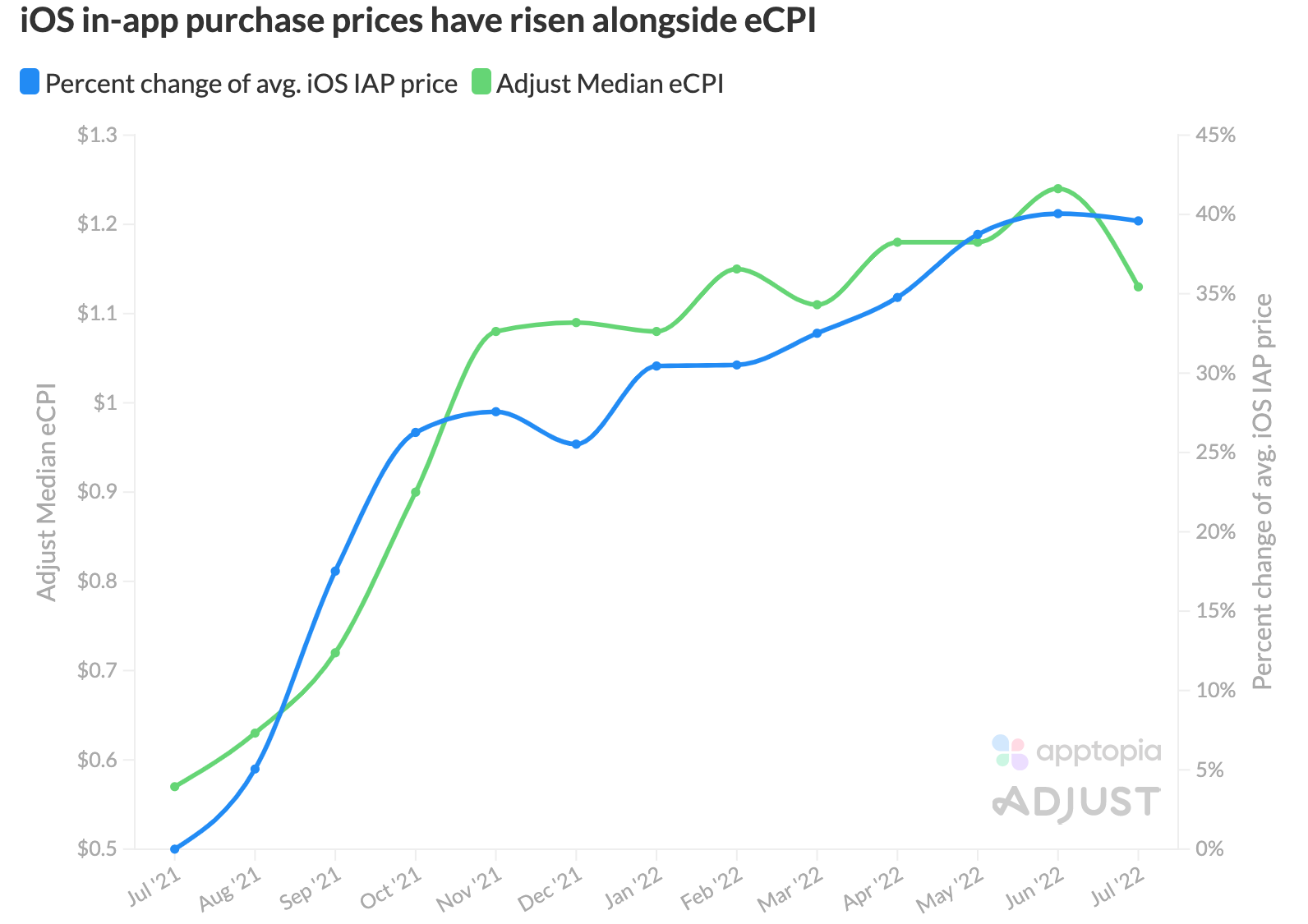 Prices have risen significantly more on the App Store than Google Play, so we wanted to determine if all IAPs were affected equally. It turns out that single-purchase IAPs (maybe a new skin in Tennis Clash) increased much more than IAPs for monthly or annual purchases (maybe full year access to Headspace). Average pricing of iOS single purchase IAPs rose 36% YoY in July while annual + monthly IAPs increased only 19%. Publishers are trying to present a value and hook customers for longer to cut down on acquisition costs. 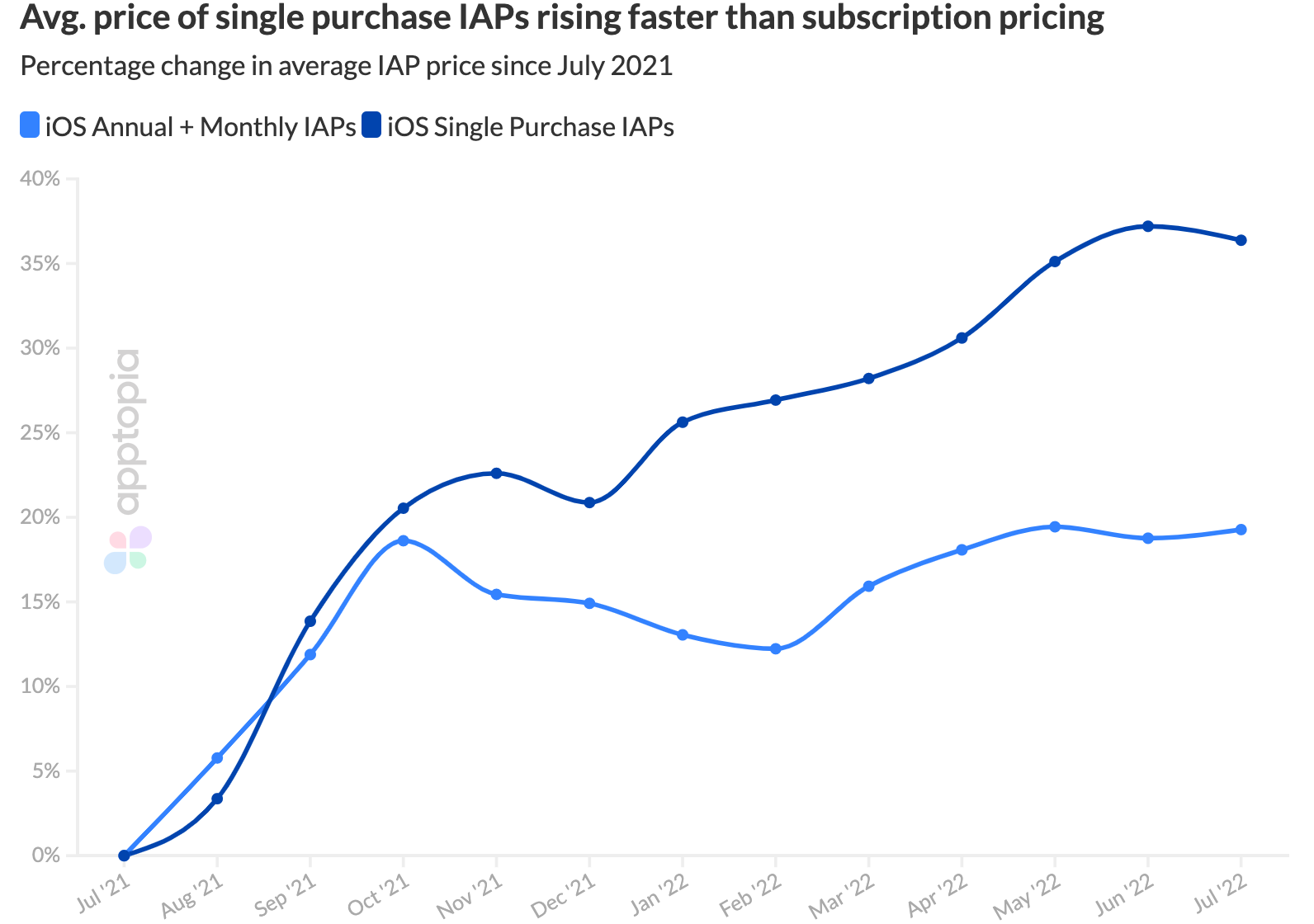 If you're thinking these percentage increases seem very high, you just need to remember that in terms of absolute numbers, these price increases are not that much. For example, Metronome Beats: BPM Counter increased its Metronome Beats Pro IAP from $3.99 to $4.99, a jump of 25%. In another example, Pinkfong Baby Shark increased its IAP to remove ads by 100%, moving from $1.99 to $3.99. 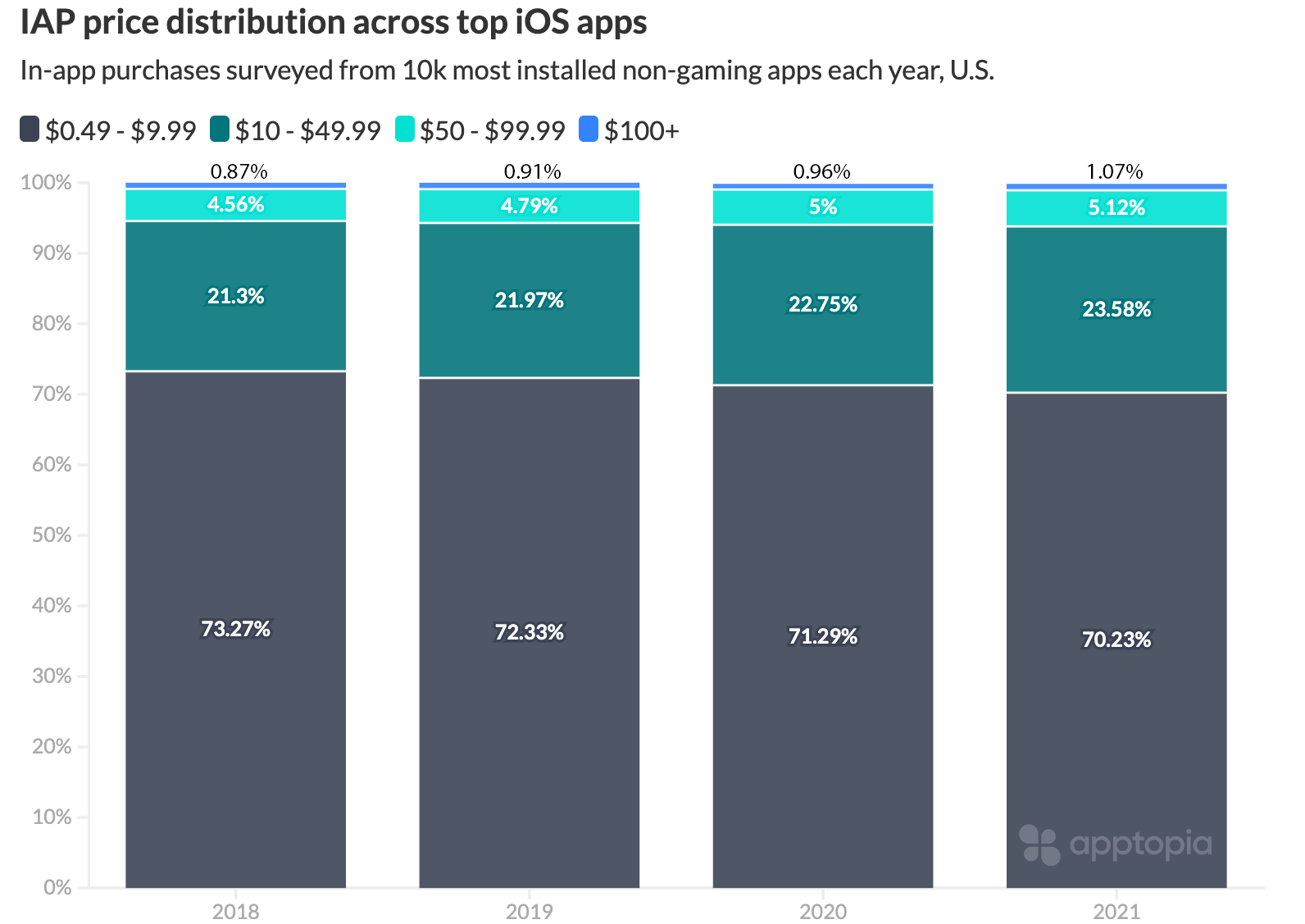 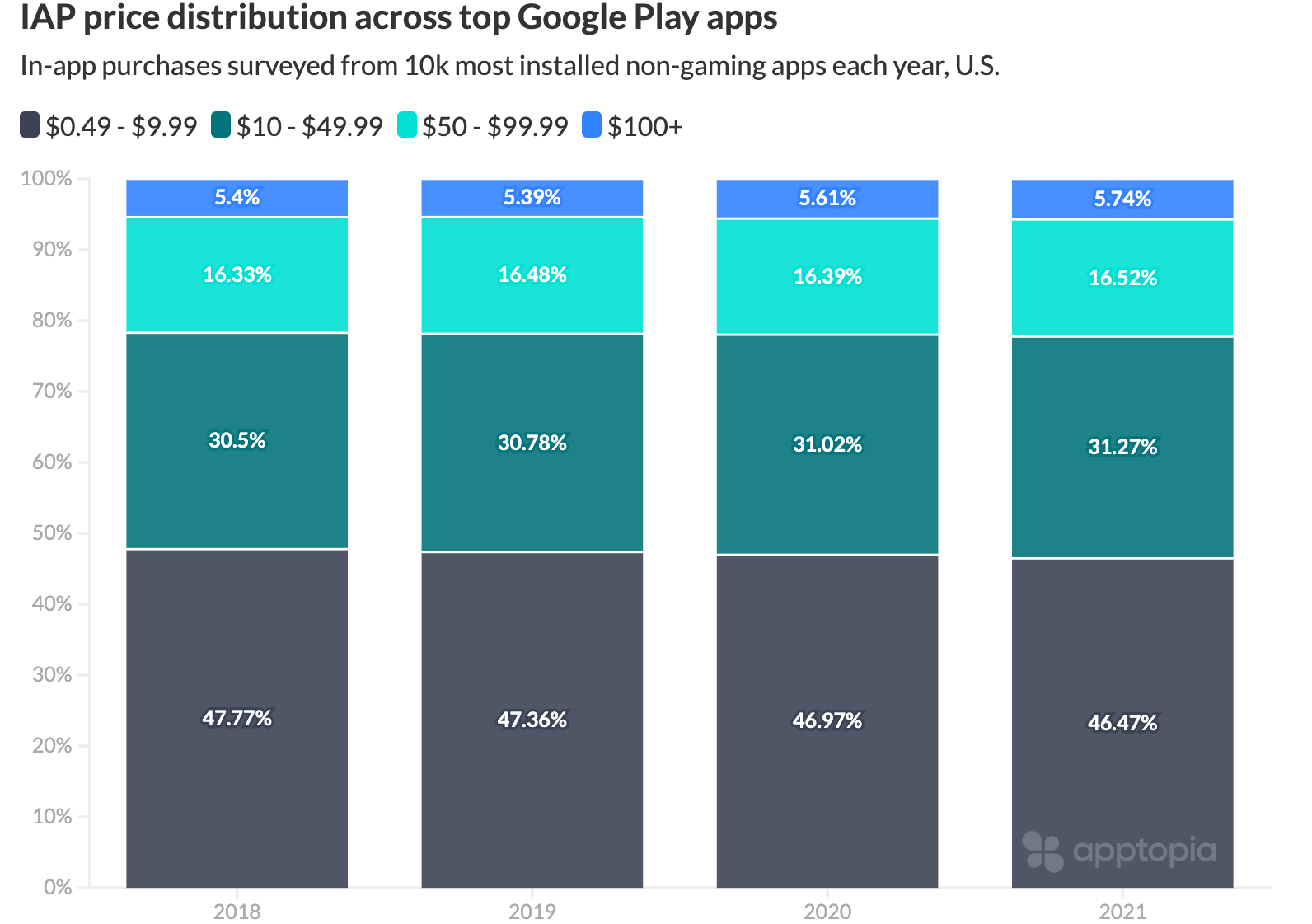 Looking at the price distribution changing throughout the years (above), the slice of IAPs listed at $100 or more has increased 23% since 2018 on iOS and 6.3% on Google Play. All buckets of pricing with the exception of the largest/least expensive have been steadily trending upwards.

Chat with an app data specialist